Last week, I shared a brief history of wine in Southern California. Los Angeles and San Gabriel may have been where things started, but as the population expanded, the outlying areas of the Cucamonga Valley were where the largest, and most successful vineyards were grown. When I left off last week, we were at the time of prohibition, but I want to take a step back a bit….

I had the opportunity to go wine tasting at the GalleanoWinery in Mira Loma. While tasting some of their wines, in walks Don Galleano, third generation winemaker. Next thing I know, we are going on a private tour of the property, and winery, and learning the amazing history of this property.

Don Galleano told us that the property was originally owned by Colonel Cantu (the first territorial governor of Baja California). In the 1920, due to political changes in Mexico, Col. Cantu moved to California, and purchased a ranch in Wineville (now Mira Loma). The house that still stands on the property is the original house, but now with a wine cellar, and a different front door (as the original door faced north, accepting all the winds and dust that flow through the Cajon Pass).

In 1927, Don’s grandfather, Domenico purchased the ranch from Cantu. Domenico had moved from his homeland in Italy in 1913, spending time as a farm owner in what is now Ontario. Wine was made in the newly remodeled ranch house cellar, and grapes were grown on the 160 acre ranch. Note that this was all going on during Prohibition. Domenico produced sacramental wine, but mainly sold grapes for home winemakers (who were allowed under the 18 amendment to make wine for personal use). 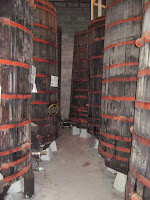 After Prohibition, Domenico and his son (Don’s father), Bernard “Nino” opened their winery for commercial business. In the late 1940’s, the winery had outgrown itself, and they build a new winery building and tasting room, which is what you see today.

Today, Galleano is one of the few wineries that still makes a traditional Angelica, made with Mission grapes and brandy. The Mission grapes and Palomino (used to make their sherry-style wines) are grown on the property. Zinfandel is the other major grape in their wine selection.

Don took us through the winery. Here, he showed us the large concrete fermentation tanks, and the impressive redwood fermentation tanks. These old tanks look to be original to the winery. Along the back of the winery are more modern stainless steel tanks. Here, we “barrel tasted” two different vintages of Zinfandel. These Zinfandels are deep in color, and fruity, with a hint of menthol. I must say, their dessert wines are worth the trip to the winery alone, but finding Mission grapes, and Cucamonga Valley Zinfandel is an added bonus. Galleano is currently the largest shipper of grapes in Southern California. 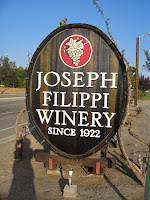 After spending the time with Don Galleano, we were inspired to check out another of the remaining wineries in Cucamonga Valley: Joseph Fillippi.  Joseph Fillippi winery is located just north of the Victoria Gardens Shopping Center, which was once home to Ellena Brothers-Regina vineyards. Their tasting room houses a large Cucamonga Valley wine museum, with bottles,  labels, and photos of the area. Their wine list consists of a large array of reds, whites, and dessert wines.

J.P and Gino Fillipi oversee 45 total acres, including old vines planted in 1922 by their grandfather, Giovanni Filippi. The largest remaining vineyard parcel (15 acres) is the Hippard Ranch Vineyard, located at Victoria and Etiwanda, in Rancho Cucamonga.  In the 1960s, the Filippi family added the site of California's oldest winery, Cucamonga Rancho (travel video), to their assets. Cucamonga Rancho was granted to Tiburico Tapis, by the Mexican Governor of Alta California, in 1838. Tapia constructed an adobe home on Red Hill and raised cattle. He also began a successful winery, portions of which stand today, known as the Thomas Winery. The Thomas Winery was in production through the mid-1960′s and became a popular destination for travelers along Route 66. The Thomas Winery building is a California Historic Landmark (#490), designated as the oldest commercial winery in California. The “Wine Tailor” was opened in this location in 2004 as a custom winemaking franchise.

In 1995, it was Gino Filippi, who successfully established the Cucamonga Valley AVA with  the U.S . Department of Treasury.

The only other winery in the Cucamonga Valley AVA is Rancho de Philo. It is a smaller winery, that is only open one week a year, to sell its’ Triple Cream Sherry. While I have not been there, I have been told the one week they are open, is in November, and they stay open until their stock of Sherry is sold out. The winery was established in 1973. (Check my blog on Rancho de Philo, as I have now visited this winery since this article was published)

In the 1940’s there were over 60 wineries and 35,000 acres of vineyard. Today, only about 800 acres, and the three remaining Cucamonga Valley wineries: Galleano, Joseph Filippi, and Rancho de Philo. You really need to visit these wineries, as urbanization continues to spread, and the value of land goes up, the remaining vineyards will disappear, and the wine industry will cease.  Our wine heritage is disappearing.

Southern California wineries have also moved south to the Temecula area. I’ll take a look at this area in an upcoming blog.
Posted by The Sommelier: