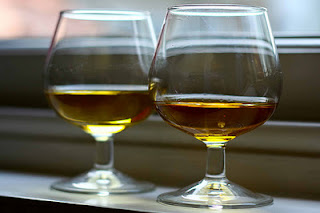 Last week, our wine club held a Spanish tasting. In addition to the wines of Rias Baixas, Ribera del Duero, Rioja, La Mancha and Priorat, we began and ended the night with the wines of Jerez. Not familiar with those? I bet you've heard of Sherry.

There was a common reaction when I started the evening with a bottle of Manzanilla Sherry..."I don't care for Sherry, it's too sweet". It was my mission to re-introduce the tasters to the world of Sherry.  The tasting consisted of a small pour of Manzanilla, paired with their choice of: Cabrales Cheese, Marcona Almonds, Manzanilla Olives, and/or Serrano Ham. I ended the evening with a pour of PX Sherry, served over a scoop of vanilla ice cream (yes, this one was sweet). I gave a brief talk about Sherry, but thought this might be a good vehicle to expand on it a little more.

Sherry is a protected/registered name for the fortified wines produced in the Cadiz region of Southern Spain. The growing area is a triangle bordered by Jerez, Sanlucar de Barrameda, and El Porto de Santa Maria. This is a hot, dry region, nestled right up against the Mediterranean Sea. This area is known for it's chalky white soil, known as "Albariza". By law, 40% of the bottled Sherry must come from grapes grown in this soil. The unique feature of this soil is it's high content of chalk (which can absorb the limited rainfall, and retain it during the summer months), and the ability to reflect the sun back up to the grapevines, for improved photosynthesis.

All three grapes grown on the region for Sherry are white grapes. They are Palomino, Pedro Ximenez (PX) and Moscatel. Palomino is the main grape used in all dry Sherry. PX and (to a lesser extent) Moscatel, are used to make sweet Sherry, or used to sweeten dry Sherry. By itself, the Palomino grape produces a rather neutral and bland wine, but this is the perfect type of grape for the process of making Sherry, as the processes used will determine the final product.

As mentioned, Sherry is a fortified wine, meaning that a distilled wine (brandy) is added to the still wine at some point in the process. In the case of Sherry, the juice is fermented to dryness, and the brandy is then added (unlike Port, where the brandy is added before fermentation is completed, to preserve the residual sugars). Here is a little trivia for you...traditionally, the grapes for Sherry, were foot trodden (not done much any more), after adding a small amount of gypsum (to adjust for the low acidity). This was known as "plastering". So if you ever get "plastered" you now know where that saying came from. Back to the vinification process...Before the brandy is added to the still wine, the winemaker will sample the wine, and make a determination of its' future. A mixture of brandy and wine (known as "mitad y mitad") is added to the now fermented wine, and the total alcohol level is brought up to 15% (to allow the growth of "flor") or to 17.5% (to prohibit the growth of "flor"). Flor is a naturally occurring film of yeast that grows on the surface of the wine. This film serves to protect the wine from oxygen exposure. The flor contributes to the nutty, yeasty flavors of the final product.

Sherry is a "fractionally blended" wine. What this means is that the bottle of Sherry you purchase, can be a blend of many vintages of wine. Picture a bunch of wine barrels (typically American Oak is used for Sherry), stacked on top of each other. The top barrels contain the newest vintage of wine, the row below it is a year older, and so on, all the way to the bottom row of barrels, which contain the oldest wine. As wine is drawn off the bottom barrel, a little from the barrel above is added in, and the then the barrel above that one is added in, all the way back up to the top barrel. This system is known as a "solera" system. By using this process, there is a consistent style produced by the winemaker, year in and year out. Every bottle can, and will, contain some portion of wine going back to the beginning of the solera.

There are numerous styles of Sherry produced:
Have you ever noticed that both Sherry and Port, have English names on the label? If you go back in history, you find that the English dominated the shipping lanes, and imported wines from all over the world. Cadiz was the site of a famous incident involving Sir Francis Drake. After he had sacked the port, and returned to England with a ship full of Sherry, England's thirst for the wine grew. many English families moved to Spain and took over the wine cellars in the region. Think: Sandeman and Harvey's. Cream Sherry used to be one of the most popular beverages in the United States, particularly in the South and East.

So, are you ready to venture into the world of Sherry? Next time your order that big plate of seafood paella, consider a glass of Sherry, and let the magic begin.
Posted by The Sommelier: