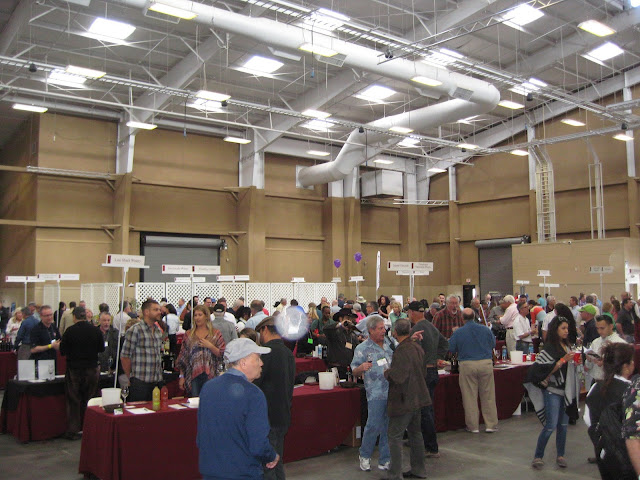 It is spring time, and that means the annual return of the California Family Winemakers event in Southern California. This year, it was once again hosted at the Del Mar Fairgrounds.  The event is both a trade and consumer tasting, with an opportunity to not only meet the owners, winemakers, and distributors, but an opportunity to taste their wines. The gathering is also an opportunity to meet some of the smaller production wineries, alongside larger producers. This year seemed like there were less wineries participating. By my count there were 79 wineries in attendance, as well as cheese and bread stations sponsored by Kerrygold and LaBrea Bakery. 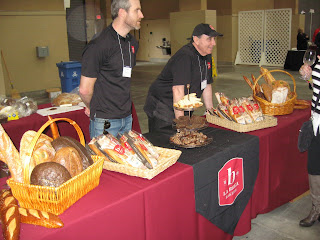 The focus of the California Winemakers Event is to highlight family-owned wine producers from across the state. This year, there were a lot of the same wineries as in the past, but there were also eight first time attendees.

As some of you are aware, for the last 13 months, I have been working with some business partners to acquire a restaurant. My original intent was to attend this event for the purpose of developing our wine list. Unfortunately, somethings just don’t work out. Our restaurant purchase fell through at the last minute (real disappointment after such a long process). So, once again, this year I attended as a media representative. As such, I was able to enter two hours before the general public.

My first stop was a C.G. D’Arie winery. I had visited their winery in the Shenandoah Valley last fall, and really enjoyed their wines. I was hoping to meet Chaim Gur-Arieh, in person, but he was attending another event. I did have a good conversation with his Southern California distributor, and tasted some wonderful wines. My favorites are still their Zinfandels, but they make very nice Barbera, Tempranillo and Syrah. Based on their recommendation, my next stop was with Vino Noceto winery. 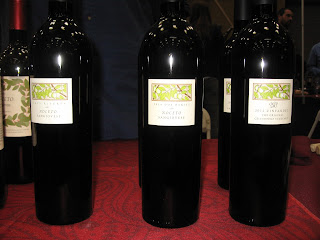 Vino Noceto is also located in the Shenandoah Valley, of Amador County. The winemaker, Rusty Folena, was pouring wines. His tasting consisted of Barbera, Zinfandel, and Sangiovese. The focus here is on Sangiovese.  They even call themselves “California’s Sangiovese Specialists”. They produce seven different Sangiovese wines, from different clones of the grape. Each wine was distinct. This winery is definitely on my list for the next visit to the Sierra Foothills. 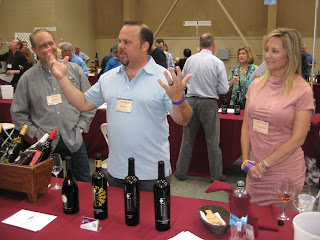 We wandered around, and tried a few wineries that seemed to be gathering a lot of tasters. But, nothing really stood out. We then stumbled upon Englemann Cellars. Bret Engelmann, the owner/winemaker was a first time attendee. What caught my eye was where his winery is located: Fresno, Ca. When I think of this area, I think Thompson Seedless, and raisin production. I guess I’ll have to rethink this area. Bret was pouring Malbec, Cabernet Sauvignon, Zinfandel, and his Bordeaux style blend (Cab Franc, Cab Sauv, and Malbec). His Malbec had a spiciness to it, that was more reminiscent of a French Cahors, but without the same earthiness. His Clark Ranch Zinfandel was nice and jammy.

Hawk and Horse Vineyards, from Calistoga presented a couple Cabernet Sauvignons, but what excited my palate was their dessert wine.  This was a dark, concentrated wine with aromas of chocolate, cassis and cherries. Nicely balanced. 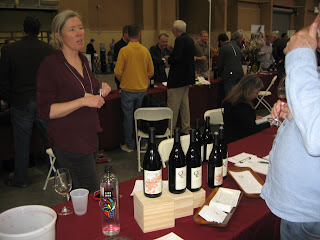 My favorite Pinot Noirs of the tasting came from another first time attendee: O’Connor Vineyards. Here we tried three different vintages from the Green River area of the Russian River Valley. They are extremely small production, only about 300-400 cases per year. Their wines are more Burgundian in style, versus most California Pinot Noir. They are light, with nice acidity. The nose has some nice notes of cherry, spice and a bit of earth. For me, the 2014 vintage was the favorite.

We bounced around to a few other wineries, and then met Herve Brukert, owner of De Novo Wines, out of Oakland, CA.  Unlike some of the other winemakers in attendance, they do not own any vineyards. They purchase all their grapes. We tried a mix of Cabernets, and Pinot Noirs. We learned that Herve has a cousin in Alsace, France, and he imports wines for his cousin. Because this was a California wine tasting, he wasn’t allowed to pour the Riesling….but somehow, I was able to get a taste. Pretty nice.

We ventured around some more and tried the huge wines of Keenan. If you like big Cabs, and Merlots, this is your winery.  Another was Greyscale Wines. Here we met Jean and Larry Rowe, the owners.  If you like the “dusty” flavors of Rutherford Cabernet Sauvignon, then try their 2014 Cab. Very nice wine, and nice people too.

Following an afternoon of tasting, we headed down to San Diego, where we had dinner overlooking the ocean. Not a bad way to spend a rainy spring Sunday.

If you have never attended the California Family Winemakers Event, I would highly recommend it. They conduct tastings twice a year: one is Southern California and a second in Northern California. It is an easy way to taste a number of different wineries in a short time. The key word is “taste”, not “drink”.
Posted by The Sommelier: 1 comment: