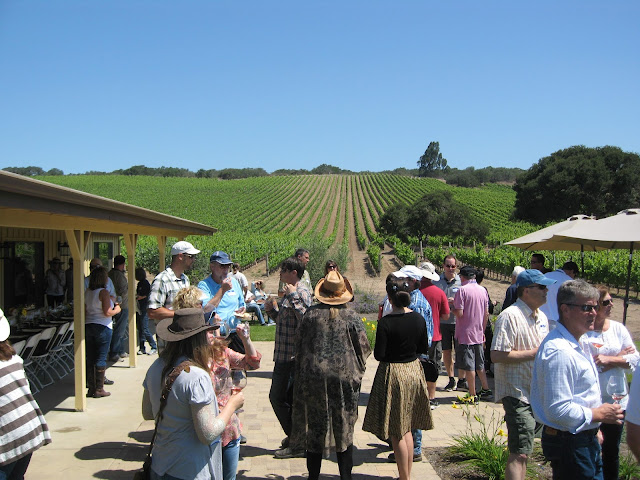 We arrived at the Vineyard. A long table, set for 50 people was located in the shade of the vineyard house. As we checked in, we were promptly handed a glass of Dragonette Cellars 2014 Rose of Pinot Noir, then greeted by all of the owners. I have known the owners since we first met in 2008, and this is the first time I have seen everyone in one place.

All this was for the introduction of Dragonette Cellars’ first ever Chardonnay. But, why this particular vineyard? What was so special?

The Duvarita Vineyard is located just outside of Lompoc, and right outside the border of the Santa Rita Hills AVA.  The first things you notice are the sandy loam soils, the breeze coming from the west, and the sun located directly overhead.  A closer look at the vineyard, and it is very apparent how low the trellis systems are: less than two feet off the ground. The rows are seven feet apart and about three feet between vines.

We headed up the south facing slope, 26 acres of vineyard surrounding us. As we moved into the Pinot Noir block that Dragonette Cellars farms, we stopped and discussed what makes this vineyard special. The sandy loam soils allow for excellent drainage, but also retain moisture. This area receives only 14” to 15” inches of rain annually, so an automated drip irrigation system supplements the needed moisture for ideal growing conditions. The vines are cane pruned low to the ground, to protect the vines from the constant winds. The lower hanging berry clusters then benefit from the radiant heat of the earth (the sandy soil reflects the heat nicely).  Wind removes the evaporative capability of the vine, stressing the grapes and creating thicker skins. Managing the wind is key. One of those approaches is to prune the leaves. Typically leaves are left on the west side to protect from the late afternoon sun, but at Duvarita they thin the leaves on the west side to open up the canopy thus letting the wind pass through easier. The entire vineyard is biodynamically farmed.

In the distance, we could see the newest vineyard that Brook and Cody are working on. It is higher up on the slope and the soil is currently being prepped. Brook indicated that they will be experimenting with head trained vines on that property. Interesting!

Lunch was provided by Cecco Ristorante and included wood fired pizzas from Chef David’s mobile Italian brick oven. I sat with Brook and Cory Williams, the owners of Duvarita Vineyards. During lunch, I learned more about this unique location.

The property dates back to being part of the original Rancho Santa Rita land grant that was given in 1845 by Governor Pio Pico to José Ramón Malo. Presidio Winery purchased the land in 1999 and the Presidio Vineyard was planted in 2000. In November 2012, The Williams purchased the Presidio Vineyard. The Presidio Winery kept their name, so they renamed the vineyard. The Duvarita name comes from the combination of their parents names: Durrell and Virginia, plus “rita” for the local Santa Rita Hills. While this vineyard is outside the AVA, it is often referred to as “Super Rita”, because of the unique fruit grown there.

Duvarita Vineyard grows Viognier, Pinot Gris, Chardonnay, Syrah (at top of vineyard) and Pinot Noir. Pinot Noir is the dominant variety grown. As mentioned, all the grapes are grown biodynamically. Currently, they are two years into the three year certification process. They are also members of the two leading sustainable winegrowing organizations, California Alliance of Winegrape Growers and the Vineyard Team. They supply grapes to some of the best wineries in the country: Chanin, Dragonette, Storm, Tatomer, Ojai Vineyards, Jaffurs/Mistress and Denner.

Back to our reason for showing up…the new Dragonette Cellars 2014 Duvarita Vineyards Chardonnay.  We tasted barrel samples along with appetizers of prosciutto wrapped figs w/ gorgonzola. The Chardonnay is developing nicely. Neutral oak aging and limited malolactic fermentation makes for a clean, Burgundian style Chardonnay. Pre-release orders are now being taken (hint: I placed my order, so they must be good, right?). Roasted beet salad, grilled vegetables w/ toasted couscous along with pizzas were paired with the 2013 Santa Rita Hills Pinot Noir, and the 2013 Duvarita Vineyard Pinot Noir. A special pouring of the 2009 Presidio Vineyard Pinot Noir (same vineyard, different owner and name) topped the afternoon. Only 18 bottles of this rare library wine were available…guess who has one again (I drank the ones I originally had). 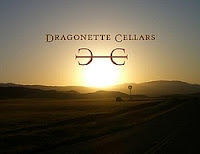 In the time I have been following Dragonette Cellars, I have been impressed not only with their winemaking skills, but their ability to identify the best vineyard sites and the blocks within those vineyards. They craft wines that reflect the individual vineyard in which they are grown. This was a chance to come see one of those vineyards up close and to understand why it is one of the best in Santa Barbara county.
Posted by The Sommelier: No comments:

How are your memories? 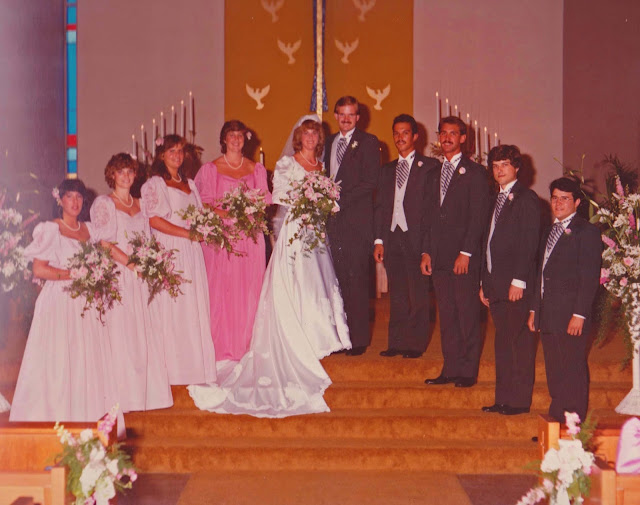 My wife and I recently celebrated our 31st wedding anniversary. Over the years, gifts, cards, flowers and the occasional dinner out were the norm. This year we went with the dinner out plan, but did a little twist that will remain a positive memory.

A month ago, I wrote about a great wine pairing dinner we had at the Lake Arrowhead Resort. Since then, I have gotten to know Chef Rodriguez, and have been impressed with his creativity and skill as a chef. As a Sommelier, I am always looking for intriguing wine pairings. So, this year, I called Chef Rodriguez, and asked if he would be working on our anniversary (which he was) and would he break from the regular menu and create a dinner experience? He was excited for the challenge. The only thing he asked was if we were allergic to anything (thankfully, no).

When we showed up at the Bin 189 Restaurant, I had two bottles of wine in my carrier. I never told the Chef what I was going to bring (adding to the challenge). He anticipated a white and a red (correct), and further anticipated a Chardonnay and Cabernet Sauvignon (close). This night I brought an older Pouilly Fuisse, the 2005 Chateau De Beauregard (Chardonnay) and a bottle of 2008 Sea Smoke Ten (Pinot Noir). When I revealed the wines, the 4-course dinner was described, and the Chef made his adjustments to the recipe. What follows is a recap of the meal.

The Chateau De Bearegard Pouilly Fuisse was deep gold in color, just what you would expect from a 10 year old Chardonnay. The acid was still present, and the wine had aromas of melon, pear, honey, minerals, just a touch of oak, and a somewhat petrol taste, that only an aged Chardonnay can produce. 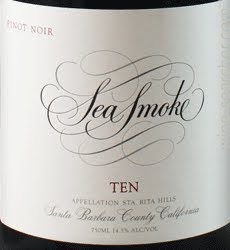 The Sea Smoke Ten was opened early, to get a bit of air into it. I wish we had decanted it, as it was still a bit tight. This was a medium weight Pinot Noir, with notes of cherry, earth, and vanilla. Medium plus acidity, but a bit “hot” on the alcohol side.

The first two courses were paired with the Pouilly Fuisse, and both worked wonderfully. The first course was a Tempura Avocado with Cuban Ceviche. The tempura batter was made with rice flour, giving it a very delicate crust, which gave a nice contrast to the creamy avocado inside. The Cuban ceviche included serrano peppers, apple and cilantro stocks (as the chef explained…the stocks give more flavor than the leaves).

The second course was seared Ahi on a bed of greens. The Ahi was encrusted with a simple pepper and sesame mixture. Once sliced over the greens, a ponzu sauce added the finishing touch.

For our third course, the Chef made some changes to his ingredients, to better pair with the wine. While it was a single course, my wife received a different entrée than mine. We ended up sharing between the two of us. My wife’s course was a perfectly cooked venison tenderloin with a blueberry risotto accompanied by asparagus. My course was a beef tenderloin served over garlic/cheddar mashed potatoes, but here is where things took an interesting turn…the chef added huitlacoche to the sauce for the beef. Huitlacoche is also known as “corn smut” and fungus that grows on the corn kernel, similar to a mushroom. The flavor is very earthy, almost as strong as a truffle. I found it funny that the chef just happened to have some of this on hand, as if he was just waiting for the right moment to use it. To his credit….this was the right time. A wonderful addition to pair with a Pinot Noir.

Our final course was dessert. Chef Rodriguez served us his take on Bananas Foster, which he referred to as “Bananas en fuego” . Instead of the normal rum, he used a rough Tequila. When lit, the remaining Tequila flavor is stronger than a fine Tequila. The bananas were served with dolce a leche (a freshly made caramel ice cream.

What will you do on your next anniversary, or celebration? If it is something special, you will remember the experience for a longer time. Important memories last forever, and simple experiences like a dinner challenge with your favorite chef can conjure up a smile on your face each time you share it with your friends. I hope this experience will inspire you to create some great memories.