When one of the three remaining wineries in the Cucamonga Valley opens its’ doors only one week out of the year, the only thing to do is rush over, and check it out. In last week’s blog, I shared some of the history of the Cucamonga Valley, and the three remaining wineries. Of those three, the only one I hadn’t visited was Rancho De Philo. They make only one wine: an award winning Triple Cream Sherry. I had the pleasure of visiting their winery, and was pleased with this new “find”. 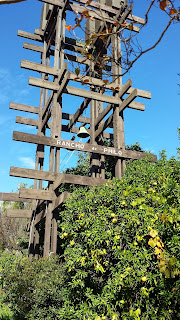 Rancho de Philo doesn’t have a website, so finding out when they are open to the public can be a bit difficult, unless you get on their mailing list (which I now am). From what I can determine, they open on the second Saturday in November, and remain open for about 7 to 9 days, or until their inventory of wine runs out. They only bottle a little over 300 cases per year, and as the word gets out, the inventory will be depleted even faster.

Rancho de Philo is located in Alta Loma, just northwest of Chaffey College, at 10050 Wilson Avenue. Their hours are from 9:00am to 5:00pm. I drove there on Sunday, and found a sign on the road, indicating “Sherry Sale” which pointed me to the driveway of a 6.5 acre piece of land, surrounded by expensive homes, overlooking the valley below. A vineyard in this area seems out of place, but given the history of the area, it is not so far-fetched.

As I pulled up, I was greeted by a young boy, who encouraged me to sign their guestbook and get on their mailing list. There was a small umbrella set up in front, with almonds, cookies, crackers and small tasting glasses. It was here, that I met the owners, Janine Biane Tibbetts and later, her husband Alan. Janine was pouring three different bottlings of their Triple Cream Sherry: 2013, 2012, and 2011. Their Sherry is created by using the Spanish solera system, a fractional blending system. 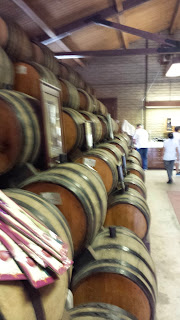 Solera systems consist of a pyramid of barrels (in the case of Rancho de Philo it is 15) stacked in a racking system, where the top layer of barrels will contain the youngest wine (the latest vintage), and the bottom level will be a blend of the wines above, and is where the latest bottling is drawn off. As wine is drawn off, the barrels are filled from the level above, blending all the different years, for a consistent product. All the time, the wine continues to oxidize, creating a nutty, raisiny flavor, and turning the wine to a wonderful amber color. Rancho de Philo uses neutral American Oak barrels (used barrels from whiskey distilleries) in their Solera system. But there is a difference between Spanish Sherry and Rancho de Philo Sherry. Traditional Spanish wines are made with Palomino or PX grapes, but Rancho de Philo uses 100% Mission grapes (Southern California’s original grape, brought in by the Spanish Missionaries). Make no mistake, this Sherry is a dessert wine. Since it is a fortified wine, the alcohol level is around 18%, and the residual sugar comes in above 13%.

I had a brief opportunity to talk with Janine, and learn a little about the history of the property, which was started by her father, Philo Biane. But, the winemaking history of her family goes back much further. She told me that her grandmother’s family, the Vachés, arrived from France and settled in San Juan Bautista in 1832, where they planted grapes and built a winery. They later had a winery in downtown Los Angeles, called Vaché et Cie. In the late 1800s they planted a vineyard and opened a winery near Redlands in the San Timoteo Valley. There was a brook adjacent to the winery so they named it Brookside Winery. The Vaché and Biane families met, and eventually produced a son, Philo Biane (Janine’s father). Rancho de Philo was founded by vintner and wine industry pioneer Philo Biane in 1973, after he retired as the President of Brookside Vineyard, which was sold to Beatrice Foods. He made his first Sherry bottling in 1974, from the grapes on the property. Unfortunately, those grape vines had to be replaced around the time of Philo’s death, in 1999, when they were attacked by Pierce’s Disease. They were able to salvage cuttings from the remaining 30+ vines, and replant. So, the current vines are only about 10 to 14 years old, but do come from the original Mission grape rootstock.

Janine told me they no longer ferment the wine on the property, as too many of the neighbors complained about the fruit flies. So, she ships her wine to Galleano Winery for fermentation, then brings it back up for aging in the solera. Her family has a longtime relationship with the Galleano family, so much so, that the three friends, on the label of the award winning Galleano "Three Friends" Port, are her family members.

Rancho De Philo was recently named the top microwinery in California, for its’ style of wine, and their Triple Cream Sherry continues to reap awards at local, national, and international competitions.

Don’t miss out. Buy it now, and enjoy for the holidays and beyond. And, don’t worry about that open bottle. Since this is and aged, and oxidized wine, it will hold just fine, sitting on your kitchen counter, waiting for you to enjoy.
Posted by The Sommelier: