The Sequel to Sideways: Vertical 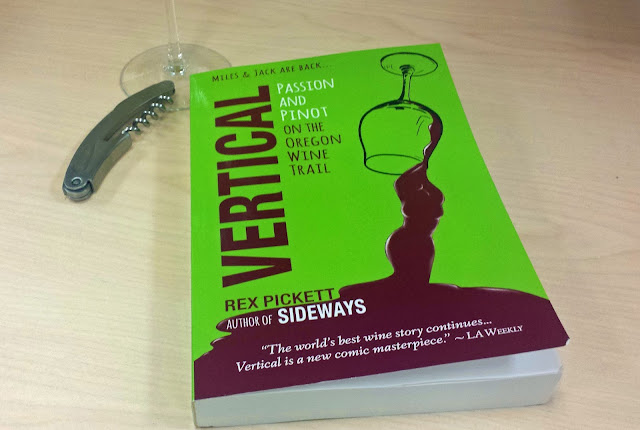 Twelve years ago we saw the fall of Merlot and the rise of California Pinot Noir. The movie, Sideways was released, and we all followed Miles, an aspiring writer, and his friend Jack, a washed up soap star, travel through the Santa Ynez Valley on a wild wine binge and sex romp. We met Maya and Stephanie (Terra in the book), and the ultimate betrayal of love. When we last saw them, Jack was getting married, and Miles, still unpublished, was meeting up with Maya.

Flash forward, and Rex Pickett has written a sequel to his book (and the movie), called “Vertical – Passion and Pinot on the Oregon Wine Trail”.  A previous version of the sequel was released a few years back, with a very limited press run. I received the newly revised and re-edited edition for review. While I do wine and wine event reviews, it has been a long time since Mrs. Whirry’s Honors English class in high school. I think the last book review was a comprehensive review of the works of Kurt Vonnegut!

Vertical takes place seven years after the events of Sideways. Miles and Jack have switched roles. Jack’s marriage has ended in divorce, and Miles has a successful book, that was turned into a movie: “Shameless”, which recaps the entire adventure we all watched (or read) in Sideways.  Miles’ success with the book and movie, have made him a rockstar in the world of wine, in particular the world of Pinot Noir.

Once again, Miles and Jack set out on a trip. This time, Miles’ mom (Phyllis) and her caretaker, a pot smoking Filipino named Joy, are along for the ride, as well as Phyllis’ dog, Snapper. Phyllis had suffered a stroke, and needs to go home to Wisconsin to be with her sister. Miles, who is afraid to fly, will drive his mother to Wisconsin, but is coordinating the drive with speaking engagements in Paso Robles, and the International Pinot Noir Celebration in the Willamette Valley.

Miles and Jack seem to be in a continuous drunken stupor for the first three quarters of the book. They clearly have a drinking problem (and sex or relationship issues) that starts with an open bottle for breakfast, and continues while driving the rented rampvan down the highway. Miles’ drinking problem becomes self-evident after he almost drowns in a tank of Two-Buck-Chuck Merlot, and is later forced to continue his journey to Wisconsin, with his handicapped mother, on his own. 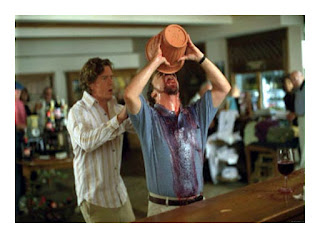 At this point, the reader realizes this is more of a story about a mother and son, coming to grips with their lives as they currently are. The back drop, and possibly the source of Miles’ current condition, is his celebrated wine grape. Is it just by chance that the first book was titled “Sideways” (the position that many feel when they’ve had too much) and the second book is title “Vertical” (the position you might be in, once you sober up)?

75% of the book takes place in wine country. For anyone who has traveled to the wine regions of California and Oregon, the descriptions are very accurate. You can picture the entire trip. The other 25% takes place in the desolate landscapes of Montana, South Dakota and Wisconsin. It is here, aong the barren countryside, that Miles’ soul is stripped clean to the understanding of who he is and who is mother is. I will admit that there were many scenes I chuckled at, many scenes I could easily visualize, and one scene, towards the end, where I actually shed some tears.

For those of you who love Pinot Noir from the California Central Coast… be prepared. Those beloved wines do get a pretty good amount of disrespect from Miles when he addresses a large crowd at the IPNC. Of course, he is in Oregon, and is playing to the crowd. Can we now expect a shift from California Pinot Noir to Oregon Pinots? 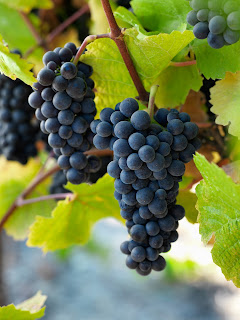 The book was a quick read, at almost 400 pages. Rex Pickett has a large vocabulary, and has included a personal dictionary at the back of the book for some of his more obscure words. If you are a fan of Sideways, check out this sequel, when it is made available. I hope that if they can get enough sales of the book, they will consider a sequel to the movie, and we can all watch Miles and Jack in their glory again.
Posted by The Sommelier: