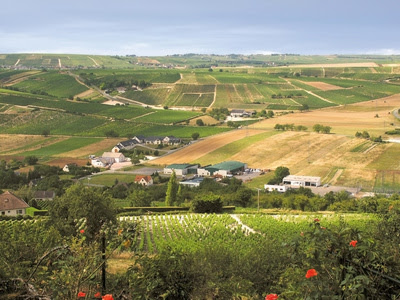 Whenever I talk about French wines, or do tastings, the first thought that people have is Bordeaux, Burgundy, Champagne, or maybe even some of the Rhone wines like Cotes du Rhone or Chateauneuf du Pape, but there are so many other wines and regions within France that get overlooked.

Those of you that follow this blog, have read my comments about Reislings from the Alsace region, and some of the Roses that are coming out of Provence. But some very good wines (at great prices) are coming from the lesser known regions of the Sud-Ouest (or Southwest France), which includes over 30 different AOC's.  The Sud-Ouest is the area located between Bordeaux and the Pyrennes Mountaines. Some of my favorite wines come from Jurançon, Cahors, Madiran, Irouléguy. Additionally the Loire, and Alsace don't seem to get the same attention that the better know regions of France get. Some of the finest examples of Sauvignon Blanc, Chenin Blanc and Cabernet Franc come from the Loire.

Outside of Champagne, traditional sparkling wines are called Crémant. They may or may not be made with traditional grapes, and can be very interesting variations from traditional Champagne. There are some other areas within France that do not carry the Crémant name. These areas typically make both a still and sparkling version of wine, so just go by the AOC name.

This week I conducted a wine tasting of "other French wines". The idea was to move away from the mainstream grapes and regions, and try something different....and to keep the bottle price under $20 (usually difficult for French wines). I served six wines, from some of the regions mentioned above.

The first wine was a sparkling wine: Vincent Raimbault NV Brut Vouvray. This wine comes from the Loire (Touraine district) and is made from 100% Chenin Blanc. Made in the traditional method, this straw colored wine, was bright, clean and has refreshing acidity. Aromas of lemon, grapefruit and flowers.

The second wine was a white wine from the Loire (the western most district of Nantais), made with the Muscadet grape (also known as Melon de Bourgogne): Pepiere 2010 Muscadet Sevre et Maine. I really liked this wine. Nice acidity, dry, a slight yeastiness due to sur lie aging. The classic wine match for Muscadet is seafood (in particular shellfish), and it worked well with the numerous shrimp dishes at the tasting, but I'd sure like to try it with some oysters!

Next was a Rosé from the Rhone region of Tavel: Mordoree 2011 Cotes du Rhone Rose La Dame Rousse. This full bodied, dry Rose was 40% Grenache, 20% Syrah, 15% Cinsault (and the rest Carignan and Mourvedre). Lots of strawberry and cherry, and savory, spice character, with a certain amount of earthiness.The finish was a bit bitter, and turned off some of the tasters, but others loved it.

The first red wine of the tasting was the Chateau du Cedre 2007 Cahors. Cahors is located in South West France just north of Toulouse. This is an ancient Roman wine producing region with evidence of vines being planted as early as 50 BC. The Cahors AOC produces red wines made with the Malbec grape (known locally as Cot or Auxerrois). Yes, Malbec was growing in France before it made a name for itself in Argentina. I would put this wine somewhere between a Cabernet Sauvignon and a Merlot. Nice plum, cherry, and cocoa aromas, and moderate tannins.

The second red wine was the Labranche Laffont 2005 Madiran. Madiran is a small appellation, only 3,200 acres of vineyard in total, but it makes big red wines from the Tannat grape. This was a deeply colored wine with dark berry flavors and moderate tannin. The seven years of age help mellow this wine, and presented a very smooth drinking wine. Lots of positive comments about this wine, and was one of the nights' favorites.

The last red wine was very young, and required pouring through an aerator. The wine was Bernard Baudry 2010 Chinon Les Grezeaux. Chinon is the commune, in the Touraine district of the Loire, for Cabernet Franc, and an excellent value at only $22.  The wine was bottled un-fined and un-filtered after spending 12 months in neutral oak (but did have a definite oak presence on the nose). It was full-bodied and probably should be held another 5 years before opening.

So, the next time you are talking French wine, remember that not all good wines cost $60 to $3,000. Sure they are great wines, but you can also find some very good (and different) wines from some of the lesser known regions of France. Continue to explore and try...there are great finds out there!
Posted by The Sommelier: