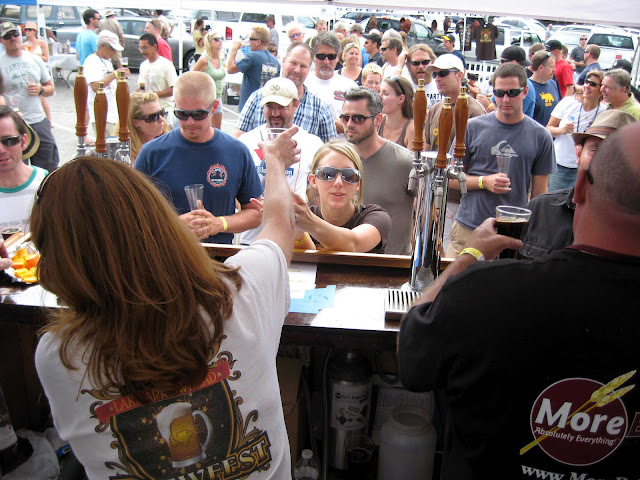 Yes, the wine guy does drink beer too! Those of you who follow this blog regularly know that I mostly write about wine, but the job of a Sommelier does include beer, sake, spirits and in some cases coffee and tea (which I'll leave to others to write about). Last year, I attended the 2nd Annual Lake Arrowhead Brewfest, and really enjoyed tasting all the different beers. This year, the Brewfest celebrated its' 3rd year, and a different venue. 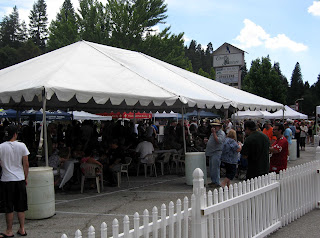 The 3rd Annual Lake Arrowhead Brewfest took place in the center of Blue Jay. The tents were set up early in the day (I know, since my office is across the parking lot). Gates opened at noon, and stayed open until 6:00pm. The entrance fee remained the same as last year, at $30/person, which included a souvenir glass, a program and discount coupons for the local businesses. Steve Nieto was at the music venue, and supplied background music and the occasional announcements. Every so often, the crowd would groan and boo, when someone in the crowd dropped their beer, and the sound of shattered glass broke through the conversation. 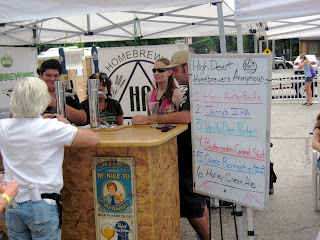 The turnout for this years' event was larger than last year (over 500 in attendance) and there were more professional brewers and the addition of the High Desert Homebrewers Anonymous Club. A total of seven craft breweries were in attendance, including: Big Bear Mountain Brewery, Hangar 24 Brewery, Inland Empire Brewery, Stone Brewing, Green Flash Brewing, Dale Brothers Brewery and Firestone Walker Brewing. Each of these craft brewers brought anywhere from two to four beers to sample, and the High Desert Homebrewers had eight home brews, including Vanilla Bean Porter, Jackson Brown Ale, and Butterscotch Caramel Stout. The local Mountain Brew Club had a total of 23 beers on tap. With out six pour spouts in their booth, they had to rotate the kegs around every hour so guests could have an opportunity to try all 23. I was able to sample eleven on the home brews on tap. I tend to like smoother less "hoppy" beers, and found many of the samples (particularly the craft brewers beers) to be heavy on hops, and very bitter. It appears from conversations with those tasting, bitter is in. For me, my favorites were: Drunk Monk Belgian Blonde, German Girl Oktoberfest, American Amber Ale, Mountain Pilsner, and Cherry Stout. 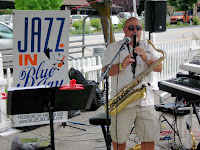 There were a lot of IPA (Indian Pale Ale) style beers, that were so bitter and hoppy, I actually poured a couple out (just not my style). Stone Brewery had one called "Saison de Buff". I heard great comments about this beer. It was bitter, and infused with parsley, sage, rosemary and thyme...sorry, just not what I look for in my beer. As as a wine guy, I savour the aromas and aftertaste. Bitterness is typically not something I enjoy in wine either. 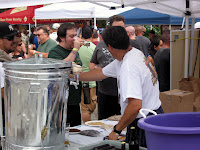 There was also a VIP tasting tent. Anyone who brought in canned food (or made a donation) for Operation Provider (the local foodbank) had their wrist bands punched, allowing them to taste one of four specialty beverages: Hard Cider, Blackberry Mead, Happy Sailor Ale, or a Bourbon Stout.

While sampling the numerous beers available, I ran into Jason Torres, from www.BierBuzz.com. If you are looking for write ups, and reviews of beers, I'd suggest you check out his site. Really nice guy, and he had an entire crew with him (you couldn't miss them in their matching Bier Buzz shirts). 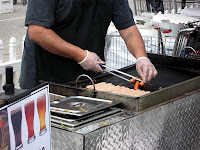 At the end of the day, I was able to sample 25 of the approximately 52 beers available for tasting. Luckily I cut the pours short, as each vendor wanted to fill my glass at least half way. Some were poured out, and others sipped slowly, savoring each taste. It was a mix of good and bitter/sour for me. At 6:00pm, announcments were made for the winners of the homebrewers. 3rd Place went to HoneyDo Agave Wheat, by Jim Beyers; 2nd place went to Drunk Monk Belgian Blonde, by Steve Keefe, and the homebrew winner was Butterscotch Caramel Stout by Robert Regalado (in what I understand was only his third batch of beer ever made). The publics choice for craft brewer of the day was Green Flash Brewing.
Posted by The Sommelier: