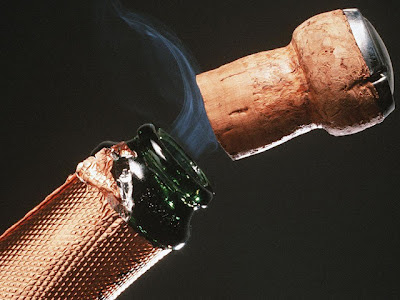 There have been extensive books written on the history of sparkling wine, particularly the most famous of them all: Champagne. This article is not meant to be an in depth investigation of the processes involved, but a more simplified explanation to help you understand what you are getting for your money.

First, let's clear up the difference between Champagne, and other sparkling wine. Champagne can only be produced in the Champagne region of France. It is a regionally protected name. It can only be produced one way, and can only use three traditional grapes: Chardonnay, Pinot Noir, and Pinot Meunier. (There are four other grape varieties that are permitted, mostly for historical reasons, but they are rarely used).  Sparkling wines outside of the Champagne region go by many other names, but none of them are Champagne

Let's start with the Traditional Method. Once you understand all the steps involved in making this style of sparkling wine, you'll understand why you pay more for it. First, the grapes are gently pressed to avoid any color extraction from the skins. Next the juice is fermented (usually in stainless steel) to dryness. The resulting wine is pretty acidic, and wouldn't make a great tasting wine. Next, the different wines are blended to create the "house style". This step is known as "Assemblage". As a side note, this is really what Dom Perignon is known for. (He is not the creator of Sparkling wine. But, the blind monk had a great nose, and was a master at blending wines.)....Back to our steps...after creating the desired blend, the wine is put into bottle, and a combination of wine, yeast, and sugar (known as "liqueur de tirage") is added, and the bottle is capped with a crown cap (just like those found on beer bottles). The addition of this "liqeuer de tirage" triggers a second fermentation inside the bottle. Since it is in an enclosed container, there is nowhere for the carbon dioxide gas to escape, so it is reabsorbed (or trapped) in the wine. Once this second fermentation is complete, the dead yeast cells (known as "lees") must be removed from the bottle. The process of removing this sediment is known as Remuage (or Riddling). The bottles are gradually shaken and tilted over time to get all the sediment into the neck of the bottle. This was traditionally done by hand (and developed by that famous widow Veuve Clicquot...or at least her workers), but now there are machines that can do the job. Once the sediment is in the neck of the bottle. The neck is dipped into an ice bath to solidify the sediment, then the crown cap is removed, and the pressure inside the bottle ejects the sediment plug, leaving a clear wine inside. This process is known as "disgorgement". The bottle is then topped off with a final dosage known as "liqeuer d' expedition" (a mixture of wine and sugar that will determine the final sweetness level of the finished product), then corked, caged, and labeled.

The second way to produce a sparkling wine is the transfer method. All the steps are the same as traditional method, up to remuage. Instead of this time consuming (and expensive) process, the wine is emptied from the bottle (or transferred) to a pressurized tank, where the wine is separated from the sediment in bulk. The dosage is added, in bulk, and then bottled under pressure. The final result is fairly indistinguishable (much to the chagrin of the French) from the traditional method.

In the Charmat (or tank) Method, both the first and second fermentation are done in a pressurized tank. This process is fast, cheap, and not very labor intensive. The resulting bubbles are less refined, and the flavor from the sitting on the lees is less apparent.  Probably some of the best known wines in this style are Prosecco, Asti and Moscato d'Asti from Italy, and Sekt from Germany.

The last method is the cheapest method, and that is through direct injection of the carbon dioxide into the wine, just as you would add carbonation to a soda. The resulting wine produces large bubbles that dissipate quickly.

Some tips on understanding the labels: 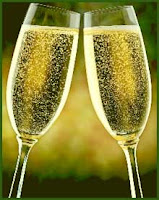 Most Sparkling wines are non-vintage, meaning they are blend of years, but probably mostly from the current harvest. Reserve wines from previous years are kept at low temperatures, and added to the current harvest to maintain a consistent house blend flavor profile. Vintage Champagne is only declared in the best years, and require at least 3 years of aging.

For tips on serving your Sparkling wine, check out my earlier blog here.

So what are some of your favorite sparkling wines?
Posted by The Sommelier: