On Friday, we did wine tasting in Lodi, and Saturday we were in Calaveras County. Sunday is the day that everyone is on their own during our wine tasting treks. Many had to be back at work on Monday morning, so they headed out on the road for the 7 hour drive back to Southern California. We, on the other hand, headed northeast to Amador County, to do some tasting in the Shenandoah Valley. 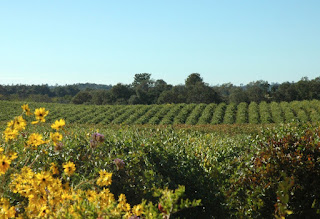 Officially, the name of the AVA is California Shenandoah Valley.  The AVA was established in 1983, and it includes portions of Amador county and El Dorado county. This is California gold rush country, but now probably better known as Zinfandel and Barbera country. The Shenadoah Valley is the lowest elevation region, in the Sierra Foothills AVA, and is also the westernmost. There are over 40 wineries in the Shenandoah Valley.

From Lodi, the drive to Amador only took about 45 minutes. We wound our way through rolling hills covered with oak trees. As we approached the town of Plymouth, we saw signs of new housing sub-divisions, touting wine country living. We turned off of Hwy 49 and made our way onto Shenandoah Road. The country road winds through the foothills, and wineries are easily accessible on both sides of the road. These wineries are generally smaller than what we encountered in Lodi and even in Calaveras County, if you judge them by their parking area. Most of the tasting rooms were smaller, and any thought of bringing a large group in for a tasting would be a challenge. Matter of fact, a couple of the wineries had signs saying, “No buses or limousines”.

At the recommendation of friends, the first stop (and the first winery you come to on Shenandoah Rd) was Young’s Vineyard. As you approach the tasting room, you can’t help but wander the garden area interspersed with lawn chairs and picnic tables. The tasting room is small, but we were the only four people in the room. We were greeted and went through a lineup of wines. As another small group came in, our pourer moved over to them, and we continued our tasting with the owner. She never introduced herself, but she had a European accent, and we were told (later) that she was the owner. The wines are mostly reds. We did have a Riesling and a Rose, but this is red country.  They produce about 3,000 cases. The wines are full bodied, fruit forward wines. All have interesting, artsy labels. We purchased the 2014 Barbera and the 2014 Reserve Cabernet (which needs to age another 4 to 5 years).

As I typically do, I had asked the owner what winery we should go to next, and she suggested Jeff Runquist Wines, just up the road. This winery has a larger parking area, and it was a good thing, as they have a club member event going on that day. The tasting room was packed. The winery produces 22 different red varieties from 9 different AVAs. They do not grow their own grapes, so don’t expect to see their vineyards. No white wines here… Zinfandel, Barbera, Syrah and Petit Sirah are the main focus, but we also found Sangiovese and Petit Verdot. All the wines are fruit forward, and rich. We purchased the 2014 Cooper Vineyard Barbera and2014 Esola Vineyard Zinfandel. More on the Cooper Vineyard below.

Another recommendation was C.G.Di Arie Vineyard and Winery. We backtracked a bit and pulled into the small parking lot. Once again, we were the only people in the tasting room. Our pourer gave us the entire history of the winery, and the winemaker. The back stories are always the fun thing about tasting at a small winery. This one was really interesting. Chaim Gur-Arieh made his money as a food product developer. His claims to fame are Cap’n Crunch cereal, Hidden Valley Ranch dressing, and Power Bars. I can’t tell you how many different wines we tasted here. It had to be at least 15. Many weren’t on the tasting list, but happened to be open and sitting in the tasting room cooler. This was one of our “finds” of the weekend. They had a number of special discounts available, and they were not just for wine club members. We took advantage of the ½ priced 2007 Zinfandel, and split a case with our friends, as well as the 2007 Petit Verdot. At a local wine tasting event, back home, I brought a bottle of the Zinfandel for the tasting, and it was picked as the best wine of the evening. Stop at this winery if you are in the area.

By this time, we were getting hungry, so we stopped at VillaToscano Winery. Our friends are wine club members there, so we stopped to pick up there club shipment. The lunch choices were tasty, and the outdoor picnic area is very nice. This is one of the largest wineries in the area, with a large tasting room, and extensive gift shop. The grounds and building do look like something out of Tuscany.

The next recommended winery was Cooper Vineyards. I mentioned their vineyard above, as one of the suppliers for Barbera. We parked along the dirt circular drive, overlooking vast vineyards on all sides. We happened to pick the tasting bar where Dick Coopers daughter, Jeri, was pouring. We soon learned that Dick Cooper was known as the “Godfather of Barbera”. The family has been farming in the area since 1919. Most of the wines are dry reds, but don’t miss the two dessert wines they offer too. All the wines are outstanding, and this was our second “find” of the weekend. If you like Barbera, then you have to stop here. We purchased the 2013 Barbera, 2013 Sangiovese, and the 2014 Grenache. All estate grown, and all very well priced.

We left Shenandoah Valley and drove to the old gold rush town of Sutters Creek. This was like a step back in time. I had received a message on Facebook, from a winery who follows the Sommelier Update page. One of the owner’s sons saw that I was going to be in the area, and suggested I stop by, so I did. Bella Grace Winery is a family owned winery with a tasting room located in a building from the 1860’s. They offer a mix of sparkling, whites, rose, and reds. They also have a quaint gift shop with olive oils, vinegar and animal wine pour spouts. We purchased the 2012 Barbera and 2013 Old Vine Zin.

As our weekend was coming to an end, we drove back to Lodi, and then headed out for our final dinner in the refurbished downtown area of Lodi. I small group of us met at Rosewood Bar & Grill, and shared our different tastings throughout the area (some stayed in Lodi and explored the local wineries there).

The next morning we had breakfast at the Omelet House, then hit the road back to Southern California. I said it in one of my previous blogs about this trip….don’t discount Lodi, or the Sierra Foothills. While they don’t get the press that Napa, Sonoma or Paso Robles get, this is a legitimate wine tasting region!
Posted by The Sommelier: