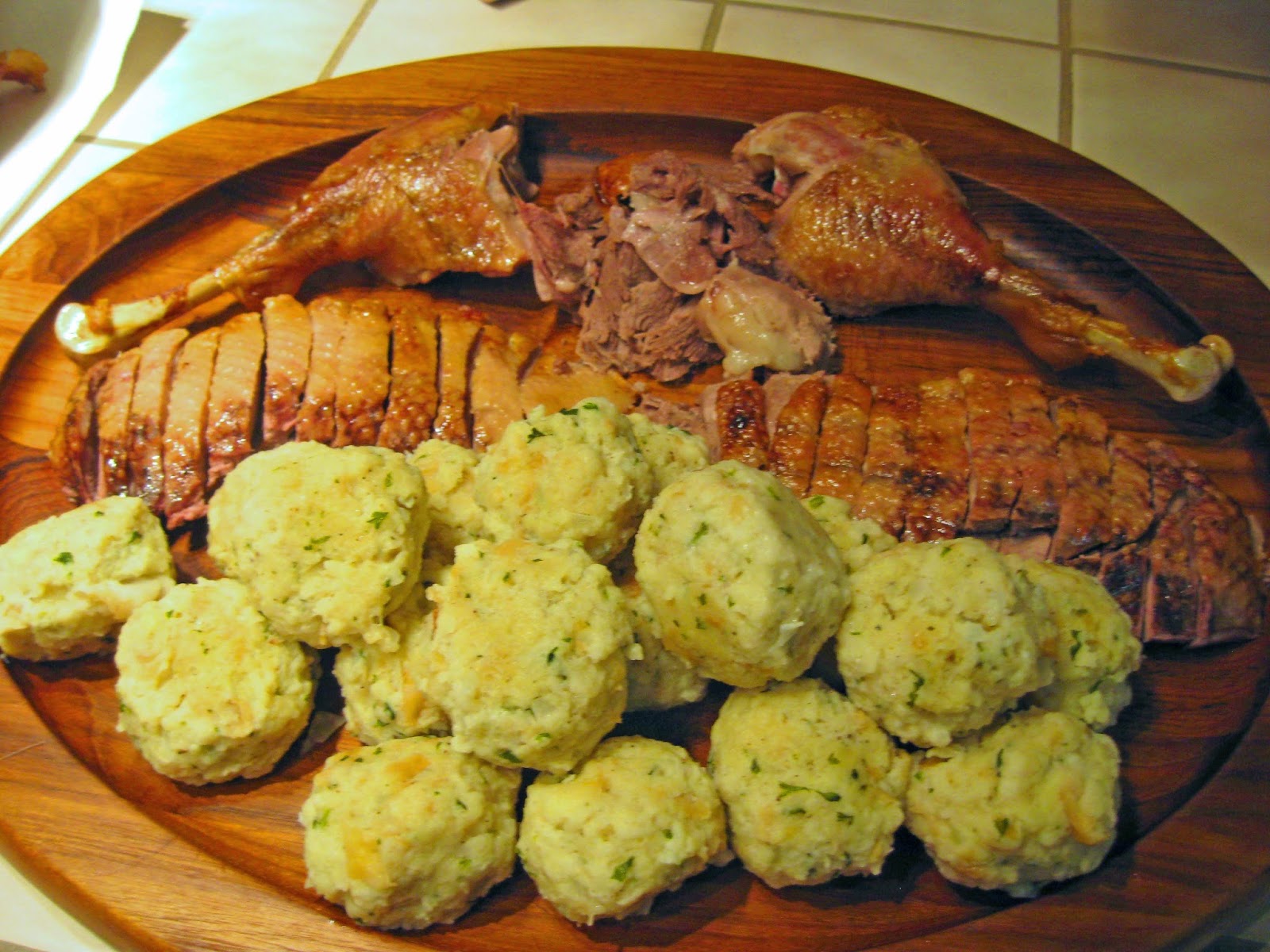 It has been a few months, but our small gourmet dinner group finally got together for another wine pairing dinner. This time it was my turn to host, meaning I need to come up with the theme, and create the 5-course meal. As the Sommelier in the group, I always have the duty of determining the wine pairing for each course. 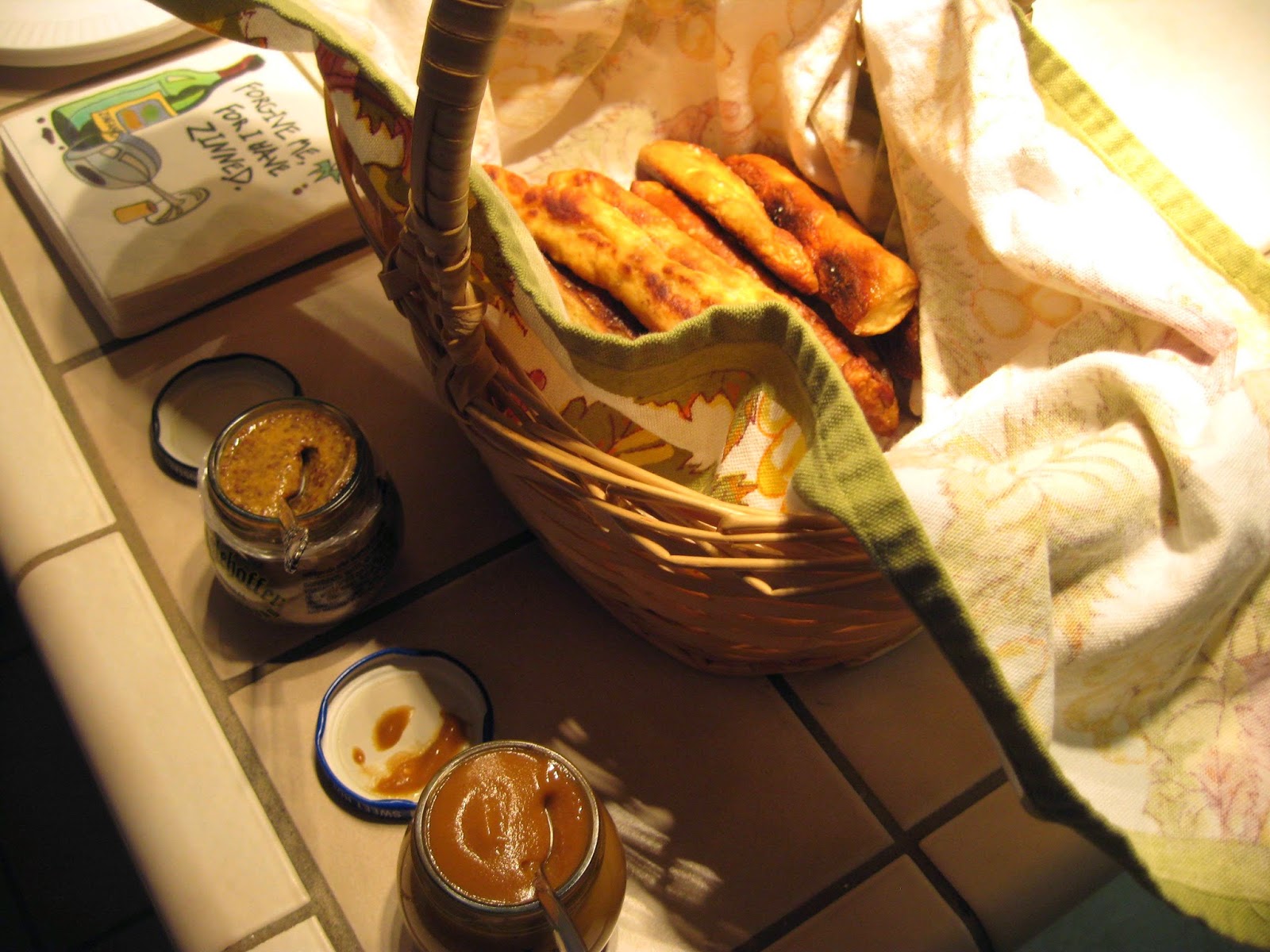 If you are a regular reader of this blog, you know the process...all the recipes are researched and made with authentic ingredients (even if we have to import them) and made in the traditional style. In the past we have done Sicily, Spain, Tuscany, Nicaragua, Chile, Norway, Burgundy, to name a few. This night we gathered for a full German Dinner, paired with German wine and beer.

We decided that rather than focus on a specific region within Germany, that we would create a meal that represented Germany as a whole, and with items we could have some fun with. I have always wanted to try cooking a Christmas goose, so the menu was developed around that idea. What follows is a recap of each course, and the wine that was paired. 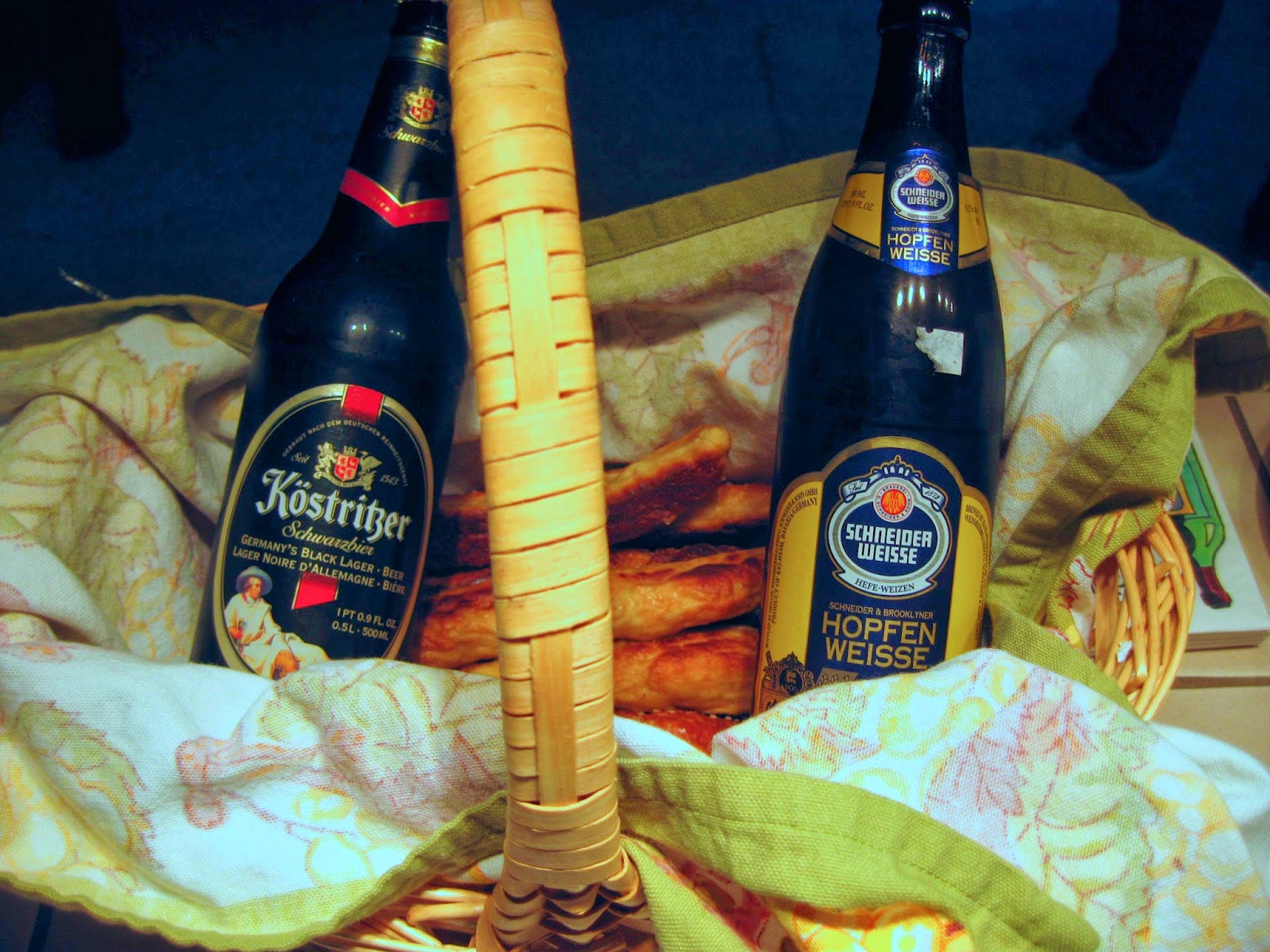 The goal of our small group is not only to have a great dinner, paired with the perfect wine, but to also learn new cooking techniques. Our first course was the perfect example. While a soft pretzel with mustard may not be a "glamorous" opening course, it was fun and tasty. My friends, Jeff & Lisa took this as their course, and described the process of making a pretzel, plus the challenges of getting the twist...which they gave up on, and created straight pretzels (which worked better for dipping in mustard anyway). I paired this opening course with German Beer. Originally, I had only purchased a lighter Hopfen Weisse (Wheat Beer), but added a Black Lager at the last minute. I found that the original choice of the Hopfen Weisse paired best with this course, enhancing the yeastiness of the pretzels and allowing the German mustard to come through. 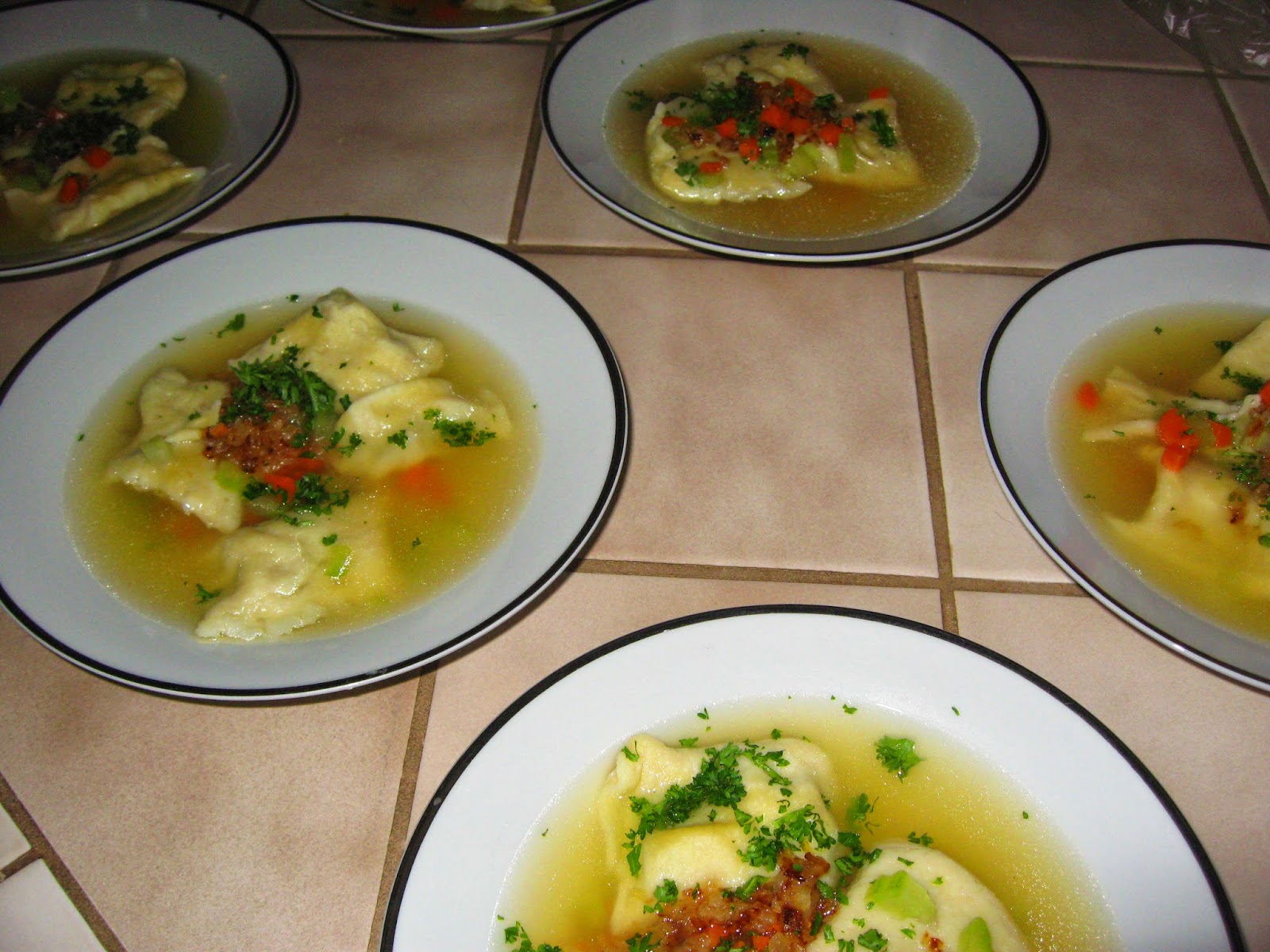 For our first "sit down" course, we had a dumpling soup, made by Bruce & Kathleen. The dish is known as Maultaschensuppe in Germany, and is basically a chicken broth, with homemade meat-stuffed dumplings. The dumplings are more like a ravioli, but made in a slightly different assembly process. For this course, I paired a German Rose of Pinot Noir: 2012 Meyer Nakel Rose from the Ahr region.

By this time, the goose I was cooking was not quite done, so we had a bit of a break. I opened a bottle of German Pinot Noir, to sip, as we waited. Due to the cool climate, German Pinot Noirs are very light, with fairly high acidity. 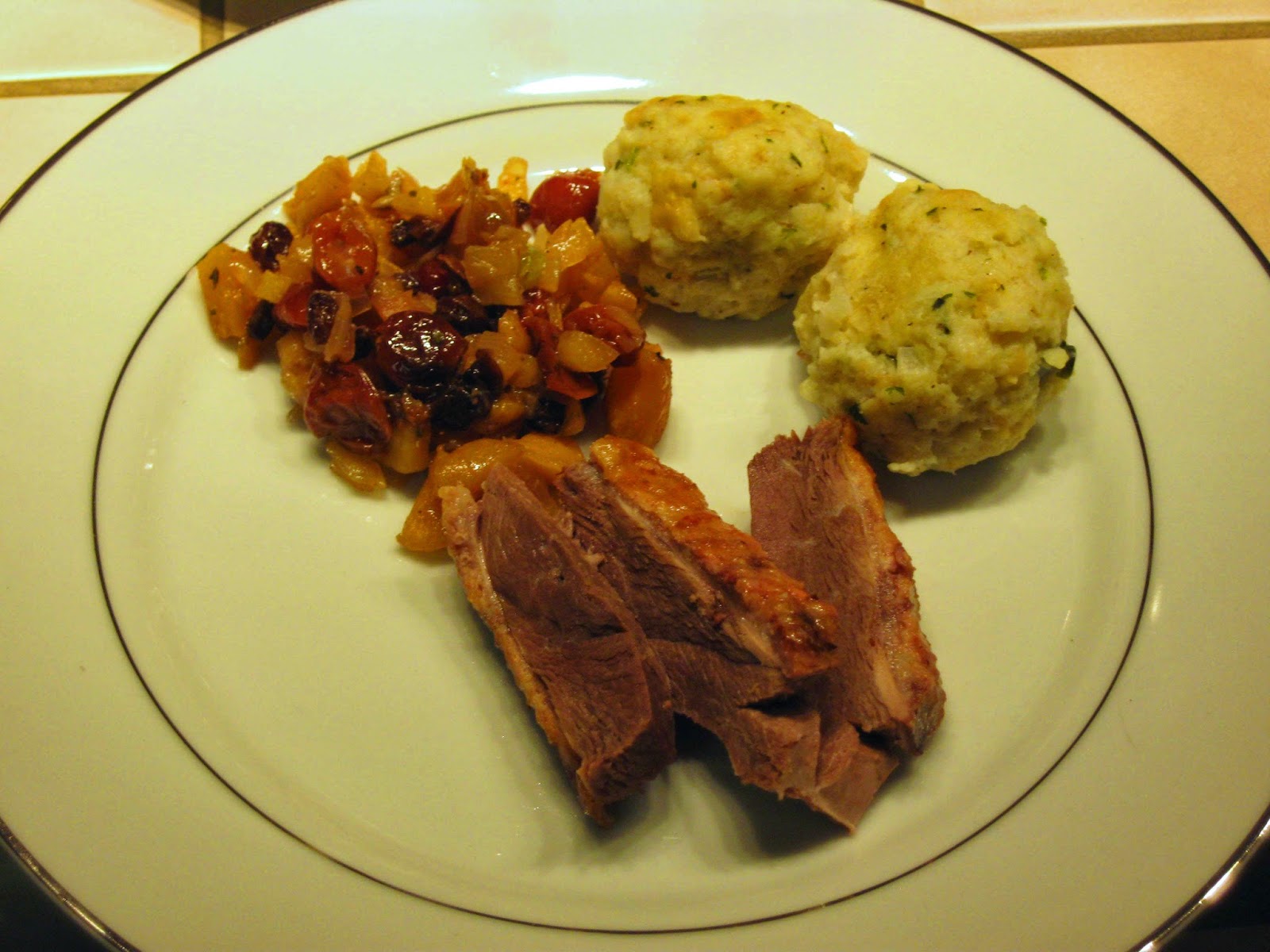 The main course was a 12 pound roasted goose, stuffed with brandied fruit. I served this along with homemade bread dumplings. If you have never tried cooking a goose, let me give you a hint...cook it like a duck, and not chicken or turkey. It is dark meat, very fatty and rich. It can be served medium to medium rare. My recipe said to cook to 180 degrees, but I took it out at 161. Next time, I would take it out at 140, as I felt it was a bit overcooked. It wasn't dry, but I think it lost something with the extra time. The brandied fruit stuffing was very good, as were the dumplings. I went straight for the traditional goose pairing: Riesling. I wanted something with some fruit, but a bit of age. I chose the Dr. Hermann 2006 Spatlese "Herzley" from Mosel. Now, before you question going from beer to rose to red, then to a white, let me explain...this is a full bodied white, and came across much heavier than the pinot noir. The slight sweetness and fruit flavors paired beautifully with the rich goose, and fruit stuffing. This is a classic that everyone needs to try at least once in their life. 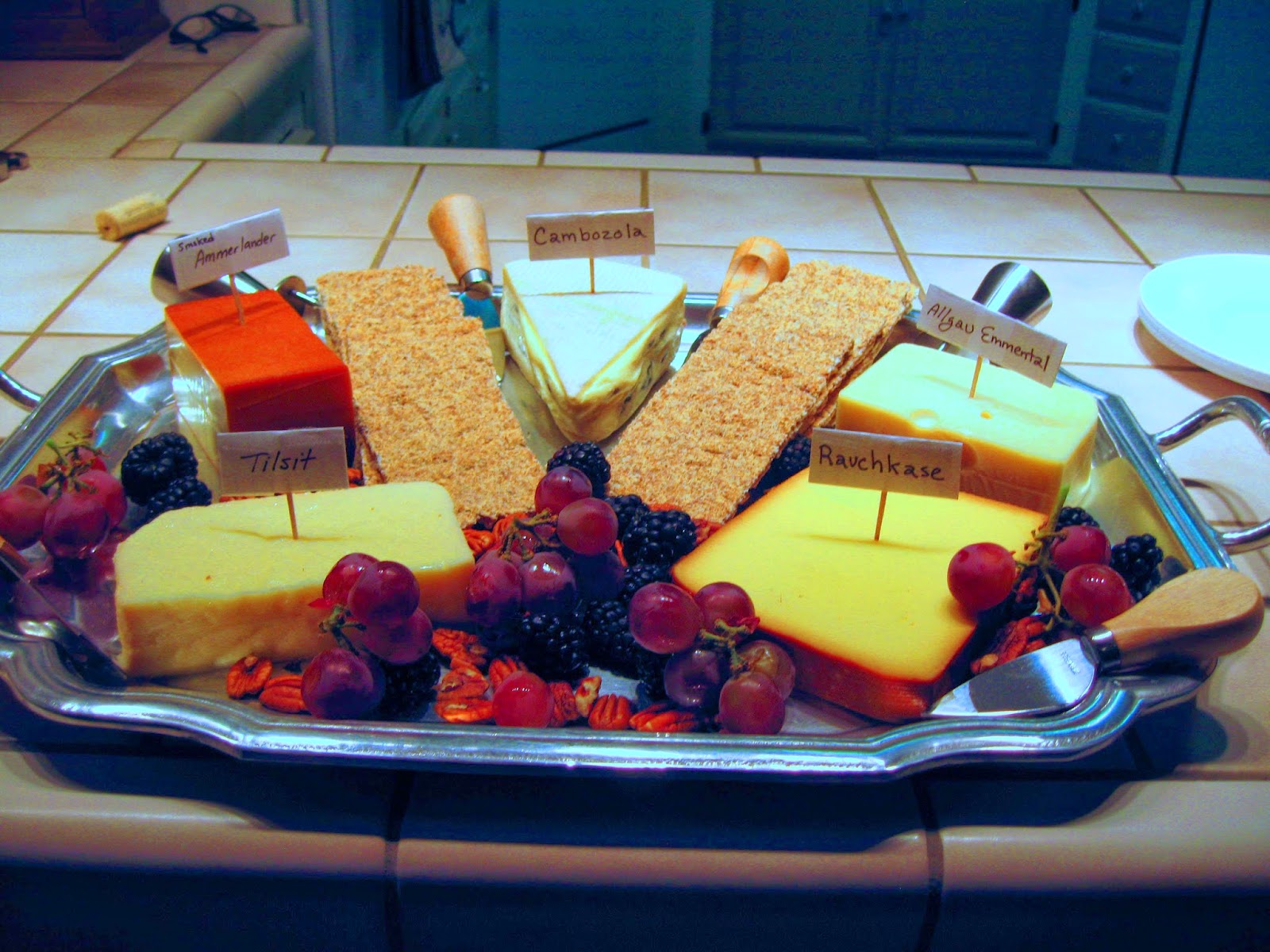 Following the European tradition, the fourth course was a cheese course. I had purchased five German cheeses from igourmet.com. All were cows milk cheeses, and two were smoked. They were: Allgau Emental, Smoked Ammerlander, Cambazola, Rauchkase, and German Tilsit. Also on the cheese plate were blackberries, grapes, pecans and dark rye toasts. We paired this with a dark, fruity 2012 Dornfelder from Gerd Ansleman. This was a nice pairing, except for one cheese. The extremely strong and pungent Tilsit was overpowering, and I would leave that cheese out next time. 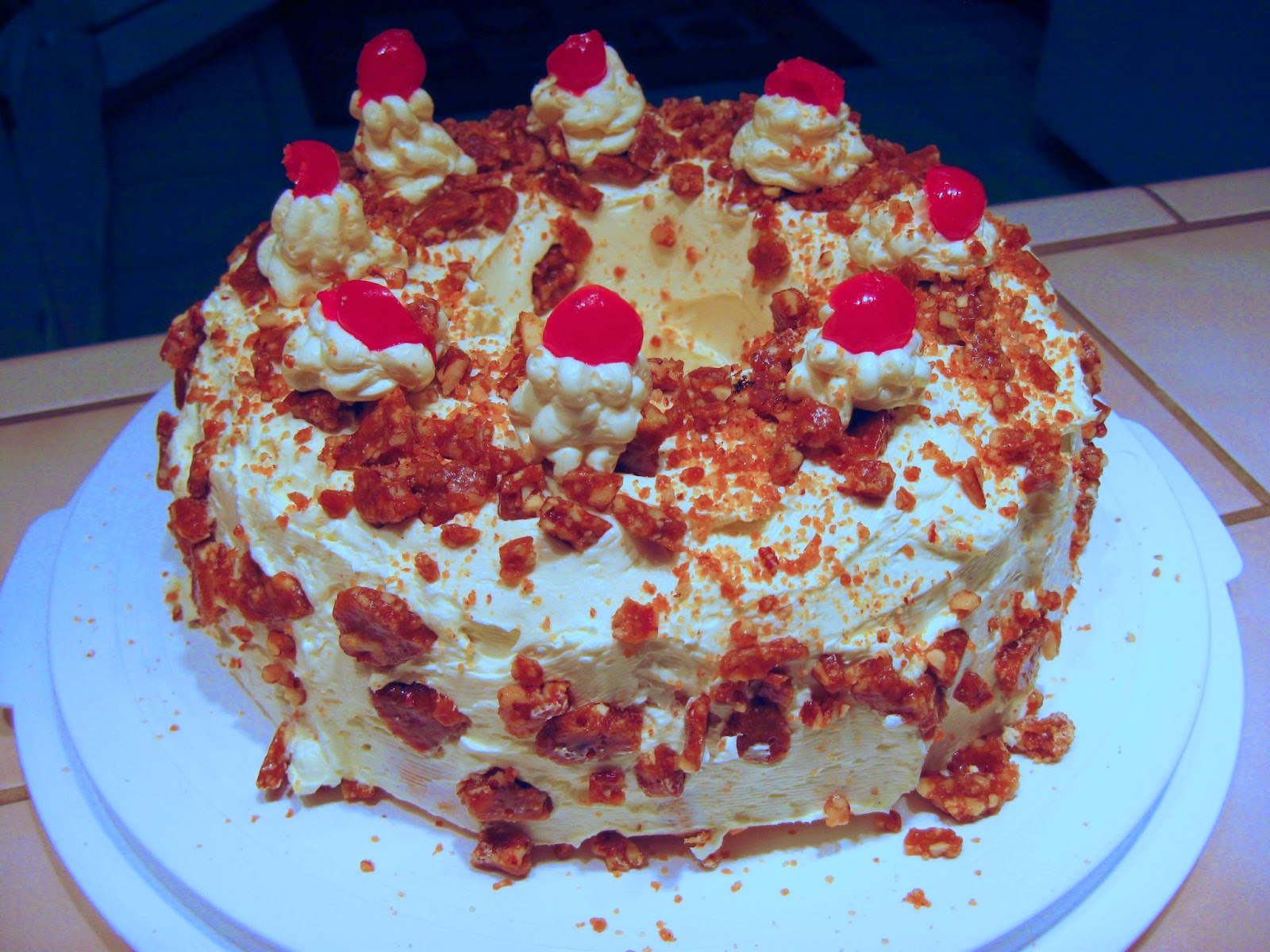 We ended the evening with  a dessert course of Frankfurter Kranz. My friends, Lauren and Mark created this dessert. It is a "crown cake" with layers of white cake and jam. The smooth, sweet frosting is covered with cherries and candied pecans. I paired this with a wonderful German sweet Riesling cross: 2005 Pfeffingen Beerenauslese Herrenberg Scheurebe. This worked great with the sweetness of the cake. We also ended the evening with Pharisaeer, and strong coffee, mixed with a sugar cube, Jamaican dark rum, and topped with whipped cream. Delicious! 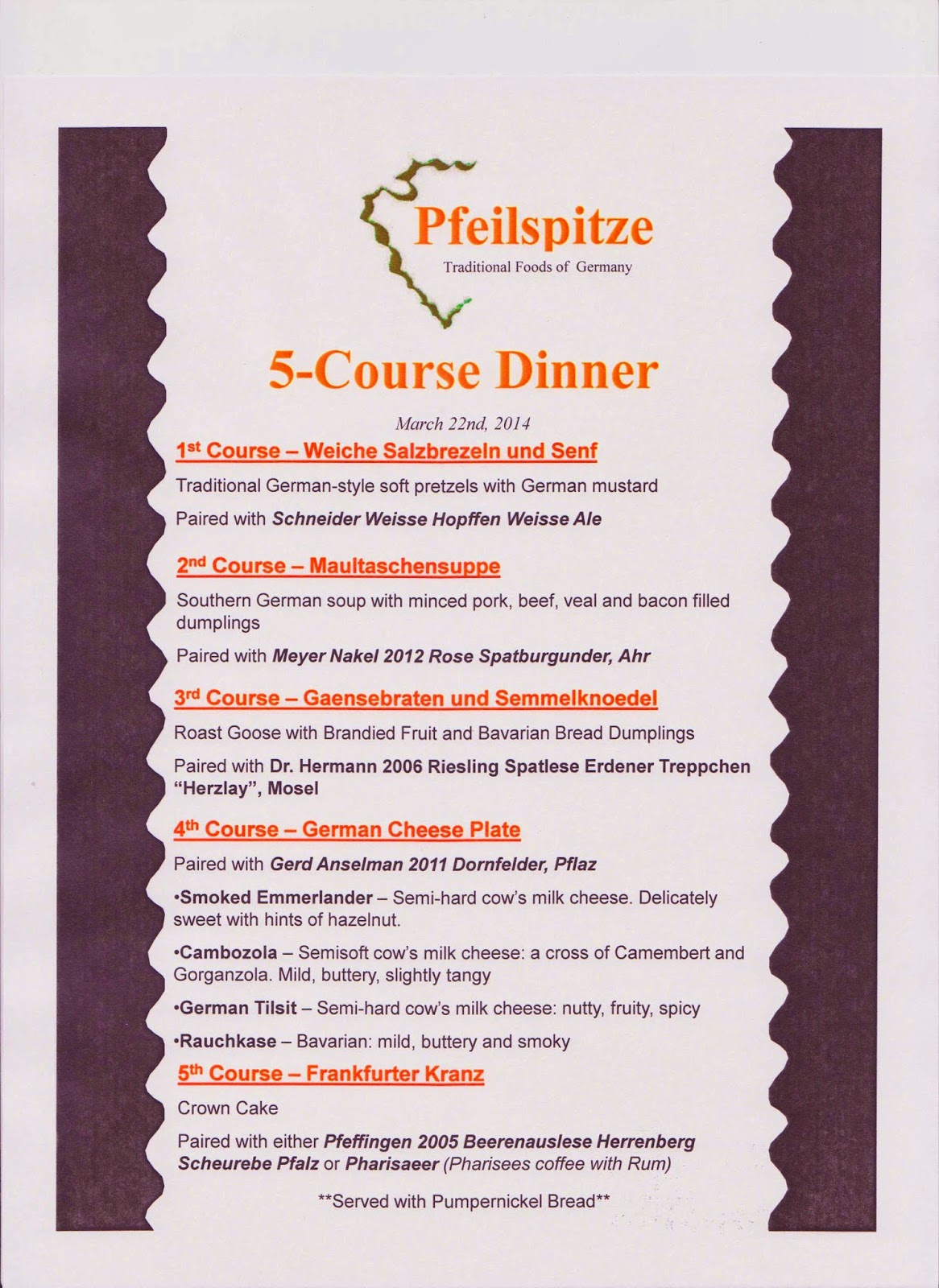 I hope this simple recap of our German wine pairing dinner will inspire you to try one on your own. Either copy our menu, or create your own. Have fun with it. If you can't afford to go to Germany, dress up the table, buy a couple Oktoberfest music CD's and make an evening of it...just like we did!
Posted by The Sommelier: