You can tell the holiday season is upon us, just by the amount of Christmas commercials on television, as well as the re-runs of old Christmas shows. This week, I watched an interesting show on the History Channel about where our holiday traditions came from, and it got me thinking about traditional holiday drinks. Last year, I did a blog about mulled wine, and the previous year, I did one about the origins of eggnog. So this year, I went into the archives, and did some digging. Are you familiar with Sack Posset?

“Sack what?” you say? Sack Posset was a popular, custard-like drink of Elizabethan England. That may be the nice way of putting it. Since many in the population of that time, were of lesser means, Sack Posset was more of a curdled milk and wine/beer concoction. It went out of style about 200 years ago, but a newer recipe I was able to find, may revive this once popular drink. 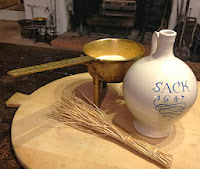 First, where did the name come from? “Sack” is a common old English term used to refer to a fortified wine. It may have come from the Latin, ‘siccus’ meaning dry or harsh. But, not all fortified wines are dry and harsh. You may be familiar with Dry Sack Sherry (which can be harsh). This is a dry, fortified wine from the Sherry (Jerez) region of Spain. Since “sack” can refer to any fortified wine, we can assume Sherry, Madiera, or even Port could be used as an ingredient. The word, “posset” used to refer to a small pot or saucepan. Today, a posset is a type of small pot. They have large bodies, lids and usually, two handles. There is a spout at the front that was not used for pouring, but for actually sucking out the liquor. The remaining curds were eaten with a spoon. 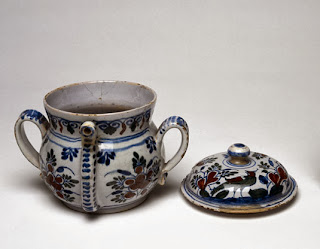 Sack Posset was made from various recipes. Originally, it appears to have been for medicinal use. But by the 17th Century, it became more popular as an actual beverage. Also, remember that hygiene, pasteurization, etc, were not known at this time, so alcohol was the way to kill germs. Sack Posset typically featured spiced, warm wine mixed with milk, or cream. The milk would curdle and float to the top. So you would drink the wine from the bottom, then eat the sweet curds that floated to the top.
A properly made posset was said to have “three different layers. The uppermost, known as 'the grace' was a snowy foam or aereated crust. In the middle was a smooth spicy custard and at the bottom a pungent alcoholic liquid. The grace and the custard were enthusiastically consumed as 'spoonmeat' and the sack-rich liquid below drunk through the 'pipe' or spout of the posset pot.”

The first published recipe is from Sir Kenelm Digby (London: 1671):

Take a pottle of Cream, and boil in it a little whole Cinnamon, and three or four flakes of Mace. To this proportion of Cream put in eighteen yolks of eggs, and eight of the whites; a pint of Sack; beat your eggs very well, and then mingle them with your Sack. Put in three quarters of a pound of Sugar into the Wine and Eggs, with a Nutmeg grated, and a little beaten Cinnamon; set the Bason on the fire with the Wine and Eggs, and let it be hot. Then put in the Cream boiling from the fire, pour it on high, but stir it not; cover it with a dish, and when it is settlede, strew on the top a little fine Sugar mingled with three grains of Ambergreece, and one grain of Musk, and serve it up. 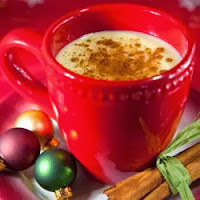 I was able to find an updated/current recipe for Sack Posset, that was published by Reader’s Digest (Australia), it is written as follows:

Reserving 1 teaspoon of the caster sugar, heat the remainder with the cream in a saucepan until it rises to the boil. Pour the cream mixture immediately, in a steady stream from a height, onto the egg mixture, whisking as you pour to make it frothy.

Leave the posset to stand in a warm place for 5 minutes, then sprinkle the reserved sugar and a little nutmeg over the surface and serve in heatproof glasses. This drink goes well with mince pies and, because it is rich, one glass per person should be sufficient.

So, try something different this holiday. Make some mulled wine, or homemade eggnog….or if you are really adventurous, make some Sack Posset, and share the history with your friends.
Posted by The Sommelier: