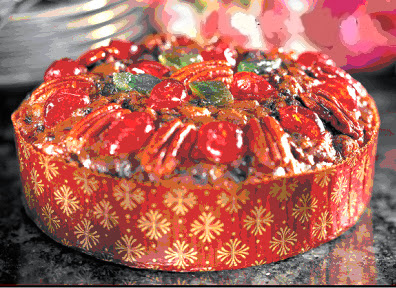 Naughty or nice? That is a question that is fairly common this time of year. But when it comes to fruitcake, maybe the question should be, “nasty or great”. You either love it, or hate it. I happen to like a good fruitcake. The challenge is that most aren’t that good. So what is it with fruitcake?

I can’t shed any new light on the history of fruitcake, but can recap what many other sources have already stated….It may date (pun intended) back to the early Egyptians, who placed fruitcake on the tombs of loved ones, possibly as food for the afterlife. But it really wasn’t that common until the time of the Romans, when “pomegranate seeds, pine nuts and barley mash were mixed together to form a ring-shaped dessert”. In the Middle Ages, preserved fruit, spices and honey were mixed in were popular with the crusaders.

It was the English, however, who started the Christmas tradition. It was originally known as “plum porridge”, and it was eaten on Christmas Eve, as a mixture of oats and plums. Soon, dried fruits, honey and spices were added and it was called “Christmas pudding”. Eventually, as the oats were removed, and replaced with cake, the name changed to "Christmas Cake", because the spices reminded people of the story about the Wise Men bringing exotic spices to the Christ child. 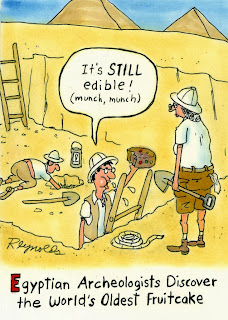 Around this same time, people realized that fruit could be preserved, when soaked in large concentrations of sugar (the result of cheap sugar arriving in Europe from the New World). Not only the local fruits, but imported exotic fruits (citrus, pineapples, dates, pears) could now be used.
While sugar makes for a decent preservative, alcohol might be even better. I remember the strong smell of brandy filling the air, when the fruitcake tin was opened. When I started looking for recipes, many did not include alcohol, but those that did, required being made well in advance of Christmas, then “fed” an amount of whiskey, brandy, or rum every few days. Some recipes required that an alcohol soaked cloth be wrapped around the cake. The alcohol would kill any potential bacteria from forming. Also, the earlier the cake is made, the more opportunity for the cake to develop and deepen its’ flavors. Just like wine, preserved fruit also has tannins that are released into the cake, adding complexity. The alcohol also counteracts the sweetness of the candied fruit.

When it comes to alcohol and fermented spirits, Monks are the experts. The best known “monk-made fruitcakes” comes from the Trappist monks at the Abbey of Gethsemani near Louisville, Kentucky. Another is produced by monks at the Holy Cross Abbey in Berryville, Virginia. Their brochure describes the fruitcake as follows, "The Brothers add a generous measure of fine sherry wine. After slow and gentle baking, each cake is laced with traditional brandy and topped with a honey glaze."

I’ve made numerous fruitcakes over the years, some better than others. The best one was found in the Bon Appetit magazine back in the 80’s. For the life of me, I cannot find that recipe. I have searched the internet, as well as my recipe shelf. No luck. This year, I have started making the White House Fruitcake Recipe. The large bowl of fruit is soaking in Tennessee Whiskey and Cognac (yes, as with any cooking, always use the best ingredients). 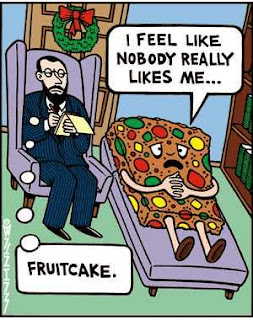 Since this is a wine blog, I would be remiss if I didn’t offer a few wines that might pair well with a fruitcake. The most obvious would be to pair with the type of alcohol that the cake had been soaked in (assuming it was one of those types of cakes). Some other possible pairings would be Moscato (with its’ fruit-forward flavors of grapes, peaches and apricot); Tawny Port (with oxidized flavors of almond, spice and caramel); Sweet Riesling (peach and orange blossom); or maybe even a Rutherglen “stickie” from Australia, or an Italian Bracchetto d’Aqui; and finally, an off-dry sparkling wine.

“Friends are the fruit cake of life - some nutty, some soaked in alcohol, some sweet - but mix them together and they're my friends.”

Merry Christmas!
Posted by The Sommelier: