Dinner in South Africa...or was it? 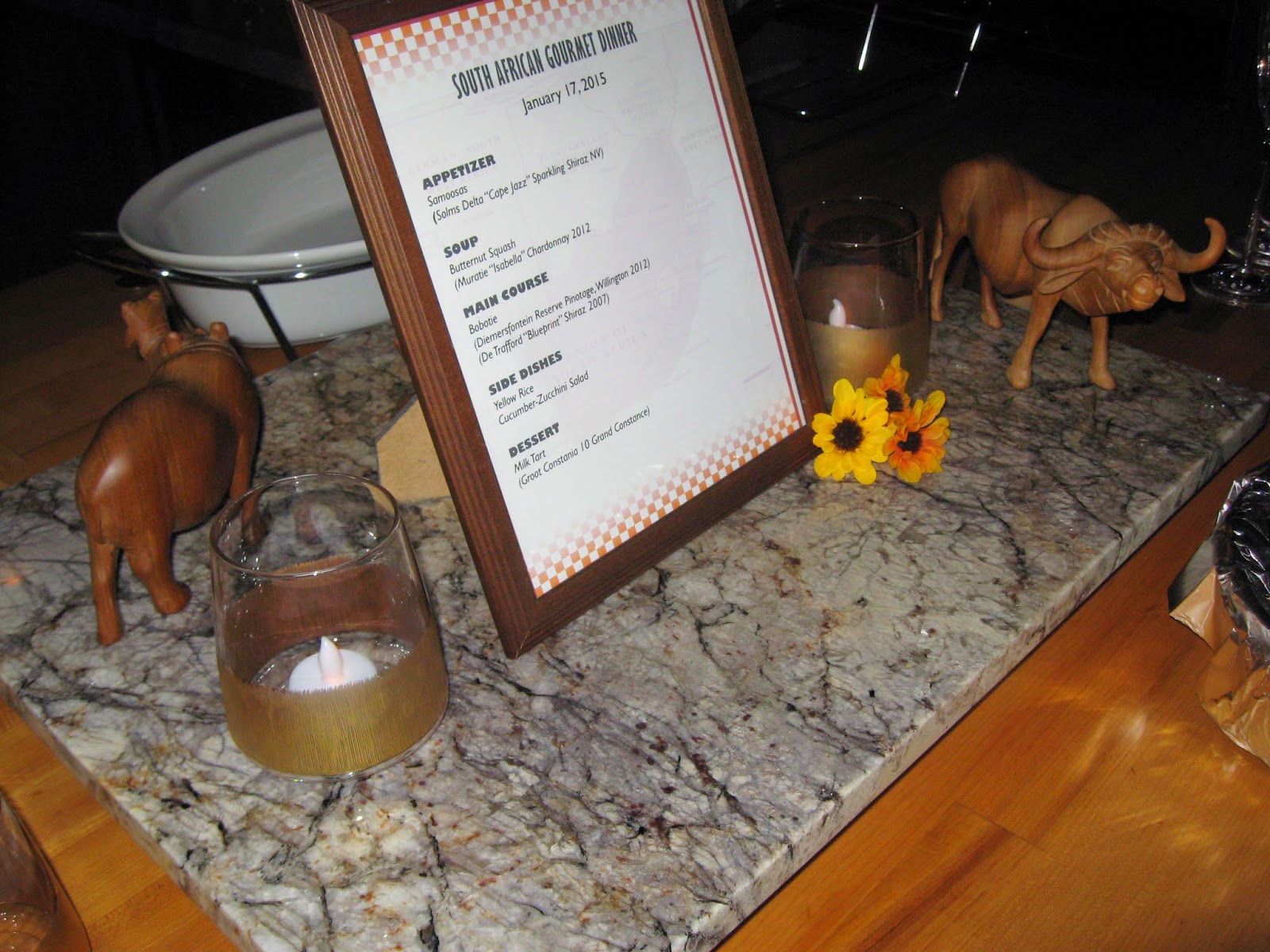 It’s a new year, and what better way to kick it off, than to gather a group of friends, and indulge in the cuisine of South Africa. Followers of this blog know that about every three months, we gather a group together, do some research on a regional cuisine, then create a dinner and wine pairing. 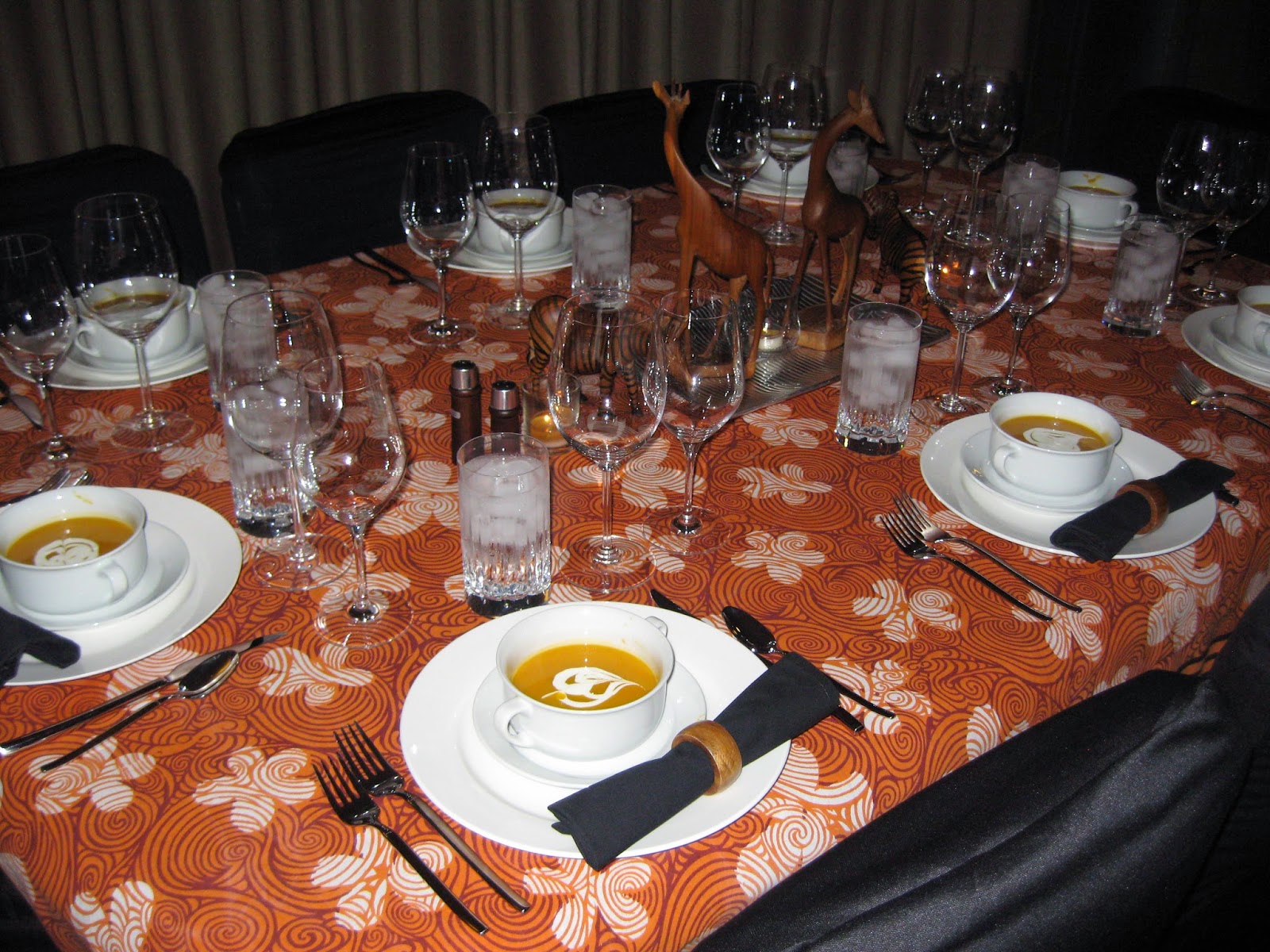 “Cuisine of South Africa” you say? What exactly is that?  To say the least, South Africa has a variety of cultural influences. There are the indigenous people, who would relish a dinner that started with fried caterpillars, and had a main course of crocodile. But, most of the modern cookery emerged through varies waves of colonization from Europe, and the cuisine of their slaves/servants. The Dutch East India Company had a huge influence, as they increased the trade between South Africa, Europe, and India. The slaves came from the east and worked mainly as farmers or fishermen. They brought with them various spices that added flavor to commonly bland Dutch and English dishes. 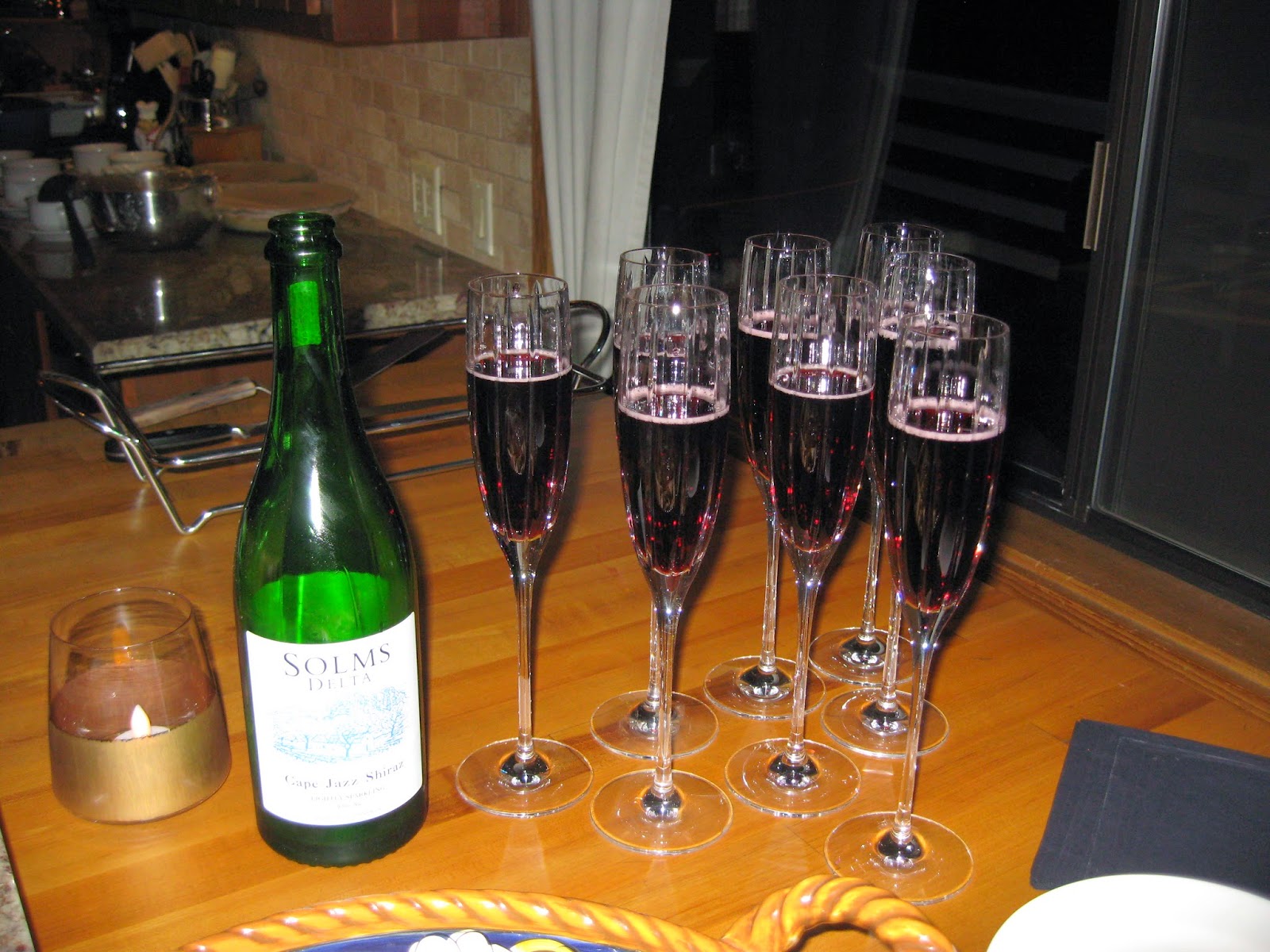 This night, we chose to focus on the cuisine of the Cape Malay people (slave/servant). The foods have many characteristics of Indonesian and Indian cuisine. Many of the foods are crosses of Malay and European cuisine. Curry, raisins, and multiple spice blends found their way into all dishes, with the exception of dessert. The challenge for pairing wine was to determine the dominant flavor profile for each dish, and choose the appropriate wine. And, since the wines had to come from South Africa, the challenge was complicated….there are limited suppliers of South African wine in our area. The only choice was to purchase wines online, and choose based on winemaker profile notes. 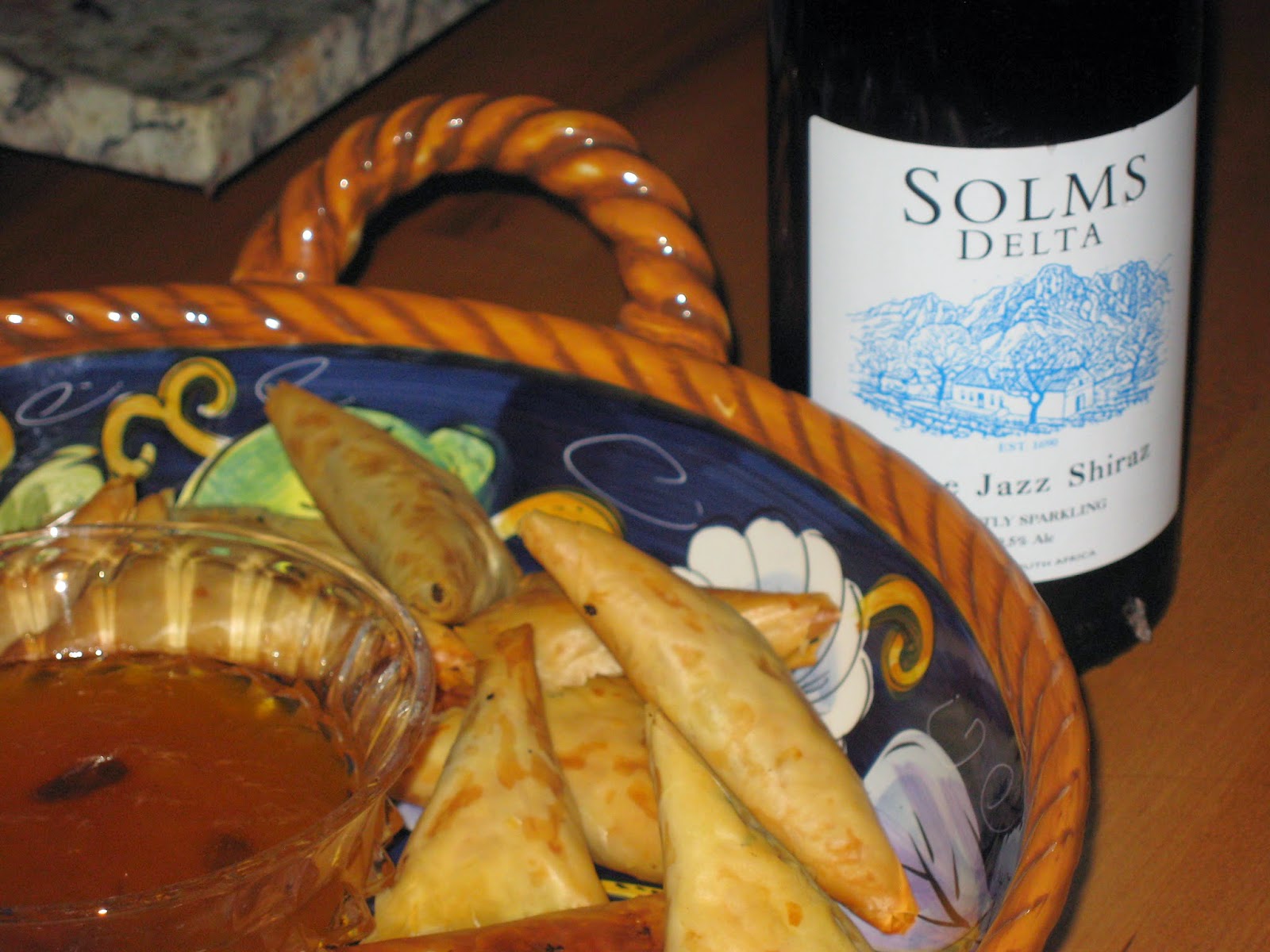 Our first course was a fried dish, known as Samoosas.  These are traditionally an Indian snack of potatoes, meat and peas, wrapped in dough, and fried.  Our version took a little more modern approach, in that we used phyllo dough, and baked the triangle-shaped pouches. There were no less than 14 spices blended with the beef, onion and garlic mixture. We served this with a dollop of Major Grey Chutney. My first pairing thought was a sparkling wine, due to being fried (even though we baked them). I wanted something heavier, to hold up to the beef and spices, and I wanted a slight amount of residual sugar to hold up to the spice, and the sweetness of the chutney. Ultimately, I went with Solms-Delta - 'Cape Jazz' Sparkling Shiraz NV. 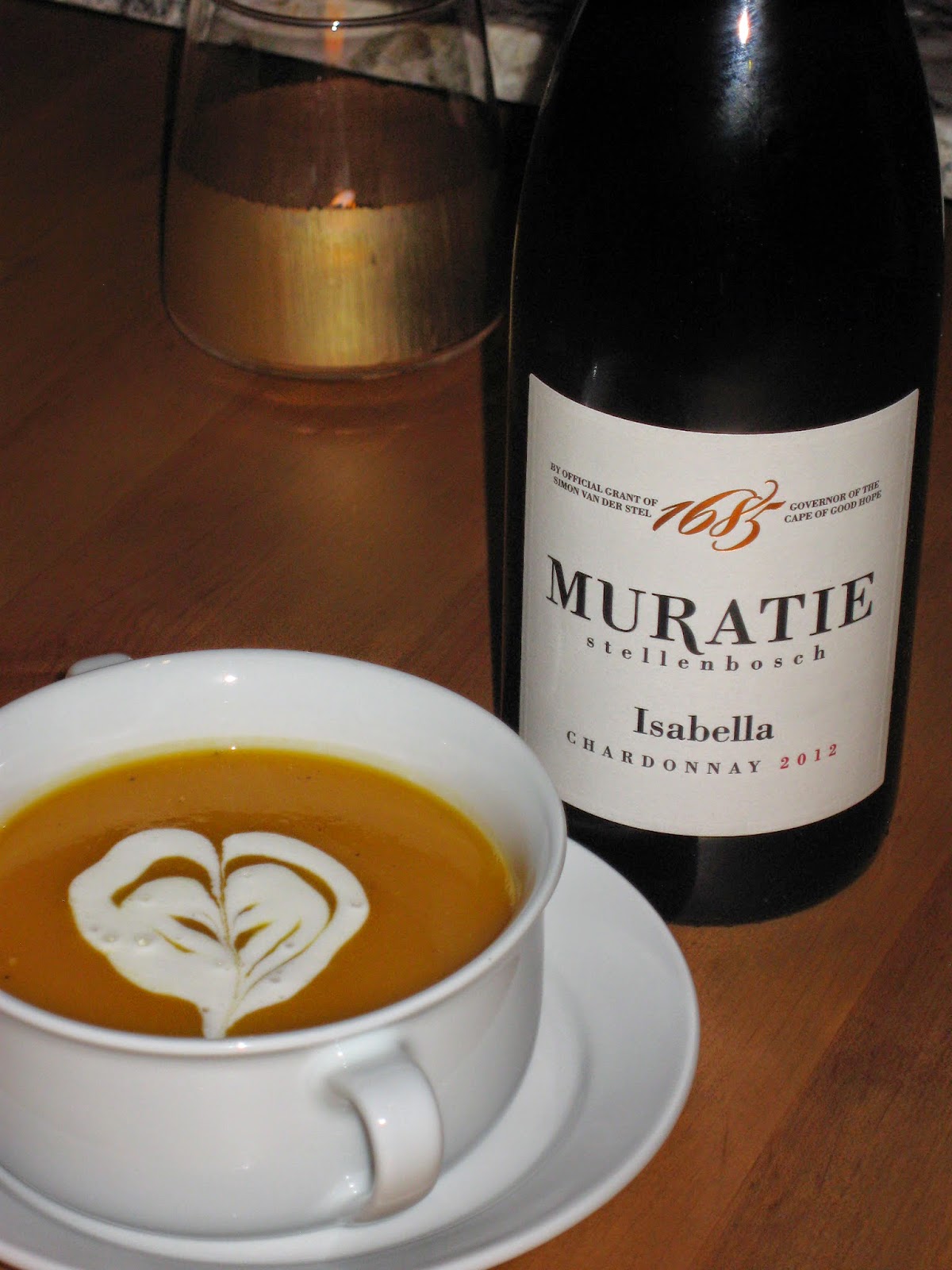 For our second course, and first sit down meal of the evening, we had a South African Butternut soup. This simple soup recipe is highlighted by the sweetness of the butternut squash, the hint of heat from the chili pepper, and the richness of cream (which was artistically added to the top of the soup prior to serving). I could have gone in all types of directions with the wine for this course. Again, the focus was to stay within the region for the wine, which many left Sauvignon Blanc, Chenin Blanc (known as “Steen”) Chardonnay, and Riesling. Due to the body of the dish, and went with something a little heavier, and chose Muratie - Isabella Chardonnay 2012. This Chardonnay had a nice creamy texture that worked nicely with the soup course. 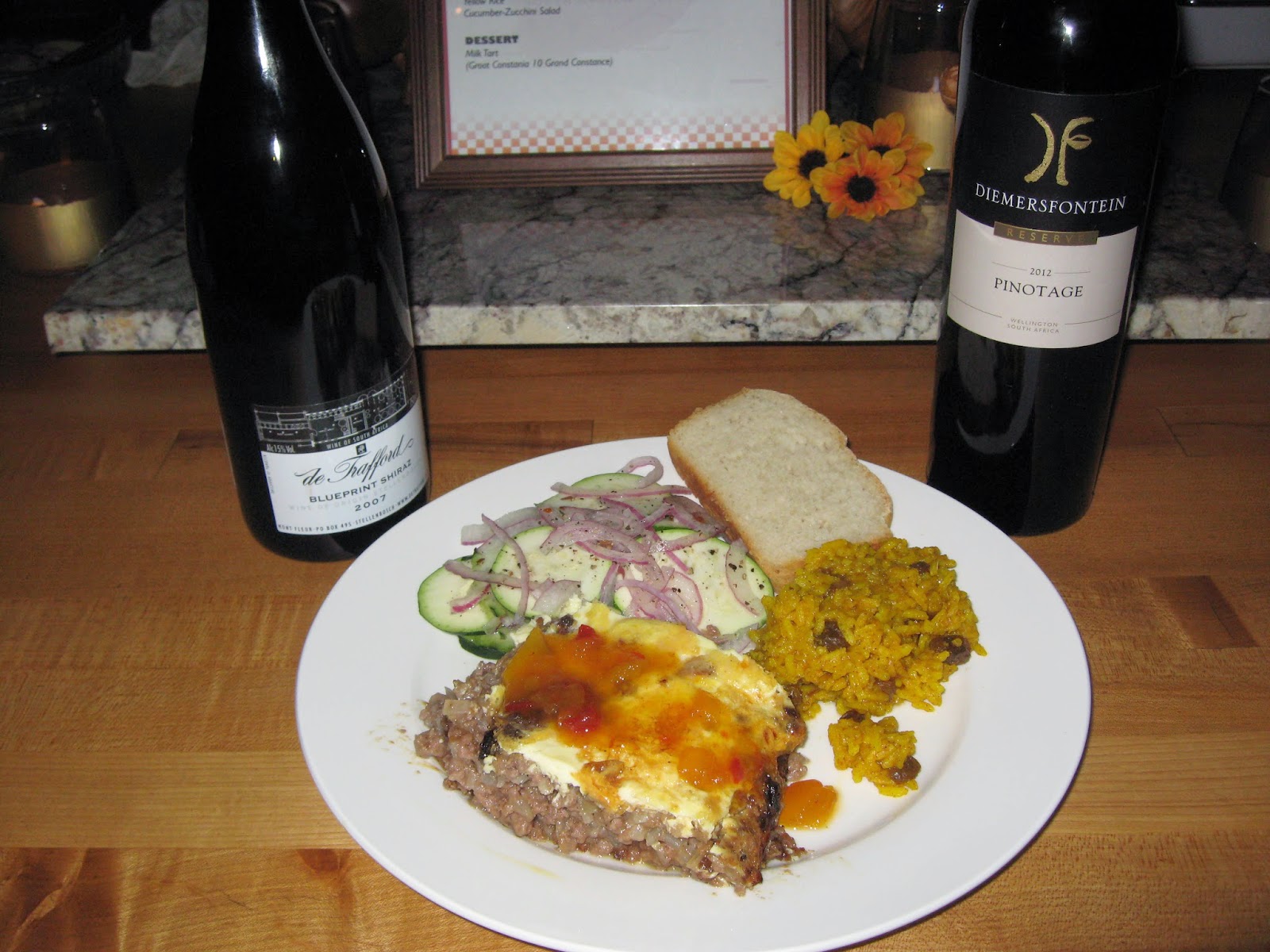 For our main course, our hosts prepared Bobotie (a South African version of Shepherd's pie). Bobotie is like meatloaf with raisins and with a baked egg and cream topping. This was served with yellow rice, a cucumber-zucchini salad, and a side of mango chutney. Talk about filling! The fresh salad and lightly spiced yellow rice were a nice accompaniment to the heavy meat course. For the pairing, my immediate thought was to go with the local specialty: Pinotage. But then again, a nice Syrah could do well too. The compromise….have two wines available for the course. I chose the Diemersfontein 2012 Reserve Pinotage from Wellington, and the second wine was De Trafford 2007 Blueprint Shiraz. After trying both wines, the wine of choice for this meal was definitely the Pinotage. This classic South African grape is a cross between Pinot Noir and Cinsault. It has become one of the signature grapes of South Africa. 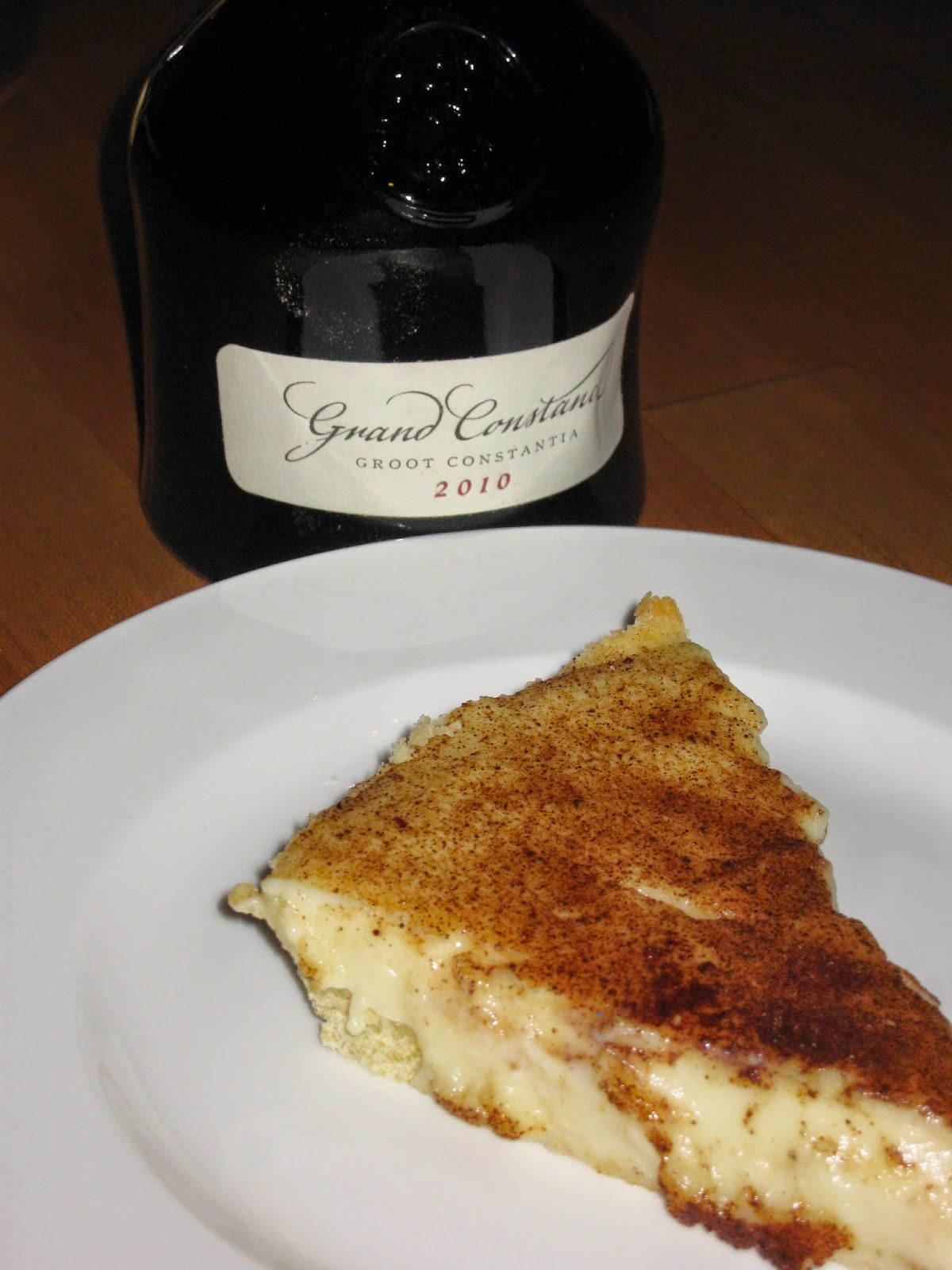 Our final course (not that we had much room left) was a milk tart. The pressed flour crust was rich, and the sweet milk, wasn’t overly sweet. After my last blog, I had to find the other dessert wine from Constancia. I had already found the Klein Constancia "Vin de Constance", for my blog, so the challenge was to find the Groot Constantia Grand Constance for this dinner. I was able to locate a 2010 vintage (375ml bottle), which cost a whopping $58 (before taxes and shipping). The eight of us finished this bottle off!

In case you are wondering, I was able to find a nice selection of South African wines online, through www.cape-ardor.com. Some of the required spice mixtures were also not available in our area, so with a little bit of research, we were able to grind our own spices to create the needed blend.
As with all our wine pairing dinners, the idea is to have fun, learn about new cuisines and cooking techniques, and share with friends. I hope this quick recap will inspire you to create your own “gourmet tasting group” and share your experiences. Bon Apetit!
Posted by The Sommelier: