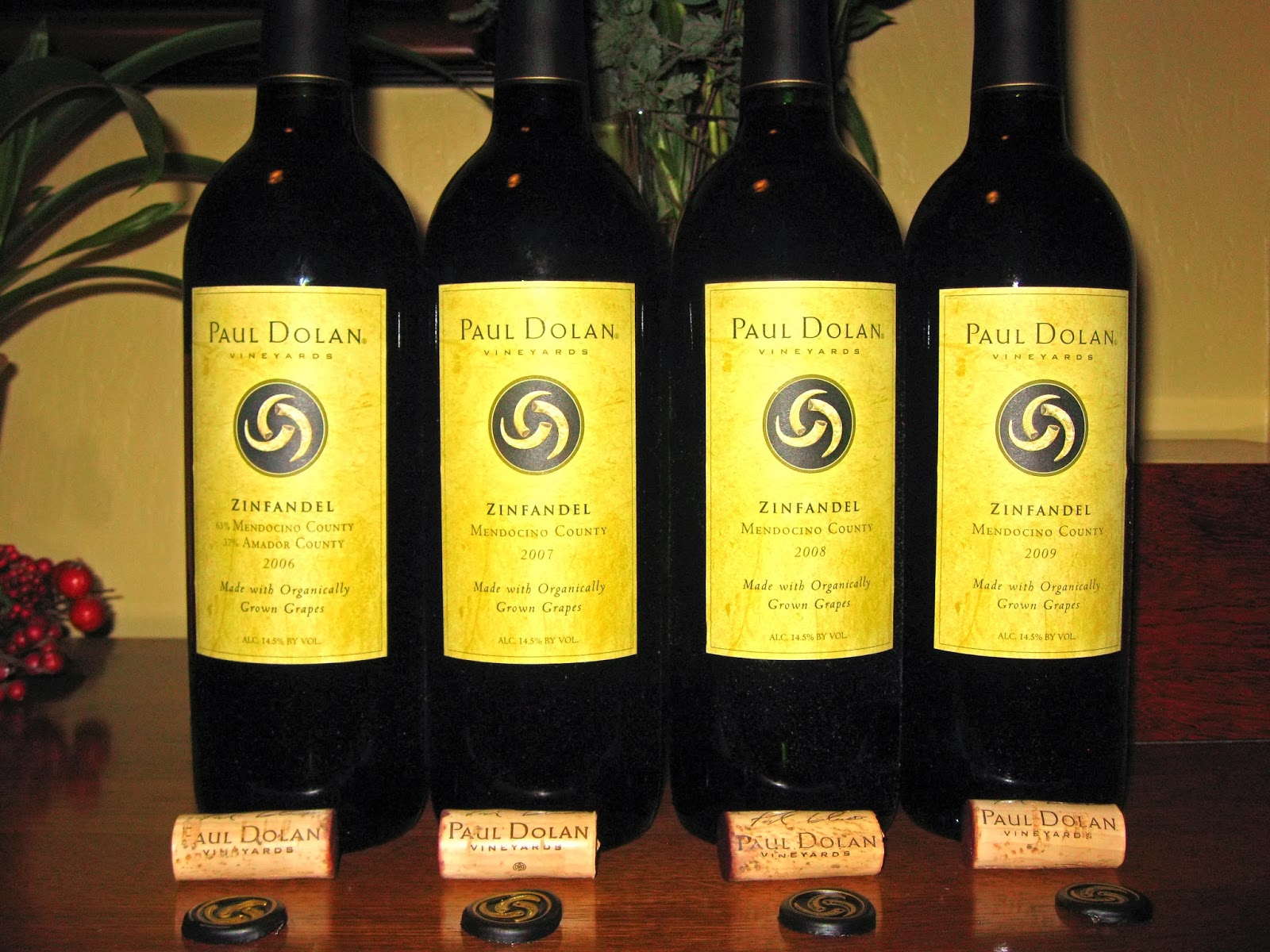 If you are a regular follower of this wine blog, you know that I am always looking for an excuse to do wine pairing dinners. I really enjoy themed dinners, but occasionally, opportunities present themselves to try something different.

This week, a small group of us got together to taste a four year vertical of Paul Dolan Zinfandel. I must admit, I was not familiar with this winery. They are an organic/biodynamic winery out of Mendocino County, in Northern California. We were able to pick up the 2006, 2007, 2008, and 2009 Zinfandels. Each wine was opened about an hour before our dinner, and allowed to breath. 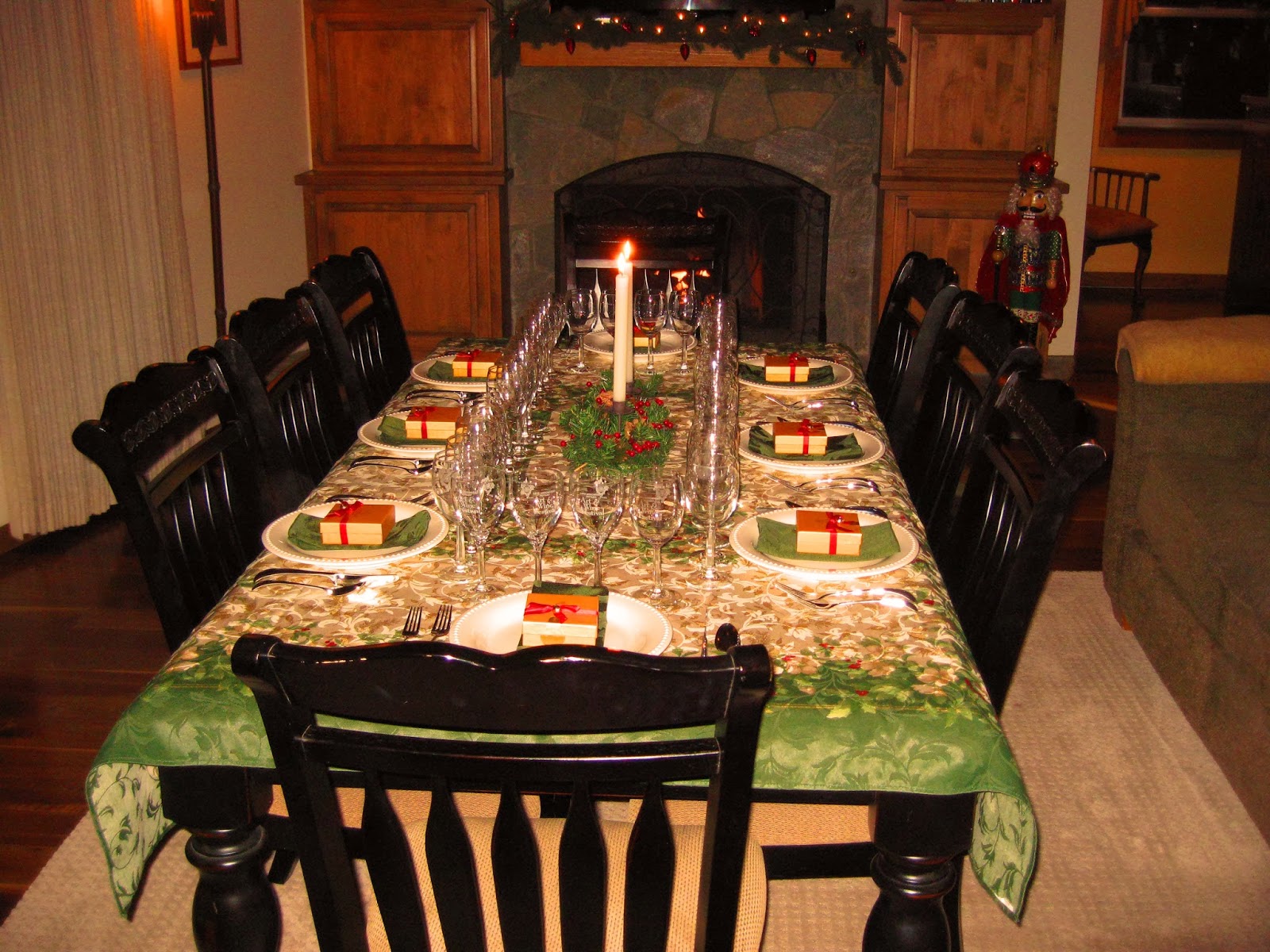 Each couple brought one course for the dinner, and there were four couples total. The menu consisted of an opening Caprese "style" salad. I say, "style" because, not only did it have tomatoes, basil, and cheese, but it also had avocado, and the cheese was a homemade cheese, which followed a traditional Croatian recipe. Why Croatian? Because it is thought that the Zinfandel grape originated in Croatia.

The main course was a Beef Bourguignon, following the Julia Child's recipe, and side dish of scalloped potatoes. My responsibility was the dessert. I like to experiment, so I made a blackberry Panna Cotta, topped with fresh blackberries and bittersweet chocolate shavings. I also made figs, poached in Zinfandel. The poaching liquid was later reduced to a syrup, and the figs with syrup were poured over vanilla ice cream. 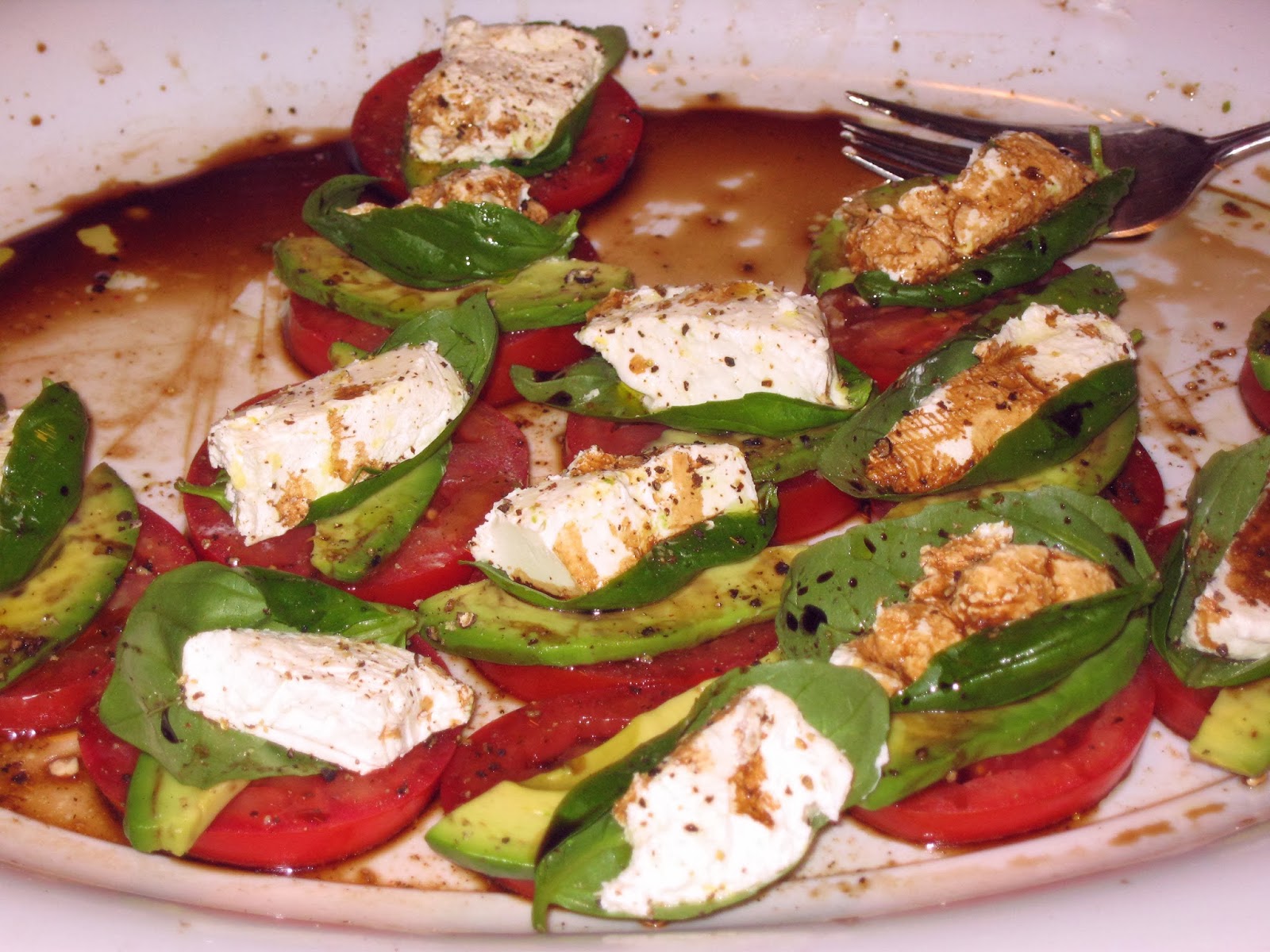 All four wines were poured, and set in front of each place setting. The first noticeable difference was the color of each vintage. The '06 and '07 vintages were visibly lighter than the '08 and '09.  My process of tasting verticals (particularly with food) is to look at each wine in the glass, smell, then swirl and smell, then taste. After that first taste, I taste again, then take a bite of food, and taste wine again, to see how it changes with the food.

The 2006 Paul Dolan Zinfandel was the only vintage that had grapes from two growing regions. While all the vintages had grapes from Mendocino, the 2006 had grapes also sourced from Amador County. As mentioned, the 2006 vintage was lighter in color. It was fairly light bodied (for a Zinfandel). The alcohol level in all four wines as the same, coming in at 14.5% (again, low for a high sugar grape, like Zinfandel). The '06 vintage still had some fruit to it, but there was also some herbs on the nose. On the palate, the wine had some peppery notes, very light fruit, and moderate acidity. The most interesting thing about this wine, was how it changed in the glass over time. Most of the food overpowered this lighter Zin. But, by itself, I found it a nice drinking wine, particularly at under $20/bottle. I wouldn't run out and purchase this vintage, as it is already showing its' age. 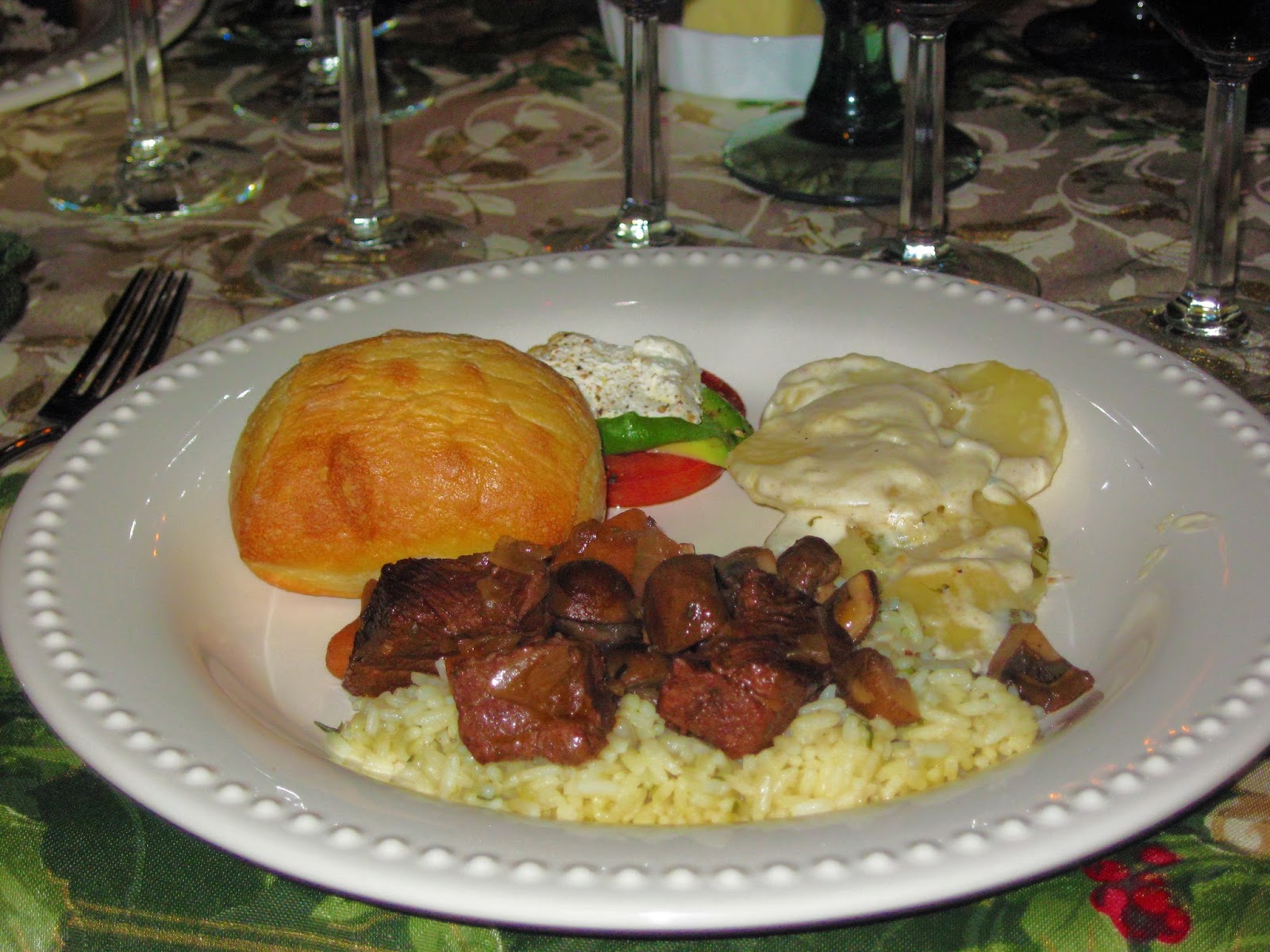 The 2007 Paul Dolan Zinfandel was also light in pigment, and was by far the lightest on the palate. But, I found this vintage to be my favorite overall. It had the most complex nose of all four. There was some blackberry and cherry fruit, mixes with herbs, and bit of tobacco or leather. As with the 2006, this vintage was a bit light for the food (it couldn't hold up to the vinaigrette on the salad, or the richness of the beef). Of the four, this was my favorite...maybe not for pairing with food, but as a nice drinking wine.

The 2008 Paul Dolan was a dark ruby colored wine, and had mixed reviews. One person in our group picked this as his favorite, while most did not care for it at all. I am almost wondering if there might have been something wrong with the wine, as it was the only one in the vertical, that was purchased from a different retailer. There was a strong bacon smell to the wine. It was also the most "jammy" of the four. There also seemed to be a lot of oak on the nose, and a mushroomy character to the wine. This was my least favorite vintage of the four. Finally, the 2009 Paul Dolan Zinfandel was also very dark in color, and was had the heaviest body of  the four. The weight of the wine made it the best for pairing with the meal...even up against the vinaigrette dressing on the salad. There was lots of black fruit and spices on the nose, making this more of a "jammy" wine. But, the fruit wasn't overpowering, there was a nice balance in all the components. Of the four vintages, this one tasted the most like what you expect from a Zinfandel. 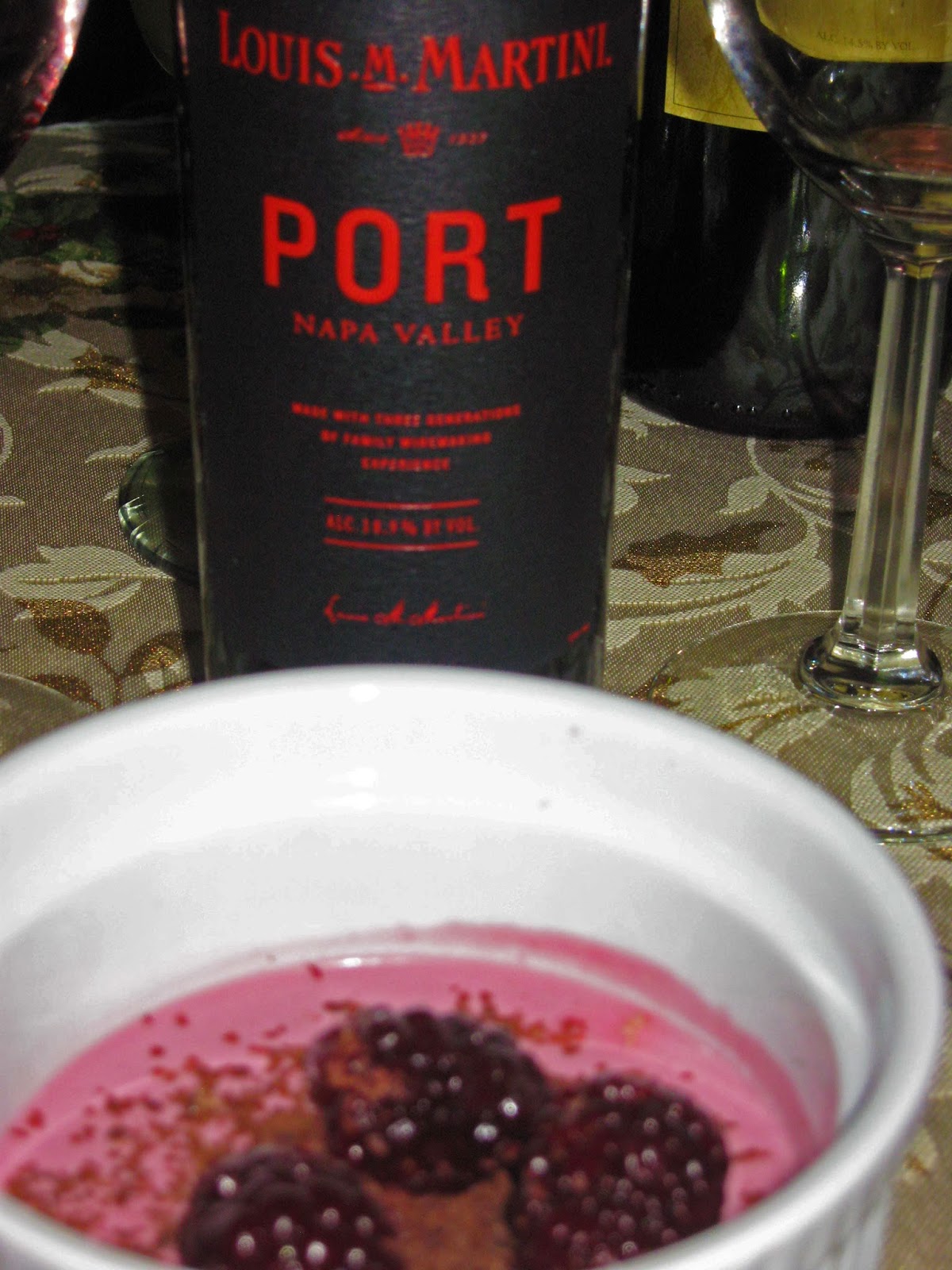 As I said, I made the two desserts. Not knowing what the flavor profile of the wines was going to be, I made one with limited sweetness (blackberry panna cotta) and one with a Zinfandel syrup (poached figs). Remember you always want your wine to be sweeter than the dessert. Neither really worked, so we opened up a bottle of California Port, and called it a nice end to the evening.

I hope this will inspire you to try your own vertical wine tasting. sometimes they work, sometimes they don't. But at least you get to drink wines, and get together with friends. And, isn't that what it is ultimately all about?