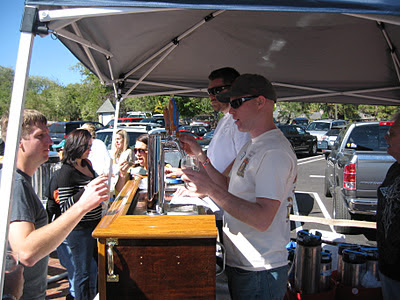 "Hey, you're the wine guy. Why are you drinking beer?"...yes, I heard that a lot this last weekend. I attended the 2nd Annual Lake Arrowhead Brewfest. I repeated (more than a few times) that I'm not just the "wine guy", but as a Sommelier, my course of study included wine, beer, spirits, sake, and a little bit about coffee and tea (as well as some cigar study on my own). While my passion is with wine, I do have a background in beer. About 15 years ago, I started making my own home brew, and still have all the equipment, should I decide to start up again. If you missed my blog on beer, click here. 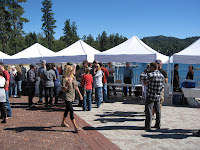 The 2nd Annual Lake Arrowhead Brewfest was sponsored by the Lake Arrowhead Chamber of Commerce, in conjunction with the local Mountain Brew Club. This year, the brewfest was located in Tavern Bay, right on the shore of Lake Arrowhead. The cost for entry was $30/person ($25 if you bought your tickets in advance). The entry fee included a commemorative beer glass, a list of brews on tap, and a ballot to vote for the best beers of the day. 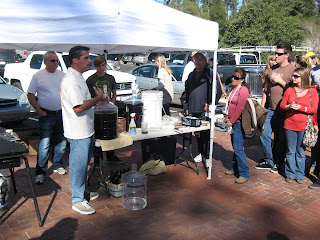 The weather was perfect and all the easy-up tents welcomed me, as I entered the "beer garden". Each of the tents offered something different. There were five professional breweries in attendance: Stone Brewing Co.; Hangar 24 Craft Brewery; Inland Empire Brewing Company; On the Tracks Brewery; and Mountain Brew (from Big Bear, CA). At the northeast corner of the beer area, was a large tent with six taps. This was run by the our local brew club. Every hour, the six taps were changed out, and six new local brews were presented for tasting. The Brewfest opened at 1:00pm and lasted until 5:00pm, so there were 23 local beers (and one German Apple Cider) available for tasting. Next to this tent was a table with a large ice bucket, filled with bottled beer. These were an assortment of home brews that were not in kegs, but still available for tasting. There were at least five different beers here. The last tent was a demonstration booth. Here, Jim Grant (one of the local brew club members) showed all the different steps to making your own beer. Attendees were able to taste the beer at all stages of production, and even cap their own bottle of beer. 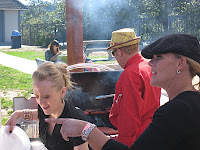 Outside the beer garden, there was a tent offering Brewfest T-shirts, and a DJ playing music for the crowd. A little further out, there were two local caterers serving up food that was meant to go with beer. First was Texifornia Tamales. Jeff offered an assortment of different tamales. Next to them was Randall Holloman, and his Lake Arrowhead Catering crew, serving up bratwurst and knackwurst (with or without sauerkraut). 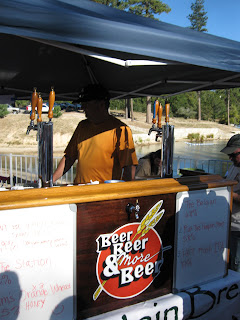 So I know the question that is stirring in your mind...how much beer could you try for the entrance fee? In general, the answer is...as much as you want. I'm guessing there had to be about 40 beers to try, and I put a decent dent in that number. The main thing holding me back was how full I get when drinking beer (even small amounts), and the two sheriff deputies that were sitting just outside the parking lot, watching everyone (and that's a good thing, as there were people that I'd hate to see drive away from this event). I started taking notes on my tasting, but eventually just tasted, and stopped the note taking. I can verify, from my notes, that I did try 14 different beers in the 2 1/2 hours I spent there, but I know I tried more than that.

Just like wine, everyone likes something different. I can tell you that "hoppy" beers are not my style. I just find them too bitter. A lot of the beers presented, had a lot of hosp, and were very bitter. I tend to be more of a stout drinker, and like that nutty, mocha, smooth flavor. But, I will try anything, and I did. While the professional breweries served up pretty safe examples of their product, the Mountain Brew Club was more daring (in taste and name). I sampled such beers as: Watermelon Wheat; Smoked Porter, Blueberry Wheat; German Black Ale; Pumpkin Stout; "Hot Flash" IPA; "Nice Pumpkins" Brown Ale; and "Happy Sailor" (a light ale infused with Sailor Jerry Rum). 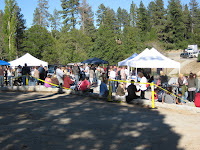 Of the beers I tasted, my favorite of the day was "Drunk Monk Belgian" ale, made by Steve Keefe. I also enjoyed "The Curtains Match Red Ale" by Nolan Calkins, and the "Oktoberfest" by professional brewery, Big Bear Mountain Brewing Co. The oddest beer had to be the watermelon wheat...it was refreshing, but watermelon and beer just seemed strange to me. The two pumpkin beers were also interesting. One had very little pumpkin flavor, while the other tasted like liquid pumpkin pie.

Congratulations to the two winners of the Peoples Choice awards. For the professional brewers, Stone Brewery won, and for best homebrew, the award went to Steve Keefe for his Happy Sailor ale.

So, mark you calendar for next year, and plan on coming up to Lake Arrowhead for some beer tasting on the shores of the lake...and I'll see you there!
Posted by The Sommelier: