What's in the Wine Cellar? 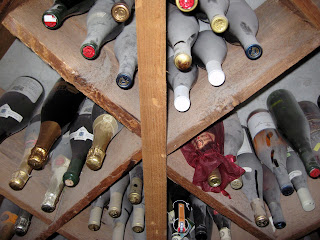 For months now, a friend of mine has been asking me to come over to her house, and look through the bottles in her wine cellar. She had told me that there might be some old Bordeaux and Burgundy in there, but she wasn't sure what she had.

We finally got together (along with a few friends), and made an evening out of it. We all brought some wine..."just in case". 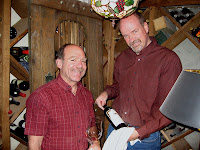 I had seen her cellar a number of years ago, but really didn't pay much attention to what was inside. Well, I should have! What I found upon entering her cellar was a room without any humidity or temperature control, and everything was covered in dust. Since the cellar backed up to the hillside, the temperature appeared cool enough, but I couldn't judge the swings in temperature. My biggest concern was the humidity. We live at 5,200 feet in the mountains. Our air is thinner, and definitely drier at this altitude, which can play havoc with wine corks. 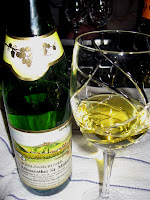 We gathered some towels, and started carefully wiping down the bottles to see what we had in stock. There were a lot of old bottles of California Chardonnay and Sauvignon Blanc, most of which had turned brown in the bottle. We even found a 1989 Sutter Home White Zinfandel. Then our luck turned around a bit. We discovered about 10 bottles of German Riesling: 1987 Klusserather St. Micheal QbA. Next we found six bottles of White Burgundy: 1983 Clos Du Chateau Meursault. We thought each of these white wines might have potential to have survived their storage treatment, so we carefully moved one bottle of each to the refrigerator. I purposely chose the bottles that had, what appeared to be, the softest corks...in hopes the ones we left in the cellar would be in better shape. More on the tasting later. 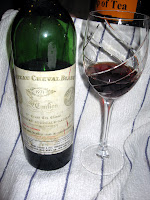 Then, things got a bit more interesting. We came across one bottle of 1986 Clos Vougeot (Red Burgundy - Pinot Noir), then a bottle of 1990 Chateau Ducru-Beaucaillou St. Julien Bordeaux, followed by a 1980 Chateau Baronne Phillipe Rothschild (later known as Chateau Armailhac), and a 1961 Bolla Amarone Cantina de Nanna. Then, what we hoped were the finds of the evening: 1-bottle of 1971 Cheval Blanc, and 3-bottles of 1966 Chateau Latour.

I had brought all my old vintage charts, and my Bordeaux Chateau book, to look up tasting notes on the wines. We knew that there were some bad vintages in the bunch, but held out hope for the Chateau Latour (which was still wrapped in its' original tissue paper). It's always that age old question of Drink or Hold.

We opened the two whites first. The Riesling was past its' prime, but you could taste what it used to be. The petrol aromas were pretty evident, but any notes of sweetness were long gone.The remaining bottles may be better, but I doubt it. The white Burgundy (Chardonnay) was all yeast, and was golden in color...but nothing drinkable. 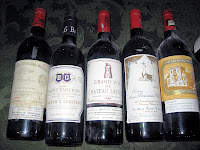 Next we moved to the reds. As I cut into the foil caps, I could tell we had issues. Almost every bottle had leakage, and mold on the cork and capsule. The next challenge was getting the corks out of the bottle in one piece, which didn't happen too often. While I can say I tasted a 1966 Chateau Latour, I can't tell you how good it was, as it had turned. Not to vinegar yet, but was beyond its' lifespan. I'll tell you, there is nothing more depressing than watching Cheval Blanc or Chateau Latour being poured down the drain!

To try and save the evening, we opened up a 1987 Heitz Martha's Vineyard Cabernet Sauvignon. For the first five minutes, the wine was still there. You could taste a bit of remaining fruit, but the tobacco and leather notes were soon overtaken by an oxidised brown flavor. For five minutes, we were loosely transported back to 1987. 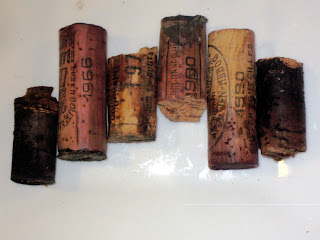 We spent a total of five hours going through the cellar, eating dinner and appetizers, and tasting the wines we hoped had survived. In the end, the Brunello and Petite Verdot we had for dinner, proved to be the best wines of the evening. But the chance to try these wines was something to remember, and a true testament to properly storing your wines. Now might be a good time to review proper storage techniques, and save those valuable wines!
Posted by The Sommelier: