Drinking with the Irish 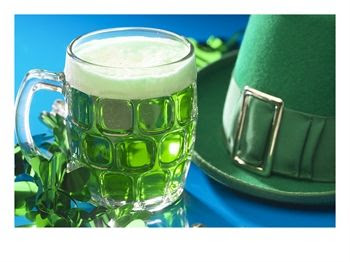 On March 17th, everyone is Irish. We all remember growing up as kids, and having to wear green on St. Patrick’s Day, or else you would get pinched. Now, as grownups, we celebrate the “wearing ‘O the green”, by hoisting a few Stouts at the local bar.
Ireland is renowned internationally for its beverages. The pub culture is legendary (whether deserved or not). So what do the Irish drink? The most notable drinks are beer and whiskey (note that in Ireland, whiskey is normally spelled with an “e” in the word...rumor has it that this has to do with Catholic spelling versus Protestant spelling). Ireland is also known for their Mead, a honey wine.
The presence of Whiskey in Ireland can be dated back to the 12th century. The Normans couldn't pronounce the Gaelic 'Uisce Beatha', which means 'Water of Life'. Instead, they used the word 'Fuisce' for ‘Uisce’, which became whiskey later on. Whiskey has been an Irish drink for centuries (and probably predates the Scottish version - Scotch). It is thought that Monks brought the distilling techniques from Europe, which originally came from the Arabic world (see my article on spirits)

The first commercial whiskey was established in Ireland in 1757: Kilbeggan Distillery. There are currently only four operating distilleries in Ireland, they are: New Middleton Distillery (Jamesons, Powers, Paddy, Midleton, and Redbreast); Old Bushmills (all Old Bushmills, Black Bush, 1608, Bushmills 10-, 12- and 16- and 21-year-old single malts), Cooley Distillery (Connemara, Michael Collins, Tyrconnell, Feckin and others) and  Kilbeggan. Another well-known brand is Tullamore Dew (now Scottish owned and operated, but still produced in the New Middleton distillery).
Key regulations defining Irish whiskey and its production are established by the Irish Whiskey Act of 1980. They are as follows:

Beer is still a favorite drink for the mass population in Ireland. At one time, there were over 200 breweries in Ireland, mainly centered around Dublin. Today, there are only 12. Ireland is most popularly associated with Guinness Stout, but Stout only makes up about 32% of all beer produced. 63% of beer production is actually lager. Harp is the most popular lager in Ireland. Other noteworthy malt beverages include Smithwicks, Kilkenny, Murphy's and Beamish. Ciders are also quite popular.
Another popular drink for St. Patrick’s Day is Irish Coffee, however, this may, or may not have been created in Ireland. While it appears to have come from Ireland, it’s popularity, and history starts at the Buena Vista Café in San Francisco, in 1952.

To make an Irish Coffee (Buena Vista Style), fill a six-ounce goblet with hot water to heat, then empty. Pour hot coffee into hot glass until it is about three-quarters full. Drop in two cocktail sugar cubes. Stir the sugar until completely dissolved. Add a full jigger of Irish Whiskey. 48 hour aged cream (frothed to a precise consistency) is carefully poured over the back of a spoon initially held just above the surface of the coffee and gradually raised a little. The layer of cream will float on the coffee without mixing. The coffee is drunk through the layer of cream.
So what if you are preparing the traditional Corned Beef and Cabbage for St. Patrick's Day? What should you drink with that? I have a couple suggestions: 1) if wine is your choice, try a Beaujolais Village (Morgon, Moulin-a-Vent, or Regnie); 2) Beer...go with a stout or dark lager.

And, after all that, did you know that the Irish drink more tea per capita than any other nation on earth?
Posted by The Sommelier: