Carménère - The lost grape of Bordeaux

Have you tried a merlot from Chile in the past few years? If so, are you sure it was merlot? You may have been tasting carménère (car-men-YEHR).  Let’s take a quick look at Chile, and how carménère may be the “signature wine” of Chile.

Spanish missionaries brought the first vines (pais) to Chile around 1549 (there are no native grape vines in South America). Between 1840 to 1850, French immigrants, brought with them, the vines from their homeland: merlot, cabernet sauvignon, chardonnay, sauvignon blanc, plus many others. Chilean winemakers modeled their wineries after those in France and began planting in the valleys around Santiago.

Vine cuttings of carménère were imported by growers from Bordeaux, where they were frequently confused with Merlot vines. Carménère was part of the field blend, grown with merlot. So, when cuttings were brought from the merlot vineyards of France to Chile, carménère came along with it. In Bordeaux, carménère was considered as good as cabernet sauvignon, but it had irregular yields, so was not as reliable.

Chile is a very isolated country. Bordered by the Pacific Ocean on the west, the Andes to the East, the driest desert on earth (Atacama) to the north, and the ice fields of Patagonia to the south….Chile is apart from everything. This isolation prevented Chile from the phylloxera louse (a serious vine killing organism).  In the 1870s, this louse spread all throughout France, and from there to other European and North American vineyards, destroying the vines at the roots. Among those displaced by phylloxera were winemakers, growers, and coopers (barrel makers). To this day, the wines of Chile come from vines that grow on their natural rootstock.  Most other growing areas in the world require that the vines be grafted onto phylloxera resistant rootstock. Can you taste the difference?

For a while, Chilean growers thought carménère was merlot and labeled their wines as such. Evidently “Merlot Chileno” was thought to have a distinctively green tasting characteristic for many years. Then in 1994, thanks to DNA testing, it was discovered that the reason for this was that much of the merlot production included, or was, carménère.

Genetic research has shown that carménère may be a distant relative to merlot. Carménère buds and flowers later than Merlot and the yield is lower. When young, carménère leaves have a reddish hue underneath, while the leaves of merlot are white.  Merlot ripens two to three weeks earlier than carménère. 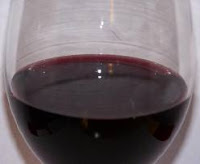 As a wine,  carménère has deep red color, and low acidity. When ripe, it displays black plum, blackberry, coffee, grilled meat, soy sauce, and spice. The tannins are gentler and softer than those in cabernet sauvignon and it is a medium body wine. When produced from ripe grapes, carménère has a fruity, cherry-like, flavor with smoky, spicy and earthy notes. Its’ taste might also be described as dark chocolate, tobacco, and/or leather.


So, is this the “signature wine” of Chile? Give carménère a try, and let me know what you think of this lost grape of Bordeaux.