Those of you who have joined me at wine tastings, hear me throw out descriptions that may or may not make sense to you. I often refer to wines as "old world" or "new world", or I might describe a wine as being "old world" in style. So, what exactly do I mean?

"Old world" refers to wines grown in European countries. These countries have long history with wine growing, many going back several hundred, or even thousands of years. The most notable countries would be France, Italy, Spain, Germany, and Portugal. There are many others that are considered old world, but we just don't see too much of their wine in the United States. some of the less known are: Austria, Romania, Switzerland, Greece, Hungary, plus many more. 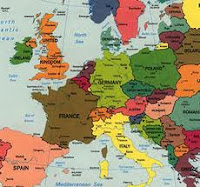 "New world" includes all the other areas. The most obvious would be: The United States, Australia, Chile, Argentina, New Zealand, and Canada. The less obvious "new world" regions would be South Africa and Mexico. The reason I say "less obvious" is that it seems that wine has been in these areas for a long time. In fact, South Africa has been producing wine since the 1600's and Mexico saw the introduction of wine in the 1500's with the arrival of Spanish missionaries.

Geography aside, there are differences in styles of wine. The following is a generalization, as each region makes its' own style, and there are regulations that may or may not determine the style of the final product. Old world wines tend to emphasize terrior, while new world wines tend to emphasize the grape variety. Have I lost you yet? Terrior is a French word that really has no translation in English. The best description is that it means a sense of place. This includes the soil, climate, sun exposure (topography). The goal of old world winemakers is to not meddle with the wine, and let it express the place that it came from. Probably the best example of this is in Burgundy, France, or Mosel, Germany. Both of these areas have long traditions of growing vines in the most proven locations, with time tested growing techniques. Have you ever noticed that Pinot Noir from Burgundy or Riesling from Germany tastes different than the same grapes grown in California? These are the same grape varieties (other than clonal differences) but they just taste different. I find the Pinot Noirs from Burgundy to be more earthy than their new world counterparts that are much more fruity. Many people will argue that terrior is a myth, but try wines from neighboring vineyards, and you will taste a difference. Again, a generalization, but I find old world wines to be lower in alcohol, smoother (subtle) and in most cases, more complex than new world wines. new world wines tend to be bolder, and fruit driven. To me, this means better for pairing with food. Think about it, earthy complex flavors work with earthy, complex foods, but high alcohol and high fruit don't work with a lot of foods. New world wines might also be more manipulated (irrigation in the vineyards, natural compounds added to the wine to adjust acidity, sugar, tannins, etc). The goal is to emphasize the fruits' potential.

The last difference between old world and new world has to do with labelling. Old world wines typically are known by their regional name (ie Bordeaux, Rioja, or Chianti), whereas new world wines are known by variety (ie Cabernet Sauvignon, or Chardonnay). If you are buying old world wines, and you really like Chardonnay, then you would need to know that Chablis, or Pouilly Fuisse are both made with Chardonnay.

Here's a challenge...buy some old world wines, and new world wines. Do your research to make sure they are the same grape variety, and try them side by side. See if you notice the difference.
Posted by The Sommelier: