Blind Tasting with a "twist" 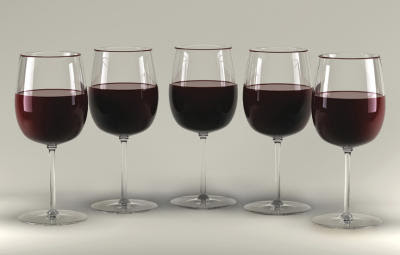 As a Sommelier, I have done numerous blind tastings. Usually we are given a number of different wines, and asked to evaluate the appearance, aroma and taste. Sometimes, we'll have different grape varieties, and other times, they will be wines from the same vintage and grape, but different regions. But, if you were given a blind tasting, could you tell the difference between a low priced box wine, and a higher priced Napa Cabernet Sauvignon?

This was the scenario at a recent wine tasting for the Arrowhead Wine Enthusiasts Club. I had told the participants that they would be tasting all wines from California. I gave them a tasting sheet, with the typical characteristics that would be found in the wines they were tasting. Next to each characteristic were four columns for each of the wines. They were asked to evaluate each wine for appearance, nose, palate, and then their final conclusions.

Some of our wine club members are not red wine drinkers, so I had a nice bottle of Heitz 2010 Napa Valley Chardonnay. Suggested retail on this bottle is $21.000, but I picked it up for $15.99 at Total Wine (all the wines for the tasting were purchased at Total Wine, which has a pretty good domestic selection). This Chardonnay had a nice balance of oak and creaminess (not over the top on either). A good balance of acidity, and fresh fruit, particularly pear and apple.

When it came to the actual blind tasting, I put the wines in carafes. The challenge was to not give away what the tasting was about. Everyone knows that at my tastings, I organize my wines from fruit/sweet to aged/dry (left to right). I couldn't do that with this tasting, so I randomly put the numbered carafes on the tasting table, and let the tasters try the wines in what ever order they preferred.

Before giving any results away, I will tell you that one wine stood out with most tasters, before they even had tried it. This wine looked much lighter than the other three. Other than that, all the wines had a nice ruby color them. All wines were Cabernet Sauvignon, from California. I had purchased wines that represented the ever more specific AVA's of California. I started with a California Cab, then went to a North Coast Cab, then a Napa Valley Cab, and finally a Stags Leap Cab (think about that Russian nesting doll with ever smaller dolls inside, and you can picture how each wine got more specific - see my article on AVA's).

The wines tasted were as follows. I have included the tasting notes, or comments from the participants: 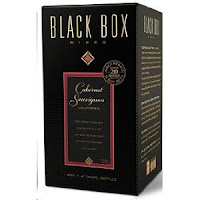 Black Box 2009 California Cabernet Sauvignon. Cost was $14.99 for a 3.0 litre box (equivalent of four bottles). This was the wine that stood out as lighter in appearance. There was limited oak, and tannin in the wine. Some aromas of red berries, but very subdued. The finish was fairly short. Out of forty tasters, two preferred this wine as their favorite.

Cartiledge & Browne North Coast 2008 Cabernet Sauvignon. Cost was $9.99 for a standard bottle. this wine had a synthetic cork. The grapes for this wine were sourced from all over the North Coast AVA, and contained a small amount of Merlot in the blend. This wine had medium oak and tannin, and tasted more like a California Cabernet than the first wine. There were more fruit notes of red berries and black currants, and some additional notes of tobacco. I nice balance of acidity and alcohol. Once revealed, this was was determined to be the best value of the night.

Sequoia Grove 2008 Napa Valley Cabernet Sauvignon. Cost was $28.99 for a standard bottle. Natural cork stopper. This wine was darker in color than any of the other three wines. The wine had black currant, red cherry, a bit of pepper, cedar aromas, and smoke. There was also a bit of minerality, that reminds one of "Rutherford dust" . This was full bodied, with medium (+) tannins. A lot of structure, and a long finish. This was the overall favorite of the night (at any price), but the two that loved the Black Box, didn't like this wine at all.

Martin Ray 2007 Stags Leap Cabernet Sauvignon. Cost was $39.99. Unfortunately, one of the three bottles we opened was corked. The wine (while the oldest vintage) was still very tight and closed. It took a lot of air to open the wine, and expose the black berries and plum that eventually came out. The tannins were firm, and there was a lot of oak present in the nose, and finish on the palate. There were mixed reviews on this wine, but in fairness, the wine would benefit from more bottle aging, or opening up about three hours in advance of drinking.

Overall, the blind tasting was an interesting experiment. As I pointed out, there was no "right" or "wrong" in how the tasters evaluated each of the wines. For those that loved the Black Box, they now know that they don't need to spend a lot of money on a bottle of wine, to be satisfied. Many also discovered that there are decent wines out there for around $10. In general, the more specific the AVA, the more characteristics the tasters were able to identify.
Posted by The Sommelier: