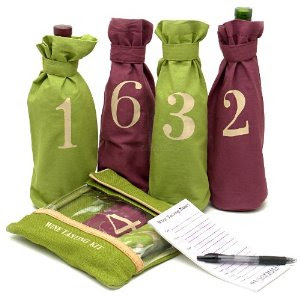 Last week I conducted a blind tasting for our local wine club. I had five red wines, all in bags. Included with the tasting were notes for eight different red wines. The challenge was supposed to be figuring out what wines were in each of the bags.

Earlier in the week, I visited my (not so local) wine store, to find "classic" examples of single variety wines. I knew that I wanted a Cabernet Sauvignon. Since we are in California, I went for a Napa Cab, in particular an Oakville Cab. My biggest challenge was finding a good example that was within our club budget. We have always concentrated on wines around the $20 range, but this has been getting harder as we see prices going up. But, I did find a nice one: the 2007 Balius Oakville Cabernet Sauvignon. This wine had a lot of oak in it, so much of the fruit was masked. The tannins as well as some of the earthy notes, you find in Rutherford Cabs, made this a fairly obvious variety to determine.

Of course, if I did a Cabernet Sauvignon, then I would have to do a Merlot, to see if people could really distinguish the difference between these two grapes that are so entwined together. I decided to go with the 2008 Chateau St Michelle Indian Wells Merlot. Well, I thought I was buying a 100% Merlot, but I come to find out that they added a little Syrah to the Merlot to make a bit richer mouth feel and add more fruit character. As it turned out, this was the wine that most people got correct in the blind tasting.

Next choice was a Syrah/Shiraz. I debated going back to California for a Paso Robles Syrah, but decided that the high extraction and even higher alcohol that is so typical, might not be the direction to go, so I narrowed it down to a Rhone Syrah or an Australian Shiraz. Again, cost constraints led me towards the Australian version instead of the classic Rhone wines (that I personally love). I ended up with the 2008 Penfolds Bin 128 Shiraz, from Coonawarra. I didn't find the "meaty" notes that I usually find in Syrah, but it did have some pepper, but also a lot of "green" notes that didn't seem to sit well with a lot of the tasters. This was probably the least favorite in the blind tasting, but also the biggest surprise, as most had tasted this wine before.


I decided to throw in another grape that I thought most Californians would figure out...Zinfandel. With this grape, I could go all over California and find different styles. Personally, I find Zinfandel one of the hardest reds to determine in a blind tasting. Other than the high alcohol, and medium tannins, everything else can vary: from fruity to spicy, and even sweet to dry. I chose the 2009 Buehler Zinfandel. This Napa Valley Zin had a nice blend of fruit and spice, but could have benefited from a bit of age. At first it was very tight, but as I swirled the glass, it really opened up. This was actually the favorite wine in the blind tasting, and the only one I ran out of.

My last wine had to go back to the old world. Would it be a Sangiovese, Tempranillo, or Nebbiolo? Have you seen the price on good Chianti or Barolo lately? The choice was Rioja (and Tempranillo). The next question was traditional or modern style? Since I love the traditional style, where the wines are released, ready to drink, after being aged at the winery...I chose the 2004 Baron de Ley Reserva Rioja.  To me, this was the most obvious wine in the bunch, but as I learned, most people at the tasting drink mainly new world wines, and could not figure out what this was. However, it just so happens that one of the guests at the tasting was from Rioja, Spain, and this was as obvious to her, as it was to me. I found this to be a wonderfully smooth wine, with notes of tobacco, cedar and blackberry.

At the end of the night, I revealed the wines we had tasted. Some people, who never drink Merlot, are now fans, and others liked the unique flavor the Rioja. I still think that blind tastings are a bit of a "parlor trick", but the goal wasn't to try an determine the exact grape, winery and vintage. the goal was to get people to think about what they were tasting, and notice the subtle (and not so subtle) differences between the grapes. Goal accomplished!
Posted by The Sommelier: