This week my wine club will be doing a tasting of Napa Valley wines. The challenge was to find quality wines, that represent the growing region, at a price of around $20. While looking through the crates of wine at one of my favorite wine shops, I couldn't help but notice the average price wines from this region. While I was able to find five excellent examples at an average price of $21 (including tax)...the overall average of the wines on the shelf had to have been around $50.  Heck, I have a few bottles of Screaming Eagle that are now retailing for well over $1,000/bottle. This got me thinking: how did Napa get to where it is now?

Most of us can't remember a time when Napa Valley wasn't even a blip on the world radar of wine, but the current status of Napa only goes back to the 1970's. How many of you saw the movie "Bottleshock"? This is a great representation of the 1976 judgement in Paris, where the 1973 Chateau Montelena Chardonnay, and the 1973 Stag's Leap Wine Cellars Cabernet Sauvignon, beat the venerable French.

Napa is a Native American word (from the Wappo Indians) that is roughly translated as "land of plenty". According to A History of Wine in America, by Thomas Pinney, the first vines planted in Napa actually came from the Sonoma Mission, and were planted by George Yount in 1838 (in what is now Yountville). Vines were later planted in what was to become St. Helena. The first commercial winery in Napa Valley is credited to Charles Krug (a Prussian immigrant) in 1861, and by 1889 there were more than 140 wineries in operation, including Schramsberg (1862), Beringer (1876) and Inglenook (1879).

The onset of Prohibition (the Volstead Act) from 1920 to 1933, devastated the wineries of Napa Valley. Those that did survive shipped unfermented juice to home winemakers (home winemaking for personal use was allowed), or produced sacramental wine. Jump ahead to 1943, and the purchase of Charles Krug by Robert Mondavi, for $75,000, and you'll see the beginning of the Napa Valley that was to come. In her book, The House of Mondavi, by Julia Flynn Siler, the Napa of the 1960's is described as, "prunes were still the primary crop, and St. Helena's schools sometimes closed during those years to allow children to help out with harvest. The town's population was just a few thousand people." Robert Mondavi was one of the forces behind quality dry wine (prior to this most wines from Napa were jug wine, and fairly sweet, when he broke away from the family winery of Charles Krug, and opened Mondavi Estate. Thus began the "boutique" winery, and the perfection of what Napa could offer. Today, there are more than 400 wineries in Napa. 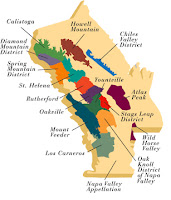 They say there is always one wine that gives you that "aha" moment. That point when you say, "I never knew wine could be this good" For me, that started with Napa Valley. My brother-in-law worked for Mondavi, and I worked for Nestle (owner of WineWorld: Beringer, Meridian, Chateau Souverain). I was living in Utah, where good wine was a bit hard to come by. Family visits from California, kept us stocked on good wine. After seven years in Utah, Nestle moved us to San Francisco, and I was only 45 minutes from Napa. My "aha" moment was during my last week with Nestle. I was at the Stanford Court Hotel (Fournou's Oven restaurant) at the top of Nob Hill, at a dinner with our good friends Nick and Karen Burcher. I ordered the most expensive bottle I had ever ordered, a 1978 Heitz Marthas Vineyard Cabernet. The way the wine worked with the smoked prime rib was eye-opening. Since that time, I have experienced many great bottles, and am always seeking more.

This Friday, our wine club will be trying five wines (four from Napa). Check our website (www.ArrowheadWineClub.com) for the feedback on those wines by going to "Jim's Tasting Room". And, please share your "ah ha" moment, by leaving a comment below.
Posted by The Sommelier: