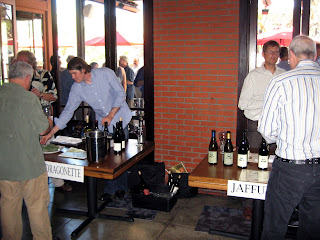 On Monday, I had the opportunity to attend at wine tasting and winemakers dinner, involving the Santa Barbara County Vintners Association. My wife and I attended as guests of the Grape Encounters radio program. The tasting was held at AKA Bistro, in old town Pasadena. It's been a long time since I've been to the area, and it is a really great restaurant town.

The weather was sunny and hot, about 100 degrees when we arrived at about 4:00pm. After finding a parking spot, we wandered over to the quaint alley, where AKA Bistro was located. By the time we arrived, the venue was buzzing with activity. Check in went smoothly, and we were given a booklet outlining the winemakers in attendance. Each page left enough room to take notes on the wines tasted. As soon as we entered, I caught site with a winemaker friend of mine, Brandon Sparks-Gillis, from Dragonette Cellars. I met Brandon, on a fluke, about four or five years ago as he and the Dragonette brothers had just finished destemming a load of Syrah grapes they had harvest earlier that morning. We were actually there to try Ampelos Wines, but after our tasting, Brandon asked if we'd like to try his wines. From then on, I have been a follower, and adamant supporter of Dragonette Cellars. Their wines are excellent, and the tasting at AKA Bistro was no exception. They make an excellent Sauvignon Blanc, which not too many winemakers in California can say. He also served me his newest creation: Grenache. I'm not a big Grenache fan, but those of you who do like the variety, are going to love this one.

There were large groups of people around almost every table. Fess Parker was getting a great turnout, but it may not have all been for their wine...they had an air conditioning vent right above them. Hitching Post, Zaca Mesa, and Kenneth Volk also seemed to draw the crowds. There was no way to get to every winery, much less try the different wines presented at each table. Some of the highlights of the tasting involved the more unusual varieties. I tend to like wines that take a bit of risk, and are different than the norm, so it's no surprise that I was focused in on the blends, and unusual varieties, and stayed away from a lot of the standard Syrah, Chardonnay, Pinot Noir, and Cabernet Sauvignon. Some of the wines that stood out, and might be worth the search, or visit to the winery to purchase were: Bedford Winery Riesling (dry and aromatic); Hitching Post Rose (unusual, made with Valdiguie and Pinot Noir); Kenneth Volk 2009 Negrette Cales Vineyard San Benito (an unusual grape that is something between a cross of Pinot Noir and Syrah); Mosby Sangratino and Mosby Lagrien; Palmina Nebbiolo (I wish they had brought some of their Santita...one of the best dessert wines I've found in California); and of course Dragonette Cellars Sauvignon Blanc and Syrah.

The tasting ended around 6:00, and the group was so large, the winemakers dinner had to be split between two sister restaurants. We left AKA Bistro, and drove back east to Bistro 45, where we were seated in an air conditioned room (thank goodness, as the heat was too much). There were about 100 guests seated for the six-course dinner, which included 10 wines, and visits from the winemakers to each table. The best pairing of the night was the second course which consisted of "house cured salmon with orange blossom vinaigrette and lemon-verbena panna cotta, paired with the Qupe Rousanne Bien Nacido Hillside 2008. The other pairing that stood out was the roast sirloin of beef with a beef "ravioli" paired with the Lafond Syrah/Grenache Santa Rita Hills 2007. During the dinner we met with Gray Hartley (Hitching Post), where he poured one of his library wines, a 1997 Hitching Post Pinot Noir. We also had a nice discussion with Stephen James (Melville) and Arthur White (Arthur Earl). We were also entertained by some amazing card tricks, performed by Chef Anton.

Always a fun time meeting with the winemakers, and then seeing how a chef interprets the pairing of the wines with his creations. Next time you're up in Santa Barbara County, check out any of these wineries, I don't think you'll be disappointed. A fun event, made even better by attending as a guest of Grape Encounters...thanks David Wilson.
Posted by The Sommelier: