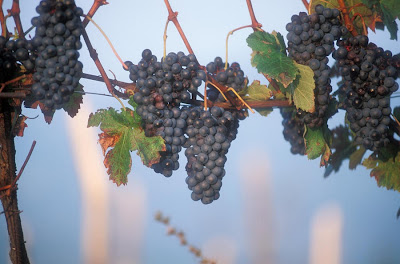 One of the best parts about being a Sommelier has to do with the events I am hired to work. Recently, I was hired for a corporate event, where they needed wine for three separate activities: a boat tour of Lake Arrowhead; a sit down dinner; and in between a wine tasting. While I stuck with more familiar wines for the boat tour, and the dinner pairing...the wine tasting gave me an opportunity to have the group try something a little different. 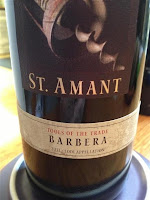 I was a bit constrained in what I could do for the tasting, as the event organizer asked me to keep to domestic wines, and ideally keep to California. One of the wines in my five wine progression was St. Amant Barbera, from Lodi. At less than $20/bottle, this was the one wine that generated the most discussion. While I had many people who knew their wine, I had a similar number of people that weren't experimental, and stuck to their usual. But, not this night!

As I usually do during tastings, I spend time talking about the grapes, the wine, and region,etc. I would guess that 90% of the tasters had never had a Barbera before. I can't tell you how many times I had to explain that Barbera was the name of the grape, just like Cabernet Sauvignon is the name of the grape. So, I thought a quick recap of what Barbera is, might be something to "push" those of you unfamiliar with the grape, to give it a try.

First, Barbera is a red grape, typically seen in the Piemonte region of Italy. This region is most noted for Barolo and Barbaresco (both made from the Nebbiolo grape). But, Barbera makes a very reliable, easy drinking red wine, with a high amount of acidity, deep red color, and cherry flavors.

Barbera is the third most planted grape in Italy (behind Sangiovese and Montepulciano). In its' home in Piemonte, the grape gives it's name to the Barbera d'Asti DOCG (the highest level in Italy), as well as Barbera d'Alba DOC and Barbera di Monferrato DOC. In these regions, Barbera is known as a productive grape, which ripens fairly late, while maintaining its' acidity.

As we've seen with another grape (Zinfandel) in California, the Italian influence is evident. Italian immigrants brought their vine cuttings with them, and the foothills of the Sierra Nevada mountains proved to be a perfect location to grow the grape. Now these old vines are producing some wonderful wines (of course a lot depends on the winemaker too).

As mentioned earlier, Barbera can be a fairly acidic wine, making crisp, medium body, fruity wines. New techniques, including oak barrel aging have helped soften the wine, and make it more complex, if not a bit more conforming to today's tastes. These wines can be appreciated in their youth, and don't require the long aging needed for their Nebbiolo counterparts. The acidity, and low tannin structure of the wine makes for a nice warm weather wine, that can be slightly chilled (yes, you can chill red wines...just not too much). 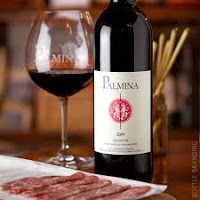 As I have discussed in my wine pairing articles, acidity works great with food. For that reason, Barbera might just become one of your "go-to" grapes. Try it with barbecue (pork, chicken, hamburgers, really any grilled meat will work). That acidity works great with tomato based sauces and pizza (who woulda thunk?). About the only thing it might not work with would be light, delicate fish.

Oh, and about that St. Amant Barbera...it had a nice amount of cherry, blackberries, a touch of spice (maybe licorice) and tannin from some oak aging, while retaining that all important acidity. A nice finish with medium length. Not a wine that you'll want to store too long. Very approachable now.

Some other Barbera producers in California that are worth searching for are Cooper Vineyards, Palmina, and August Ridge. There are plenty more, but these are wines that I have tried, and enjoyed.
Posted by The Sommelier: