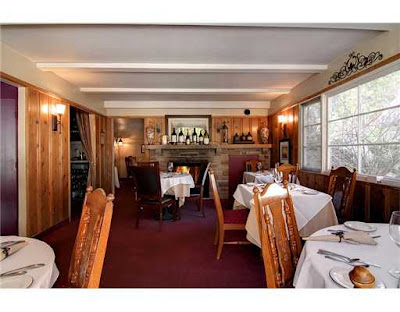 I am sure that most of you, that read this blog on a regular basis, have attended a winemaker dinner at one time or another. Did you ever consider what goes into preparing for those few hours that you sit and enjoy the magic created between food and wine?

This story is five years in the making, and will come to fruition on June 21st of this year. On a fluke, I met the winemakers for Dragonette Cellars five years ago. I was impressed with their wine, and ever since, I have been trying to organize a winemakers dinner in our community. After one of our local chefs visited their winery (at my suggestion), she too was impressed with the quality of the Dragonette Cellars wines. She contacted me about the possibility of doing a winemakers dinner. The following is a recap of what transpired to bring this dinner to the community

On Easter Sunday, I met with John Dragonette at his wine tasting room. We tasted a number of wines, and narrowed down six that we thought would be perfect for a dinner. The Dragonette's do not currently have a distributor in our area, so we arranged a wholesale price for the wines, then called the chef/owner of Casual Elegance, Kathleen Kirk, to discuss possible dates for the dinner. While a Friday would have been ideal, it just didn't work with John's schedule so we settled on a Thursday night. After five years of trying, we finally had a date!

I brought one bottle of each wine back to Casual Elegance, and the discussion began on what could be done for the dinner. All the wines are French varieties, so we thought about doing a dinner that was more French in style. Since we had six wines, we thought about doing a five-course meal. Ideas began to flow, and for the next six weeks, we shared recipe ideas and dinner/wine progression ideas. Additionally, Kathleen had determined that 30 people would be the maximum she could handle comfortably in the restaurant. Word spread quickly about the dinner, and the event was sold out two months in advance. As of today, there is about a 20 person waiting list.

On Memorial Day, four of us met at 10:00am to work on the menu (the palate is more acute in the morning). In attendance were Chef Kathleen, David, Kevin, and myself (three of us are Sommeliers, and involved in different aspects of the wine business). We opened each of the six bottles of wine, and arranged them in the anticipated order of tasting. We each took small tastes of the wine, to orient ourselves, then the challenge began.

Kathleen had prepared a charcuterie plate, to start things off. Each item on the plate was tasted, to see what worked and what didn't. We chose to open with a Rose, and I think we found a good opening act. Next we had two Sauvignon Blancs, both are completely different in style. We paired these with a salad of goat cheese, walnuts and shrimp. The decision was that one of the Sauvignon Blancs worked better than the other, and to add a slice of lemon to the plate for those that wanted a bit more acidity. 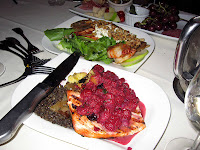 Next in line was the Pinot Noir. We chose an "entry-level" Pinot Noir, in an effort to keep the meal affordable for those attending. Chef Kathleen brought out a salmon filet topped with a raspberry sauce. After some discussion, the sauce would be 'tweeked" a bit, but this one worked. We followed the Pinot Noir with a Grenache based red wine. This also worked with the salmon, particularly with the sauce. At this point, Kathleen brought out chicken, pork, lamb, and beef. Every item (with the exception of the New Zealand lamb) had a different sauce, and side dish. We tried every component of the dish with the Grenache, as well as our final wine, which was the Syrah based, Dragonette Cellars "Seven". We found some great pairings, and some that didn't work. We mixed and matched sauces, and sides, and came to the conclusion that we needed to serve the Grenache before the Pinot Noir (which is completely counter-intuitive, but the Pinot actually came across heavier than the Grenache).

Lastly was the dessert. We had early on decided that we would keep the meal European in approach, so ending with a fruit and cheese platter was ideal. We tried five cheeses, and some different fruits, and settled on three cheeses that would work with any of the leftover wine.

The entire tasting and pairing process took about three house (not including the time that Chef Kathleen took to prepare each item). None of the items we tried were in their final form, or portion size, as this was strictly for planning. In the end, there will be six courses and five wines. I will not giveaway the menu yet, as it has not been published, but look for a follow-up article, after the June 21st dinner for a full recap.