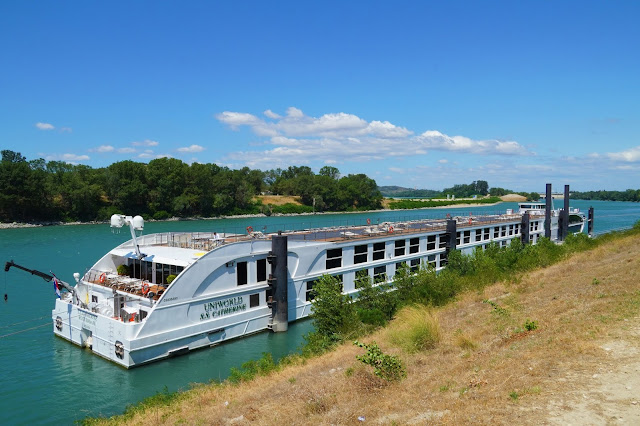 The second segment of our trip to France (click here of the first week of the trip), a Rhone River cruise, commenced with check-in at the SS Catherine, a Uni-World river cruise ship. We had booked the trip through Food & Wine Trails, to join a group organized by Dragonette Cellars. Among those in our wine group was another wine blogger, Randy Smith, who writes TheWineWrite.com. Check him out. Great guy, and interesting interviews with winemakers.

Check-in was simple and stress free. We were taken to our room, and waiting there was a welcome note from the Dragonette’s along with a bottle of their 2018 Happy Canyon Sauvignon Blanc. This bottle would come into play later in our trip, as we never opened the bottle (what’s a sommelier to do when on vacation without a corkscrew).

After dinner, we returned to our room to find a bottle of Champagne on the nightstand, and a note from the Dragonettes and the crew, congratulating us on our 35th wedding anniversary.

Overnight, we travelled from Avignon south to Tarascon. At 8:45am we met on the dock and divided up into buses, and headed to Arles. This was our first experience with the Mistral winds. They were blowing pretty good. It was a short drive, and we walked into the ancient city. We heard about the connection with Van Gogh, as well as the Roman Ruins. As we walked up the streets, we first came to Les Arenes (the Roman Amphitheater), then walked up around the corner to the Theatre Antique. Both were still in use, and had been set up for Bastille Day celebrations.

Next walked to Espace Van-Gogh, a sixteenth century hospital. It's major claim to fame is that it was where Van Gogh was committed after the infamous episode of cutting off his left ear in December 1888. As we walked there, our guide pointed out a bakery that she claimed had the best olive bread she had ever had. We walked back to bought some bread, and admired the shelves of baked goods. We sat in the Place de la Republique. We rejoined our group, then walked back through town and stopped at a sidewalk café, where Van Gogh had painted his famous “Café at Night”, then went around the corner to Church of St Trophime. Our ship left the dock around 6:00pm, and headed back up to Avignon. We watched from the upper deck, as we went through a lock in the river.

The next day, my wife chose to join a group and visit the Pont du Gard Aqueduct, the world’s tallest Roman bridge. I walked across the street from our ship, and joined a tour of the walled city of Avignon. The city was conducting their yearly City Festival, with hundreds or shows and performances being done. The city was very crowded. We walked the cobblestone streets and made our way to the Palace of the Popes, but I had to leave the tour early to get back to the ship for a specialized tour of Chateauneuf-du-Pape. At 11:30, Met our Sommelier and tour guide, Kelly McAuliffe. Lunch at La Table de Sorgues, for wine tasting and lunch. I will go into detail more on the lunch in another blog about the foods of France, but it was an extraordinary two-hour French lunch.

After lunch, we headed to La Clos du Caillou. Founded in 1895. It is the one blank spot in the Chateauneuf-de-Pape AVA map. This was then followed by a tasting at Domain de la Janasse, where we met with Isabelle Sabon. Again, I will follow up with an entire blog post about the trip to Chateauneuf-de-Pape, as it is a fascinating region.

We arrived back to the ship at 6:00, and the ship left right after we boarded for the little town of Viviers. Some may recognize this medieval town from the film “Chocolat”.

In the morning, we met our guide, a local who was a refugee of Vietnam. We walked down the tree lined streets, where she pointed out the high-water marks from when the Rhone flooded the town. The town only has about 4,000, and is a fully intact medieval town. As we learned, they are working to restore the town, and re-invent it as a stopping point for cyclists, ride from the Alps down the Rhone to the French Coast.


We arrived at the town square with our first look at the rock, where the 12th century St. Vincent’s Cathedral is built. The original church was built in 475 AD, but all that remains are the walls atop the rock. We wound our way through the narrow streets, eventually making it to the top of the rock, where the entrance was a gated wall only open to the clergy. They lived above all the towns people below. We entered the church and listened to a local organist play about five songs on the large pipe organ. We were also told about the missing tapestries in the church, Apparently, they were stolen, and all but one was recovered. Three were still out for restoration and cleaning. We walked out to the site of the original church (the top of the rock) that overlooked the city. In the distance you could follow the Rhone river upstream, with views of the nuclear power plants in the distance.

As we worked our way back down into town, our guide took us to her house, and invited us in. Her house was actually two houses put together as one. Her husband was there, and they allowed us to wander throughout the house, as they offered us cheese, and wine.
At the end of the tour we watched both the locals and some shipmates play Pétanque. It is basically a French version of Bocce Ball. Instead of rolling the balls (like in Bocce) the balls are tossed in a backhanded motion, and the balls are made of steel, and slightly smaller than bocce balls. Other than that, the rules seem similar.

As the ship moved up river, we transitioned from the Southern Rhone wine region to the Northern Rhone Region passing the small hillside vineyards of St. Peray located at the top of a hill. All terraced with a western exposure. Further up river, the larger terraced, hillside slopes of Cornas came into view.

We arrived at Tain L’Hermitage around 9:00pm, with our first views of the famous hill of Hermitage and the St. Joseph Vineyards. There were a lot of white swans on the river. The rivers are pretty dirty, and most people don’t go in. Also, the current is pretty treacherous.

Check out the second part of our Rhone River Cruise, the Northern Rhone and Soane, by following this link.