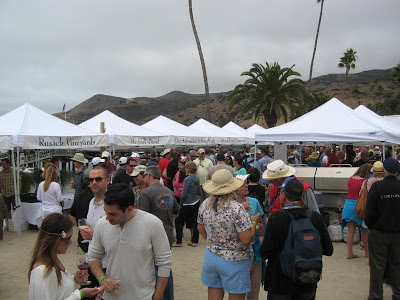 “Twenty- six miles across the sea


Santa Catalina is a-waitin' for me

Those of you in Southern California know what I’m talking about, when I quote this old song from 1958. This last weekend it was a 26 mile trek across the channel to Two Harbors on Catalina Island for the 12th Annual Summer Wine Festival. 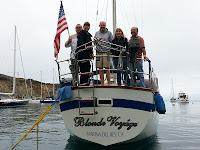 A friend of mine owns a 42 foot Irwin Sailboat (the Blonde Voyage), and invited us to join her for a 3-day trip to Catalina Island, and a little wine tasting. Well….wine tasting, beer tasting, food, sea, and sun to be more accurate. We left Long Beach’s Alamitos Bay on Friday morning. Before even hitting the breakwater, we each opened a bottle of beer, made a toast to Neptune (and Poseidon) for a safe voyage across the channel. Each person took a drink, and then we poured the remaining portion in to the ocean. The seas were calm, and we motored for the first three hours. We caught some wind, and sailed the last 1 ½ hours into Cherry Cove on Catalina Island. Upon reaching our mooring, we once again toasted Neptune with cranberry martinis. 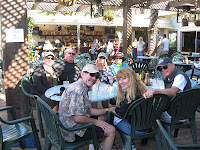 We headed to shore to pick up our friends dingy, and had to stop at the bar to try two local specialty drinks. The first was called a “Gatorade shot”. While I see no similarity to the thirst quencher, we did learn that before you down the shot, you must say “waka waka”. This was soon followed by the island special, known as a “Buffalo Milk”. It was more of a dessert drink, with whipped cream and grated nutmeg on top, along with a splash of liqueur de Cacao. Dinner was on the boat the first night, and grilled filet mignon paired nicely with the Buscador Pinot Noir and the Ancient Peaks Oyster Ridge. As the sun set, we looked forward to Saturday’s wine tasting event. 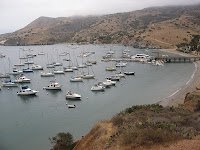 The Two Harbors Wine Festival is sponsored by the AvalonRotary Club and the Santa Catalina Island Company, as a fundraising event for local community programs. Tickets went on sale in May, and by the time the line had formed to get into the event, there was a long waiting list for tickets. All 500 tickets had been sold, prior to the event day. 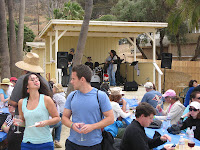 Included in the $40 admission were live music, and all you could eat appetizers of cheese, cracker, meatballs, shrimp, ceviche and fruit, provided by the Harbor Reef Restaurant. In addition, Mad Mikes Gourmet Sausages were there from Temecula. They took groups of six people, and tasted samples of their sausages. I must admit that their bratwurst is one of the best I’ve had….just melted in your mouth. I just wish I had some Riesling to go along with it! A silent auction with Catalina items appealed to a lot of the crowd, who kept returning to their favorite item, to make sure they weren’t out bid. 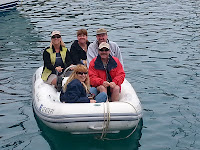 Of course, for us, we were there to taste wine. The event is aimed at appealing to every type of palate. There were fizzy Muscats, to deep dark Petit Sirahs. Most of the booths were represented by distributors or friends of the winery. Only in a few cases did I talk with anyone who knew a lot about the wines being served.  I was only able to get to about 20 tastes in the three hours of the event. Out of those wines tasted, I came across one bottle that was tainted (volatile acidity). Some of my favorites for the tasting were the Greywacke Sauvignon Blanc from New Zealand, and very yeasty Iron Horse Ocean Reserve Sparkling wine, and my favorite of the day was the Don Sebastiani B-side Cabernet Sauvignon. For about $25, you can’t beat this Napa Cab, with its’ dusty tannins, black fruit and chocolate. 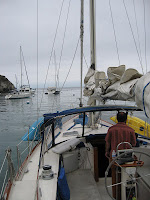 After the event, we hit the bar to “cleanse our palates” with a margarita, then off to dinner at the only restaurant on the isthmus, TheHarbor Reef Restaurant. Calamari steaks paired with a Santa Ynez Sauvignon Blanc ended our time on the island, and it was back to the boat for a final glass of Dragonette Cellars Rose, and a toast to the sunset, good friends and a great trip.

Sunday morning came too fast, and we needed to pack up everything for the boat trip back to the mainland. The winds remained calm, and we made our voyage toast to Neptune with some homemade Bloody Mary’s. About three hours out, we came upon a pod of dolphins, and followed them for a while, before returning to Long Beach, and a return to reality. 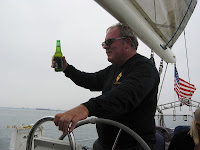 Next year, plan on scheduling your trip to Two Harbors for the annual Wine Festival. The event is aimed at appealing to every connoisseur’s palate, the festival has become one of the “must do events” while visiting Catalina.
Posted by The Sommelier: