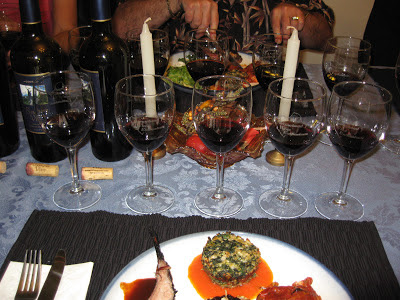 Not too long ago, I shared a Cabernet Sauvignon Vertical tasting that a group of us had done. Well, it was time to try that again. I am always experimenting with food and wine, and the vertical tasting format is a great way to try one vintner's wines, and see how they change with the different vintages, while pairing them with different types of food.

This time around, I was able to pick up a five year vertical of Sempre Vive Cabernet Sauvignon (2002-2006). I must admit that I wasn't familiar with this winery, prior to our tasting. So, a little research, and I found that their Cabernet comes from vines planted in 1971. What was intriguing was that they use their own Cabernet clone, known as the "Albie Romeo Old Vine Clone". The vineyards are located on the north end of Napa Valley in Calistoga. 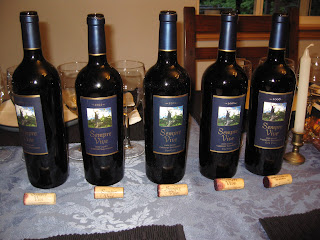 Vintages were also involved in my decision to purchase the wines. The 2002 vintage was a strong one, with long hang time, producing concentrated fruit flavors and intense color. The 2003 vintage was an uneven growing season, producing mixed results. 2004 was an early harvest season, but it was also an early budding season, so hang time was normal. The crop was smaller than normal, but led to nice fruit. The summer of 2005 was very cool, and the grapes struggled to ripen, until a late summer heat wave hit, producing a larger than normal harvest. The final vintage, 2006,  was another uneven growing season, with harvest time rain (which can dilute the juice). Each vintage offered its' own challenges, so I thought this might be a great vertical to see the affects on the final product. 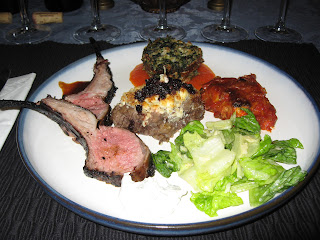 Each couple was to bring some type of food to pair with the five wines. The first course was an Eggplant Involtini with an Italian tomato sauce. Second course was a Spinach and Walnut cake in Red Pepper sauce. The main courses were Blue Cheese Crusted Filet Mignon with Port Wine Sauce and caesar salad, and Grilled rack of Lamb with a choice of dipping sauces: mint chimichuri, pasilla chile with garlic, and yogurt with rosemary and thyme. For me, the classic pairing of lamb with Cabernet Sauvignon was outstanding. All the entrees worked, but I would change the spinach and walnut cakes a bit. They were a bit too vegetal in flavor...next time maybe a more bitter vegetable.

In front of each place setting were five glasses, which immediately filled with each vintage (from left to right). As the wine opened up, the dinner was prepared, and served. On first taste, all the vintages were pretty much the same. We expected variation, and that didn't seem to exist. After about half an hour, the differences started to show. 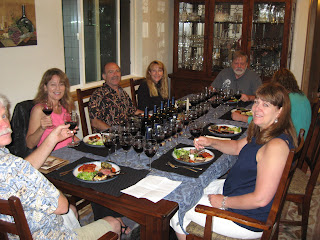 2002 - Medium intensity with a remarkable amount of black fruit of plum, blackberry and black cherry. Some age showing, with a touch of tobacco, leather, spice. Nice complexity, moderate tannins and a long satisfying finish.

2003 -  More fruit forward than the 2002. A bit watered down but dry with full body of cassis,  spices. Moderate tannins, and a fading finish.

2004 -  Medium + body and moderate tannins. Lots of berry flavors, cassis and chocolate. A slight spiciness that reminded me of a low alcohol Zinfandel. and a bit of cherry on the finish.

2005 -  Medium bodied. Was okay but has some of that green bell pepper aroma that can be picked up in Cabernet, along with a bit of black cherry and plum. This one had the most notable oak influence. The finish was a bit short.

2006 - Medium + body with full flavors of black cherry, plum, and cassis and a touch of spice.  Nice acidity and moderate, smooth tannins.  The fruity finish was long and would would hold on to this vintage a while longer.. 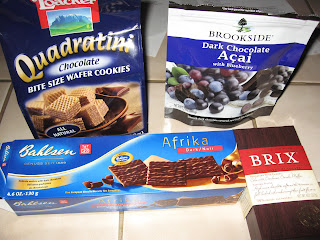