Last week, I told you about a wine tasting we conducted, and the two “best buy” wines of the evening: a Mexican Nebbiolo, and a Spanish Albariño. To my surprise, a lot of the people at the tasting were unfamiliar with Albariño, so I thought I might take some time, and do a short information piece on this up and coming wine variety. 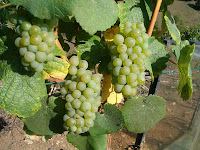 Albariño is a green, thick-skinned grape variety. It was presumably brought to Iberia (now Spain) by Cistercian monks in the 12th century. The monks were centered at Cluny, in the Burgundy region of France. But, its name "Alba-Riño" means "the white from the Rhine", which could indicate that it traveled a bit, before settling down in the Rίas Baixas region (Galicia) of Spain. Albariño accounts for 90% of all plantings in Rías Baixas. I should point out the DNA research has been inconclusive as to the origin of the grape.

It is also common in the Vinho Verde region of Portugal, where it is known as Alvariñho. Vinho Verde translates to “green wine”, but in this case, the “green” is referring to youth.  The wines are blends (Alvariñho along with Loureiro and Trajadura), which are commonly bottled with a bit of carbon dioxide remaining trapped in the bottle, producing a light spritz on the palate.

The thick-skinned grape resists fungal disease, which is prevalent in the damp climates of Rίas Baixas and Vinho Verde. Albariño is a low yielding grape variety and expensive to cultivate. Most often it is fermented in stainless steel, to preserve the fruit and floral flavors and retain the sharp acidity. But, it also responds well to malolactic fermentation and barrel fermentation and maturation, creating complex wines with some aging ability.

The grape is noted for its distinctive aroma, due to its thick skin. The closest grapes to associate with would be cross between Viognier, Pinot Grigio and Gewurztraminer. On the nose and palate, you’ll find apple, pear, apricot, peach and citrus, along with floral notes of jasmine or acacia. When grown in highly acidic, granite soil, Albariño produces a more minerally wine. On the other hand, sandy soil gives the wine a softer, more rounded profile. In general, the wine produced is unusually dry, light, and high in acid with moderate alcohol levels.  Its thick skins and large number of pips (seeds) can cause some residual bitterness.

Outside of Spain and Portugal, there are small plantings of Albariño in Australia (where, for a long time, what was called Albariño, was actually Savagnin Blanc) and the United States (particularly California, Oregon and Washington).

These wines are made to be consumed young (usually within the first year after bottling) and go nicely with many appetizers, poultry, seafood and shellfish. The classic Mediterranean food pairing is pulpo ala Gallego (boiled octupus with sea water, potatoes, and pimenton). It is also one of those wines that works well with spicy food, so next time you are eating Cajun or Szechuan…look for a bottle of Albariño. It’s a variety that is growing in popularity, not only because of its great taste and food friendly nature, but because the wines are great values (usually under $20).
Posted by The Sommelier: