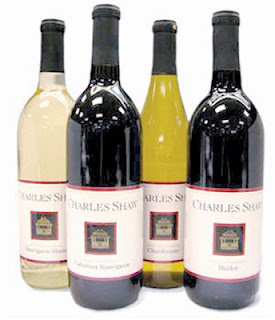 I guess it is time that I finally throw my opinion into the fray….This week, there has been a big “to-do” about the price of Charles Shaw wine (known in California as “Two-Buck-Chuck”) going above the $2.00 mark at retail. So many people have complained that this is the end of affordable wine. Really? Is it that great of a value?

At the risk of sounding like a wine snob…it’s not that good of a wine. I use it for making pizza sauce, not for drinking. Again, before you go calling me a wine snob, I have thrown bottles of Charles Shaw into a number of blind tastings, and in every case, it was picked as the worst, or cheapest in the bunch.  Again, that was a blind tasting.

For those of you who are not familiar with Two-buck-Chuck, it is sold exclusively through Trader Joe’s stores. The wine comes in about six or seven different varieties. The wine is made by the Bronco Wine Company, whose president is Fred Franzia. You remember Franzia wine don’t you? The stuff that comes in boxes (in fairness, the box wine is no longer associated with the Franzia family, as they sold the business long before Bronco Wine Company was formed). So, who is Charles Shaw?

There actually is a Charles Shaw, however he is not involved in the current wine that bears his name. Charles Shaw was an investment banker, who started a winery in Napa in the 1970’s. In 1991, he sold the brand to Fred Franzia. Charles Shaw now operates a winery in Michigan, known as OertherVineyard.

Back to Fred Franzia, and the Bronco Wine Company. Fred Franzia is the nephew of  Ernest Gallo (think Ernest & Julio Gallo). Fred started the Bronco Wine Company with his brother Joseph, and cousin, John in 1973. Bronco owns vineyards throughout the central valley of California. Land under vine exceeds 40,000 acres. According to their website, they have over 60 domestic wine brands, and over 70 international wine labels. Some of the more familiar would be: Crane Lake, Salmon Creek, Rabbit Ridge, Rancho Sisquoc, Rusack Vineyards, and Red Truck. Bronco Wine Company is the fourth largest wine seller in the United States, behind E. & J. Gallo, Constellation Brands, and the Wine Group Inc.

The question arises, “how can they make wine so inexpensively?” Fred Franzia has been quoted as saying that the other guys just overcharge (to paraphrase). Since Bronco Wine Company doesn’t share much information about their winemaking, one can only assume how they cut corners to keep costs down. 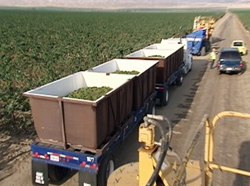 First, their vineyards are located in the central valley of California, an area known for bulk wine production and table grapes. This is a hot area, and the soils are very fertile. Most fine wine is grown in areas “on the edge”, that is poor soils, and stressful climatic conditions, which stress the vines, and are thought to produce finer fruit. The "terrior" makes a difference. Secondly, most of the high end wineries are hand picking their grapes, making sure the fruit is ripe, and handled gently. Bronco vineyards are mechanically picked, which is a violent process, where the grapes a shaken off the vine, along with everything else buried in the vine. There is a term for this,,,MOG (Material Other than Grapes)

The central valley is typically pretty hot, which means the grapes should produce higher amounts of sugar, which ultimately means more alcohol, and less acid. My guess is that most of the wines are acidified. I would also guess that most of the wine does not see oak barrels, but instead get dosages of oak wood chips, in a process similar to dipping a tea bag into water.

Even the bottles on Charles Shaw wine are of lower quality. I know this doesn’t affect the taste of the wine, but it does keep costs down. The corks are shorter than normal corks, and appear to be made of composite cork (pressed cork particles).

So, can you produce a quality wine, and sell it for under $3.00? Well obviously, you can produce a wine, whether it is quality is to be determined by the wine drinker. If you like Charles Shaw, great! My hope is that if this opens a door to wine for you, that you will explore further, and see what a $20 or $40 bottle of wine tastes like. To me, there is a difference. 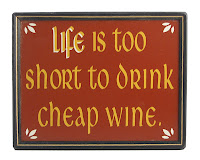