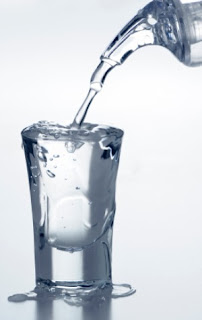 Thursday was Thanksgiving here in the United States. A time for families to gather together, and give thanks for all our blessings, as well as a time to celebrate the coming holiday season. This year, we had the normal family gathering. I brought a couple bottles of wine for the dinner (a California Rose, and a French Regnie) My brother-in-law brought a bottle of Cîroc Vodka, that was a hit with all the "twenty-somethings" in the family.

I wasn't familiar with Ciroc (not a big spirits drinker to begin with), so I started reading the label. This was a berry flavored vodka, but it was made from grapes. In particular, the grapes were Ugni Blanc and Mauzac Blanc. I am very familiar with Ugni Blanc, as the main grape in Cognac production, and it just so happens that last week, I was discussing wine production in Gaillac, France, and one of their grapes is the Mauzac Blanc.

The question arose..."How can this be a vodka, if it is made from grapes? Aren't vodkas made from potatoes?". The other thought was, why isn't this a brandy, since it is made from distilled grapes. So let's take a look at what the definition of vodka is.

Vodka is a beverage made from water and ethanol alcohol. The alcohol is the result of distillation of fermented grain, fruit, potatoes, or basically, anything that has sugar, or starch that can be converted to sugar. The standard process is distillation, and possibly filtration to produce as clean and flavorless a product as possible. The repeated distillation will continue to increase the amount of alcohol, to as high a level as 96% abv (alcohol by volume). The final distillation is then cut with water, to produce a lower alcohol level (usually around 40%), and any potential flavors are added to the final product. In Europe, the minimum alcohol level is 37.5% for vodka (65 proof). In the United States, the minimum is 30% abv (or 60 proof). Since the goal of vodka is to produce a clean, clear product, it is not aged.

Compare that to Cognac (see my blog on Cognac). Cognac can only be produced in the Cognac region of France. It is strictly regulated. it is distilled twice, then aged for a minimum of 30 months in oak barrels. 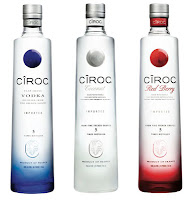 The Cîroc brand of Vodka is actually distilled 5 times, so you end up with a purer product, and again, no oak aging. So, Cîroc does pass the test, for the current definition of a vodka, but not the definition of a Cognac, or even a brandy. However, the European Union has begun talks concerning the definition of vodka The traditional vodka producing countries are insisting that only spirits produced from grains, potato and sugar beets be allowed to be labeled as "vodka", and must follow the traditional methods of production.

So, as of today, Cîroc is a vodka, but we'll have to see if that stands.

Cîroc is available in four flavors: Snap Frost, Berry, Coconut and Peach. It is marketed as an "ultra-premium" vodka, and distributed by Diageo, the worlds largest spirits producer.