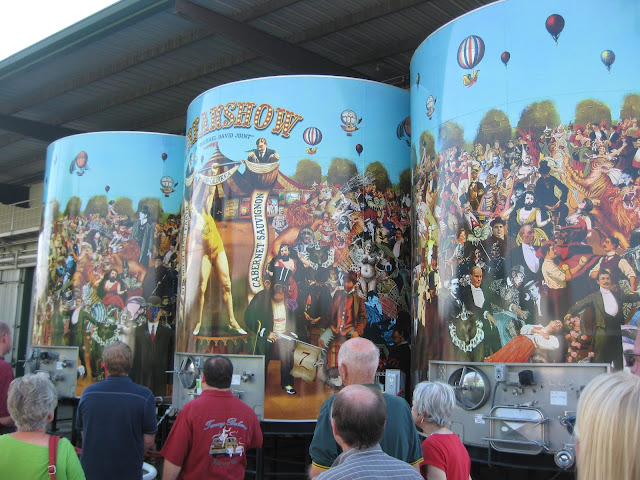 We hit the road at 6:00am, in an effort to avoid the typical Southern California commuter traffic. While we still got stuck in some traffic, we were soon out of the urban area, and headed up Hwy 5 and eventually Hwy 99. For those of you not familiar with California, these interstates run through the center of California, and one of the largest agricultural areas in the country. We were headed to Lodi. Most of you will automatically start singing the Creedence Clearwater Revival  song in your head at this point, “I set out on the road/ Seekin' my fame and fortune / Lookin' for a pot of gold / Thing got bad and things got worse / I guess you know the tune / Oh Lord, stuck in Lodi again.” 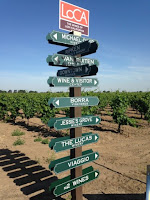 When I moved from Northern California, Lodi was this little farming town that we drove through on our way to the Sierras. My how things have changed!  Lodi has always been a farming town, and grape growing dates back to the 1800’s. The California goldrush hit the mountain communities in 1849, and the demand for wine switched from Southern California, to Northern California. Vines were planted in the Lodi area as early as 1850, but it wasn’t until the late 1800’s that the area started to take off. The most popular grape varieties planted were Zinfandel and Tokay.

Fast forward to 1986, and the region was established as the Lodi AVA. It was recognized for the Mediterranean climate with warm days and cool nights. The delta breezes, coming off the San Francisco Bay, create a natural air conditioning. The alluvial soils are sandy, mixed with granite, due to ancient river flows from the Sierra Nevada mountain range. In some areas, the soil is so sandy, that the vines are not grafted on to protective root stock (to avoid phylloxera).

Before we had left, many people joked about taking a 4-day vacation to Lodi, and I half wondered myself, if this was a mistake. This wine tasting weekend came at the recommendation of David Phillips, one of the brothers/owners at Michael David Winery. We had met at a wine pairing dinner a couple years back, and he had encouraged me to take our wine club up to the area. At his recommendation, we booked rooms at the Wine & Roses Hotel. To say we were pleasantly surprised with the accommodations would be an understatement. The hotel is an oasis in the middle of farm country. Large trees, and buildings covered with climbing ivy are just part of the charm. Each room has a fireplace, and very nicely furnished. Two weddings were taking place on the weekend we were there, and the grounds are perfect for such events. 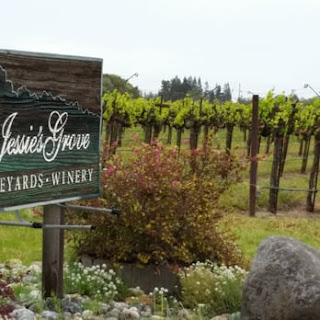 On this wine trip, I had arranged for 22 people to attend. Everything is focused on our Saturday tasting trip, but I also schedule some type of event on Friday. This Friday, we were scheduled to do a tasting at Michael David Winery, at 3:30. Since my wife and I arrived early, we headed out to a winery just down the street from the hotel, named Jessie’s Grove. I chose this winery because it is one of the oldest in the area, and claims to have some of the oldest vines still producing grapes.

Jessie’s Grove has 265 acres of vineyards planted.  Of these, the oldest vines are Zinfandel and Cinsault. The Zinfandel, Carignane and Tokay vines date back to 1889, and the oldest vines are Cinsault, planted in 1886. Only a small portion of the harvest is used for estate wines. Much is sold off to other wineries in the area.

The tasting room is located in what appears to be an old farm building. Around the tasting room are numerous photos and memorabilia showing the history of the property. Wine tasting fees are only $5, and between the two of us, we tasted most everything on the tasting sheet. We came here for the Zinfandel, and that is what we bought. Unfortunately, the oldest vine Zinfandel was sold out already, mostly to club members. We did also pick up the old vine Cinsault. All the wines were fruit forward, and deep, reflecting the vines effort to produce limited grape clusters. The production is small, maybe only 6,000 cases, but this historic property is worth a visit.

From the tiny historic property, we left to meet up with the rest of our wine tasting group at Michael David Winery. When I lived in the Bay Area, and drove through Lodi on Hwy 12, The Phillips Fruit stand was along side the road. Now the fruit stand is still there, but behind it is the large production winery.  Michael David Winery produces over 800,000 cases of wine. 300,000 of that is Zinfandel. They are the largest Zinfandel producer in the world.

Dave Phillips met our group on the outdoor patio, and took us on a tour of the facility. We started at the colorful “freak show” fermentation tanks, and continued on to the destemmer and presses, tasting freshly pressed juice, as well as fermented juice still in the fermenter. Dave was a great host, and allowed us to taste anything we wanted in the tasting room. Something has to be said here…in many instances, I find that the larger producers lose touch with the quality of their wines. Not at Michael David. They produce consistent quality, even with high production numbers. Their tasting staff is attentive, and you feel like this is a family operation, even with the behemoth size. Since many of the Michael David wines can be found in local retail outlets (including Costco), my purchases were focused on the higher end, and unusual wines. I purchased the Rage Zinfandel, and some of the Inkblot wines. Whatever you do, don’t skip this large producer, just because they are large. 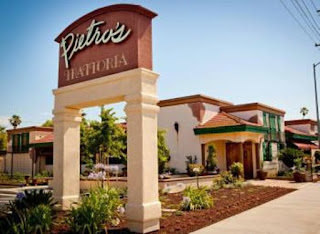 We had dinner planned at Pietro’s Trattoria, in Lodi. Dave Phillips suggested that we go with the family dinner. Great suggestion. We had eight people at our table, and had  two appetizers, salad, garlic bread (the best), pasta course, and main entrée, as well as two local wines (St Amant Barbera  and Bokisch Tempranillo). With tip and tax, the total bill was only $100/couple, and we had leftovers. The place was packed on a Friday night. The perfect end to our first day in the area.

Saturday would present us with another adventure. This day we would be heading up to the Sierra Foothills, and another AVA. Check out our trip to Calaveras County
Posted by The Sommelier: