A Trip to the Santa Cruz Mountains - Part 1 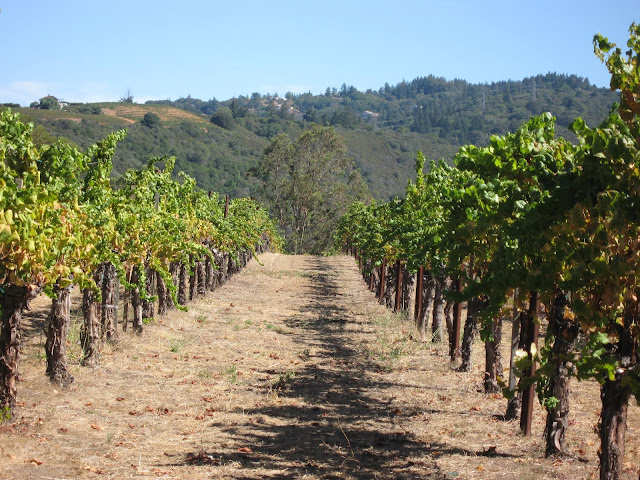 In my last blog, I introduced you to the Santa Cruz Mountains AVA, now it is time to visit the region. Every year, I take a group of people wine tasting somewhere along the Central Coast of California. This year the trip was to Santa Cruz, but we stayed in Monterey. The drive is about 6 ½ hours from Southern California, taking Interstate 5 up to Hwy 46, heading into Paso Robles, then up Hwy 101 to Monterey. 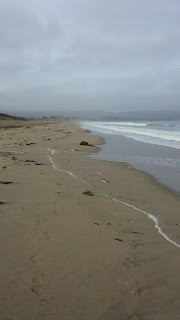 Since the drive “forced” us through Paso Robles, we made a quick stop at Barr Estates, to pick up a few bottles of their Petit Verdot, then a quick stop for lunch in San Miguel, at the Country Diner (recommend by Yelp, and a good choice). Before moving on to Monterey, we made another quick stop at San Marcos Creek Vineyard to pick up some Zinfandel, and the newest release of their club wine: “Fling’s First Crush”.

We arrived at the Monterey Beach Resort (now known as Unscripted Monterey). The hotel is the only one in Monterey that is located on the beach. As we found out, it is also very popular for weddings. We sat in the lobby, watching the surf, and keeping an eye on our arriving group of 24 people. Dinner that evening was at Restaurant 1833. The meal was probably the most adventurous dinner of our trip. The food combinations and eclectic menu choices made for a fun evening to kick off the weekend. I would definitely go here again.

Saturday morning was the day we were all waiting for…a trip to the Santa Cruz Mountains. I had hired Evan Oakes with Ag Venture tours to guide us to the four wineries on our wish list. We had used AgVenutures a few years back, and were impressed with Evan’s knowledge of the wine region and the local agriculture. This year was no exception. As we drove up Hwy 101, and later Hwy 85, towards Cupertino, Evan pointed out all the crops growing on either side of the highway. Soon we turned west and headed up the eastern side of the Santa Cruz Mountains. The roads became winding mountain roads only wide enough for 1 ½ cars (or a 24 person bus like ours). We shared the road with many cyclists out for their morning ride. About an hour and half after leaving Santa Cruz, we arrived at our first destination: the Monte Bello Vineyard for Ridge Vineyards.

Ridge Vineyards tasting room is located at an elevation of 2,600 feet, and overlooks the southern end of the San Francisco Bay. The Monte Bello Vineyard was originally planted in 1886 by Osea Perrone, and  is home to one of the most iconic Cabernet Sauvignons in California. It was the 1971 Ridge Cabernet that was entered into the “Judgement in Paris” competition in 1976. At that time, the wine placed 5th in the competition. At that time, the French complained that California wines might have beat them at that time, but California wines couldn’t age in the bottle. Thirty years later, the same wines were blind tasted again. This time, the 1971 Ridge Cabernet came in first!

During our visit to Ridge, we were lucky to have met with David Gates, the Vice President of Vineyard Operations, who works directly with Paul Draper, the renowned winemaker/owner of Ridge. David talked about the most recent harvest, and different vineyards. All this, while we tasted examples of their Chardonnay, Zinfandel, and Cabernet (including the famed Monte Bello). A bottle of their estate Chardonnay, and Monte Bello Cabernet, as well as a magnum of the Lytton Springs Zinfandel, now make a home in my wine cellar.

Our next stop was at Savannah-Chanelle Vineyards. When I scheduled these wineries, I simply looked for the historic wineries, and figured they were close enough to be able to hit quite a few. On the map, they are close together. In reality, getting around is no easy task. The roads are typically deadend roads that require you to retrace your drive, then head up another valley to the next location. The roads are mountainous, narrow, and often covered in fog.

Unlike Ridge, which overlooked the valley below, Savannah-Chanelle is tucked in a mountain valley, surrounded by heavy forest. The contrast of the vineyards and the pine trees makes for a stunning setting. The winery’s history goes back to 1901 and the establishment of the Pierre C. Pourroy Winery. Today, the historic vineyard house still stands at the top of the hill. It was here that we set out a large lunch spread, and enjoyed the views with bottles of wine and bottled water. The tasting room is located in a large wooden barn, and had three tasting bars. The place was packed with people (the most we saw on all our wine tastings). This may be because the winery is more accessible, being located just outside of Saratoga, and the Silicon Valley. 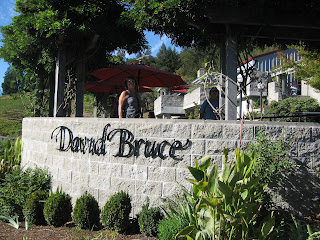 Our next stop had us heading over to the western side of the Santa Cruz Mountains, to another iconic winery, David Bruce. Dr. David Bruce, a dermatologist who had worked for Martin Ray and then helped crush Monte Bello grapes for Ridge in 1961, before founding his own winery in 1965. Bruce, a Burgundian by heart, took advantage of the cooler western slopes, and planted Pinot Noir and Chardonnay at the 2,200 foot elevation, overlooking the Monterey Bay.

Similar to Ridge, David Bruce was also included in the “Judgement in Paris”, but in the white wine category.  The 1973 David Bruce Chardonnay placed 10th in the tasting. While Chardonnay is still produced at the winery, the focus is certainly more on Pinot Noir. During our private tasting, we tried numerous wines, as well as different vintages. I left with a couple bottles of the 2008 Santa Cruz Mountain Pinot Noir (one signed by David Bruce).

Our final stop of the day was a pick from our guide. We headed back down the mountain towards Santa Cruz, and sat down on the outdoor benches of MJA Vineyards. We were heartily welcomed with “aloha”, and poured numerous wines. A solo guitarist played and sang in the patio. The winery produces two labels: Serene Cellars (Napa Valley) and Davine (Santa Cruz Mountains). Their main tasting room is located in Santa Cruz, and the location we went to is their mountain tasting room, surround by redwoods and pines. Back to the “aloha” welcome…the winemaker/owner also farms Kona coffee, and the laid back approach to tasting, and even serving chocolate covered coffee beans with the wine, made for a fun end of the day.

We left the hotel at 9:15 in the morning. Made it to four wineries, and returned to the hotel at 6:30. For anyone looking to go wine tasting in the Santa Cruz Mountains, I would suggest either staying in Santa Cruz or Silicon Valley. You’ll save yourself some drive time. For us, we like the restaurants in Monterey, and were willing to take a little extra drive time. Speaking of restaurant, our dinner on Saturday night was at one of the finest restaurants in the Monterey area: Passionfish. The focus is on fresh seafood and local produce. The focus is so strong on the food that the management has chosen to only do small markups on the wine. We found wines at half the price of other restaurants in the area. For foodies and win geeks, this was heaven.

In my next article, I will fill you in on the final two daysof our trip to Santa Cruz and Monterey.
Posted by The Sommelier: