Barrel Tasting with a Home Winemaker 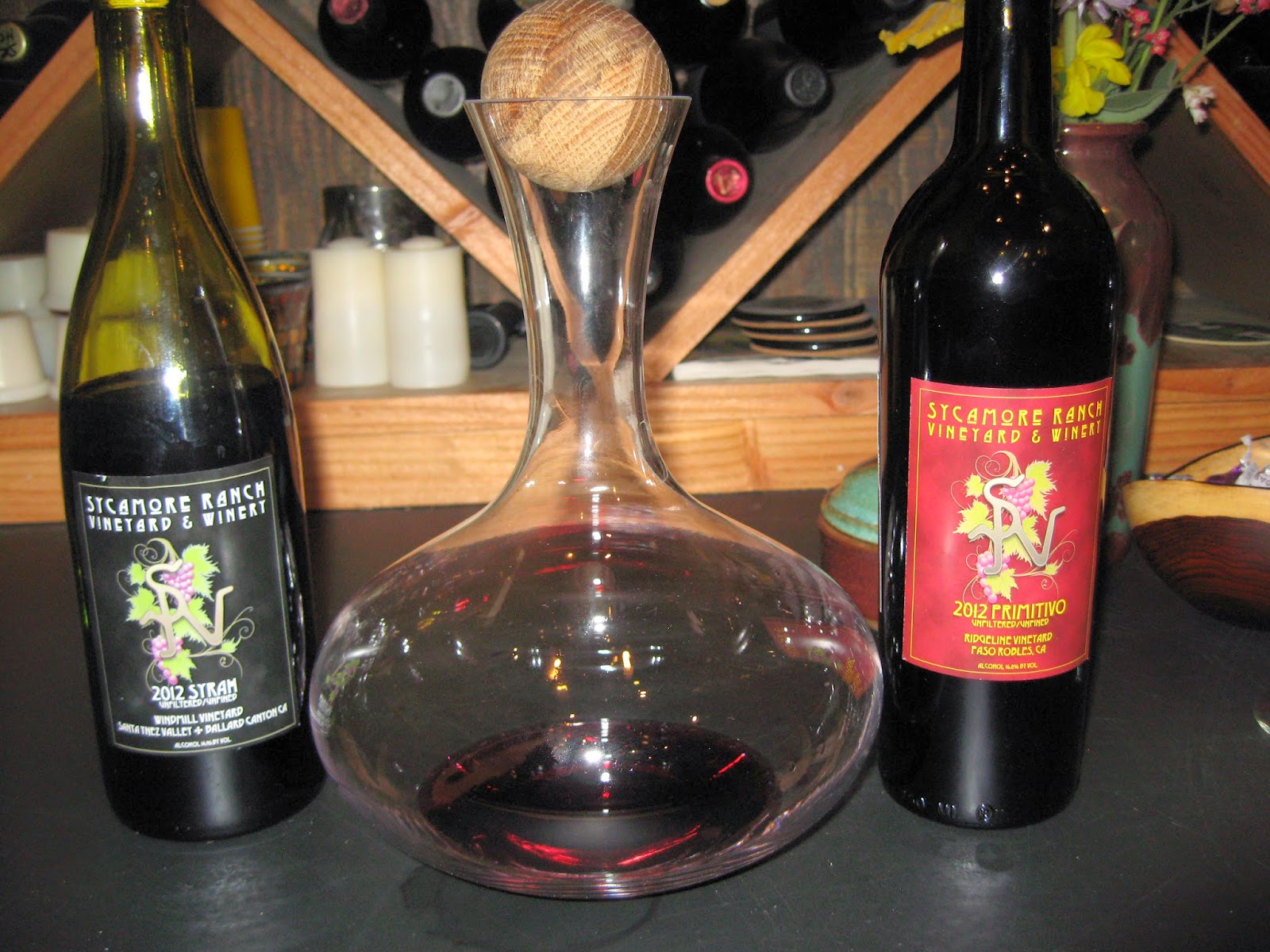 There is one thing about living in the mountains....there is always something new to discover. This week, matter of fact this day, offered two new experiences.

Earlier in the week, I received an e-mail from someone I have known for a while, but never really spent any time with. He had invited me to his home to try some of his homemade wine. For the last couple years, I had heard that he was growing grapes at his property. As far as I know, he is the only person in our mountain communities that is truly attempting to grow wine grapes in our area. The challenge is the altitude and short growing season. I didn't know what to expect, but really appreciated the invitation, and looked forward to see what our mountain could produce. 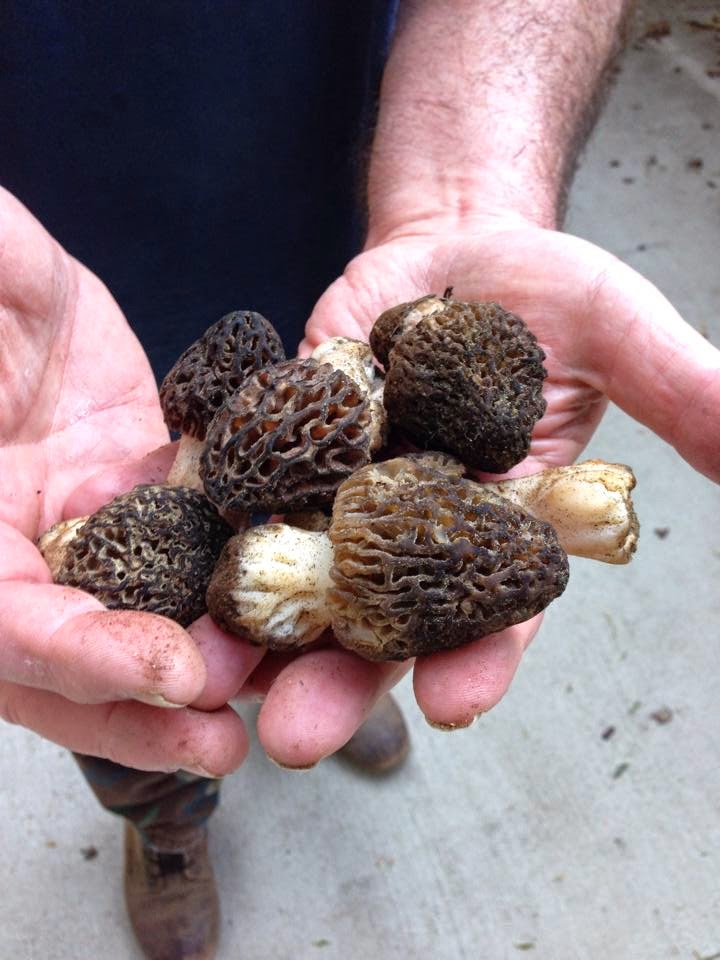 As our tasting date approached, another friend contacted me, wondering if I knew anyone who could identify wild mushrooms. He thought that he might have Morel mushrooms growing in his area. As it turns out, my business partner has been gathering wild mushrooms for years. I put them in touch, and decided to join them in the hunt. We found all types of mushrooms (some edible, and some poisonous). After about 1 1/2 hours, we had collected a large handful of Morels. I had to cut the hunting short, so I could get on to my next adventure of wine tasting some local wines. 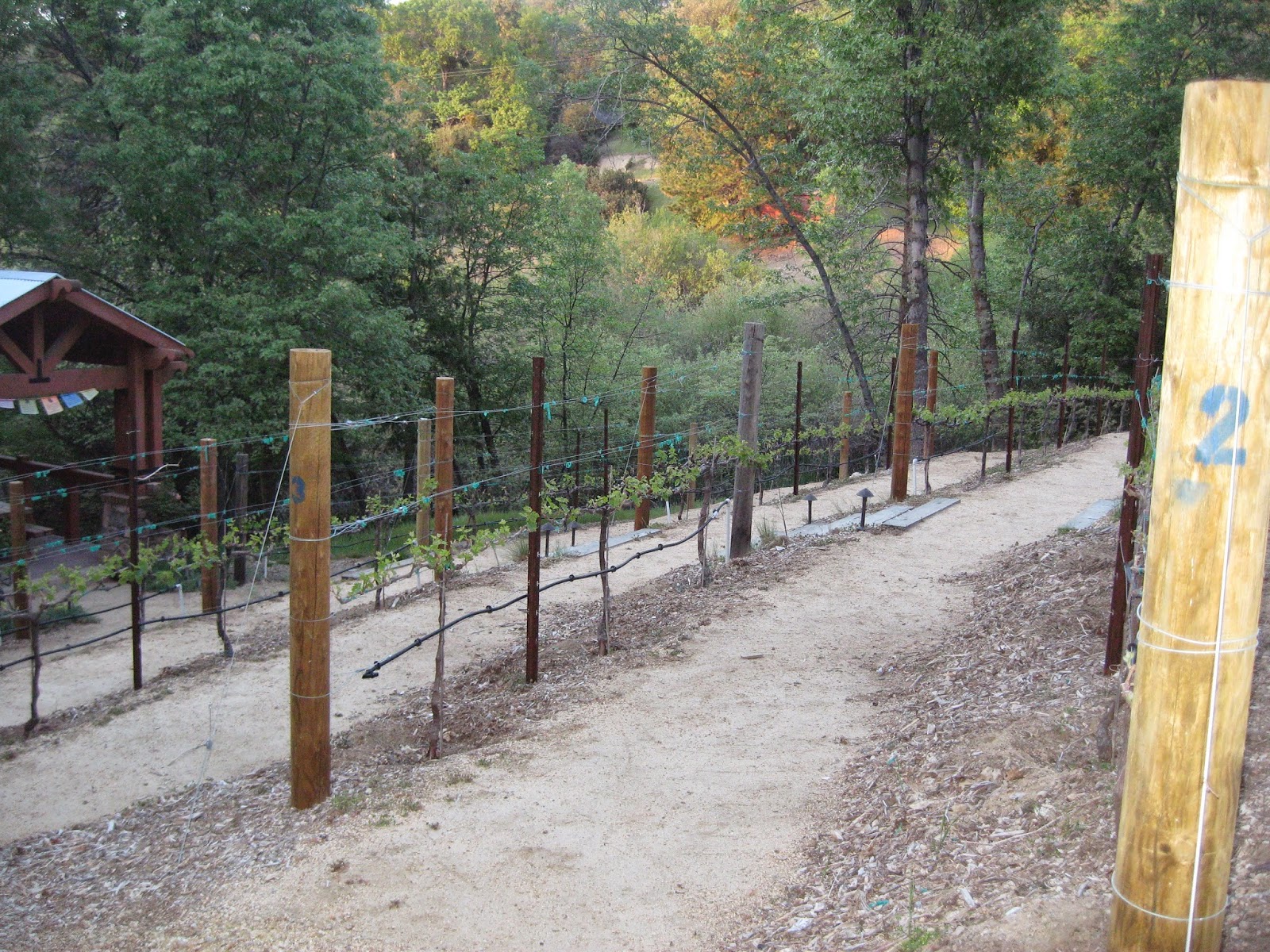 I quickly cleaned up, and headed to Dart Canyon, where we pulled in to the Krumwiede's driveway. Their two dogs greeted us and followed us out into the vineyard. They own 3.5 acres of gently sloped mountain land. About half of the property is landscaped, which is no surprise, as Richard is a landscape architect. On one end of the driveway is their house, with vineyards neatly pruned and trellised below. Around the vineyards were numerous apple trees. Richard and Elizabeth explained that prior to grapes, they grew apples, and produced apple cider. Now they have added Zinfandel and Syrah vines. Normally I have seen both of these grapes bush trained, but they chose to trellis their vines, figuring that this would allow more sun exposure. Bud break had occurred a couple weeks earlier, so everything was starting to green up. The entire setting reminded me of being somewhere in the Sierra foothills.

On the far end of their driveway is the "winery". We walked through what looks like a tasting room, then into a back room filled with barrels, and a long tasting table, that Elizabeth had set with an assortment of cheeses, fruits and nuts. On the back wall, there were racks of bottled wines. The south wall had a number of Hungarian oak barrels, each labelled with the vintage, ph, and grape. Richard grabbed the wine thief, and extracted wine from the first barrel, which contained a Mourvedre. The grapes had been sourced from someone named Raphael, who has vineyards in San Miguel (part of the Paso Robles AVA, in the California Central Coast). The wine was light in pigment, and had a pronounced cherry aroma.

Where the fun began, was with the local Zinfandels. This grape variety has a tendency to be all over the place in style, taste and aroma. It also reflects the terroir. We tried two different vintages of Zinfandel. One was spicy, and the other was jammy. The vines are still young (for Zinfandel) and truly reflect the vintage. We also tried Primitivo, Grenache, Cabernet Sauvignon, and Petit Sirah sourced from Sculpterra. The Syrah was sourced from Saarloos & Son's Windmill Vineyard in Ballard Canyon (the newest AVA in the California Central Coast). We did not try locally grown Syrah. The vines are only a few years old, and still developing. 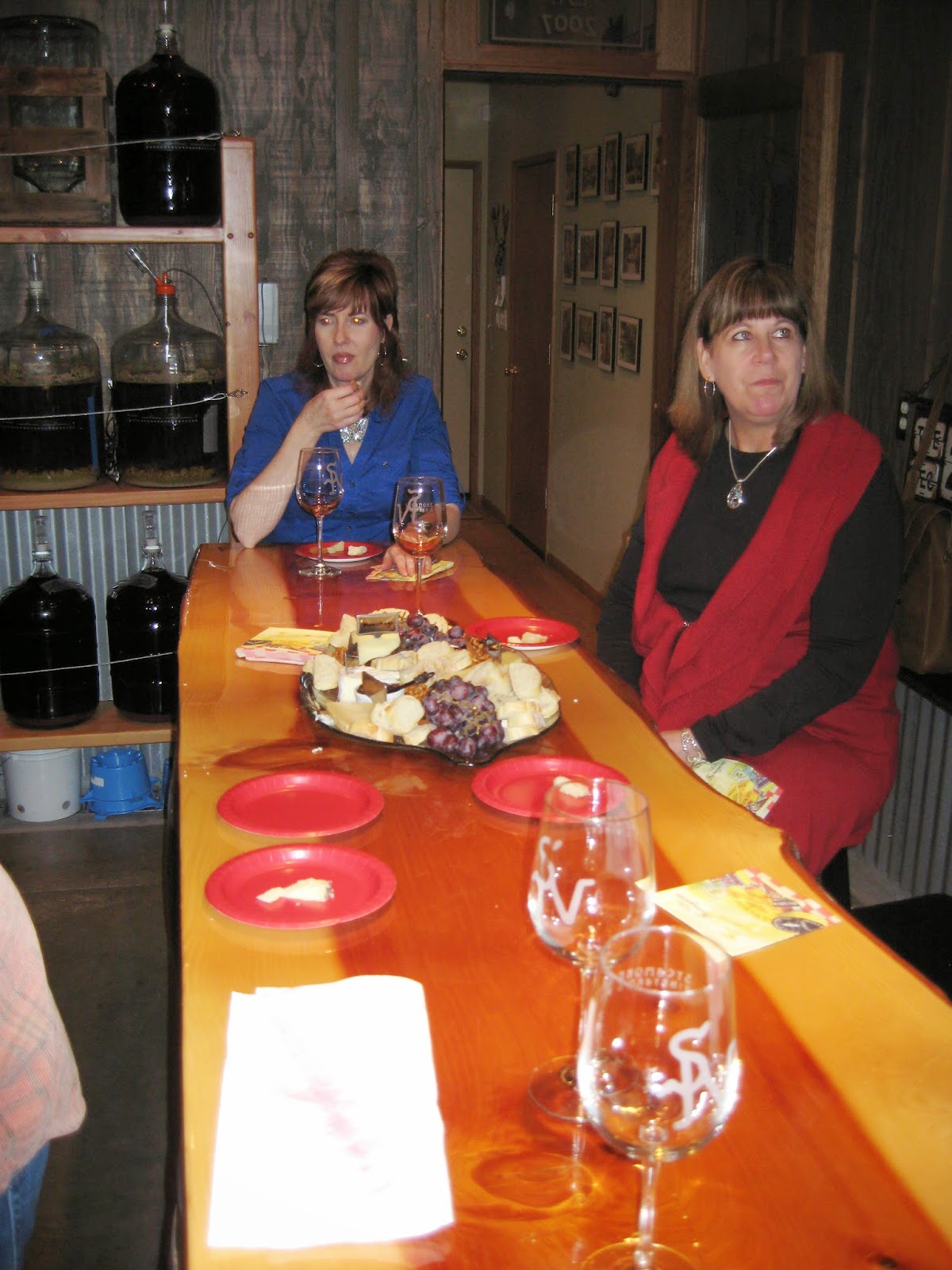 After barrel tasting each of the wines, we tried a little blending to see what might be possible. We really didn't do any serious blending, but tried a couple different variations, with differing quantities of barrel samples. Also joining us in the tasting was long-time friend, Tom Bachman. While he doesn't grow his own grapes, he has been making wine since I have known him. He shared a bottle of his Bordeaux-style blend of red wine. There was a pronounced rose perfume on his five-grape blend.

Currently, Sycamore Ranch and Vineyard is not available for sale. It is strictly shared with friends, and a co-op of family winemakers. But, that may change down the road. Richard and Elizabeth indicated that they may seek to have their winery bonded, and create the first Dart Canyon winery. Since there is no AVA in this area, the wines would have to be labelled as "California Wines". They already have a tasting room, and wine. Also watch for some of Elizabeth's artwork. 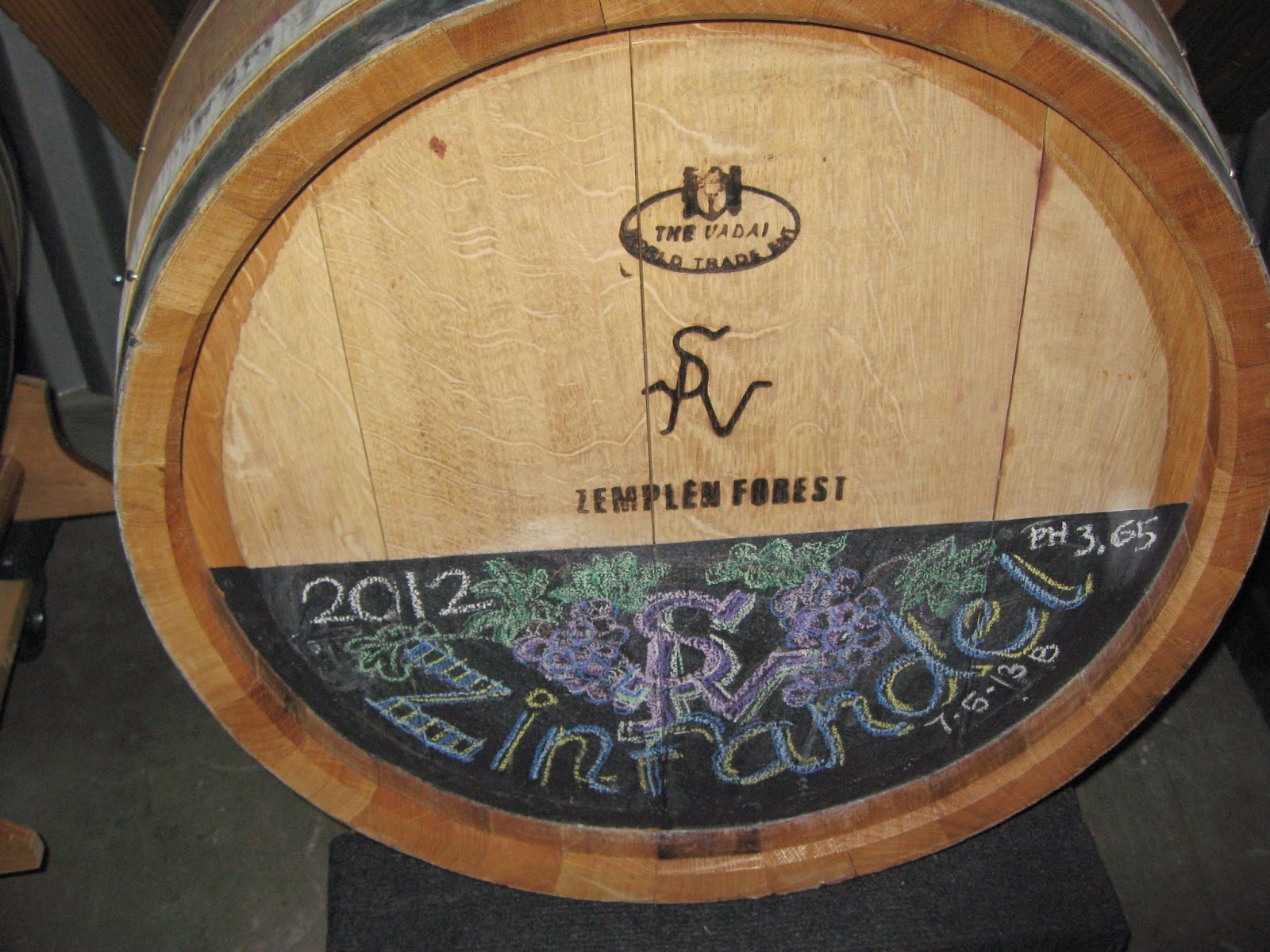 Our mountain community continues to surprise me...wild mushrooms, and local wine. Based on my tastings, I think there is a future for wines produced at elevation in Southern California, and the Krumweide's are leading the way. I didn't know what to expect from a home wine-making operation, but this felt like a "professional" wine tasting room.

What is happening in your backyard?
Posted by The Sommelier: