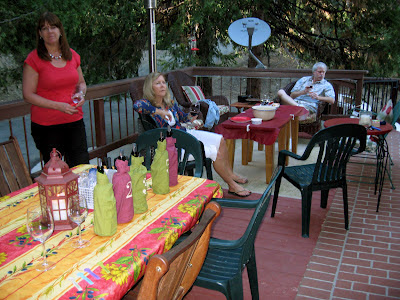 In the United States, the first weekend of September is a holiday weekend. Labor Day typically is considered the end of the summer season. A 3-day weekend to spend time with friends and family, have a barbecue, and prepare for the Fall season. What is better than barbecue and wine? 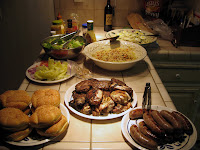 Like most of you, I too spent Monday with friends, and a barbecue. But, being the wine guy that I am, I added a little twist to our gathering. You see, I had just finished reading "Zin: The History and Mystery of Zinfandel" by David Darlington. While the book talks about a number of different Zinfandel producers, the "battle" for supremacy really came down to Ridge and Ravenswood. So, I thought it might be fun to see which one people thought was better. A blind tasting of Zinfandel, while eating foods off the grill would be the perfect taste test. 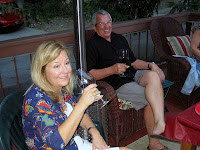 I purchased a bottle of the Ridge 2009 Lytton Springs and the Ravenswood 2008 Dickerson Zinfandel, then asked each guest to bring a bottle along with a side dish. We ended up with seven different Zinfandels (and actually only one duplicate bottle). All the bottles where put into tasting bags (except one, since I only had six bags). Each bag was numbered. Even I did not know what bottle was in which bag...though I had a clue to one bottle which showed up very cold, versus the others...a dead giveaway on which one it was.

In addition to the Ravenswood and Ridge, we had 7 Deadly Zins 2009, San Marcos Creek 2009 Estate Zinfandel, Tobin James 2008 Dusi Vineyard Zinfandel, Earthquake 2010 Zinfandel, and Adelaida  2008 Zinfandel (not included in the blind tasting, but opened up afterwords). 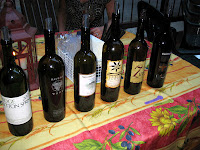 There was no particular order to the tasting, so everyone kept track of which wines they tried, and were able to go back and forth to narrow down which was their favorite. We actually did the blind tasting before ever getting to the barbecue (I guess my friends just want to get down to business when it comes to drinking wine).

I took note of the comments made on each wine.

Number one was considered very unusual, and did not taste anything like the others. It had some smokiness to it, and a bit of mocha on the nose. For drinking on its' own, this was the least favorite of the group. However, when paired with the barbecue later, this was the second favorite food wine. It turns out that this was the only wine that also had Petite Sirah, and Carignane blended in. The wine definitely improved once opened for a while. If you are to drink this one, open it early or even decant it. It is a big wine. This was the Ridge 2009 Lytton Springs from Sonoma.

Number two in the tasting had mixed reviews. There was a certain minerality to it that some liked and others did not. After being opened for a while there was a bit of raisin aroma that presented itself. The finish was considered very short. This was the Ravenswood 2008 Dickerson from Napa Valley

Number three was the overall favorite. It was lighter than all the rest, and had a bit of finesse to it. On the nose there was a slight vegetal aroma, but not enough to detract from the palate. Lots of fruit forward notes, and the alcohol seemed more balanced than most. The surprise was that this was the least known winery of the bunch...it was the San Marcos Creek 2009 Estate Zinfandel from just north of Paso Robles

Number four had a nice mix of spice and jamminess, that everyone liked. I picked up some candied fruit on the nose. The alcohol was a bit more prominent, but still fairly balanced. This was the Tobin James 2008 Dusi Vineyards from Paso Robles

Number five was very fruit forward and jammy, with just a touch of spice. The alcohol was fairly aggressive, and some didn't like the bitter finish. This was the 7 Deadly Zins 2009 from Lodi. 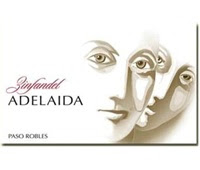 The last wine in the blind tasting (#6) was by far the fruitiest, most jammy of the bunch. (and by far the darkest in color). This wine had the most noticeable alcohol content, and as a sipping wine was the favorite of the group (however the San Marcos won for best with sipping and food). This was the Earthquake 2010 Zinfandel from Lodi.

Lastly, we had the Adelaida 2008 Zinfandel with dinner (as we had finished off all the other Zins, so I opened up some of my private stock). This was a well balanced wine with some spice and fruit. It was not nearly as heavy as the Earthquake Zin, but not as light as the San Marcos Creek. It went very well with the barbecue.

We ended the evening with some Ghiradelli Chocolate Brownies, so I thought a Zinfandel Port might be a good finish. As it turned out, I didn't have any in my cellar, so we settled on a St Clair Port (a unique blend of Cabernet and Muscat), from New Mexico. Presented in a 500 ml ceramic bottle and a porcelain cap, the wine worked great with the brownies, and presented a nice finish to the evening.

I must point out, that most of the tasters in this group like fruitier wines, and when it comes to Zinfandel, you can find fruity to spicy and everything in between. I tend to enjoy wines that work best with the foods I'm serving. Remember, taste and wine preference is personal, don't rely on someone else's tasting notes, unless you know that you like similar style wines.

So what is your favorite Zinfandel? Try a  blind tasting with your friends, and see how your favorite stacks up. You might be surprised.
Posted by The Sommelier: