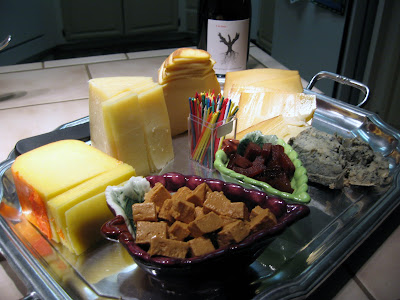 If ever there was a myth about wine, it is that it pairs great with cheese.

When was the last time you ever thought about adding a little wine to your milk? Doesn't sound too appetizing does it? So where did the idea of wine and cheese come from?  My guess is that local cheese producers wanted to take advantage of the regional wines that were being produced. I still believe that if you have a wine from an area that produces cheese, try that cheese with the wine (they come from similar terroir).

Wine and Cheese pairings are one of those "tricky" things to work with. Check my series of articles about wine pairing at Wine Pairing Part One, Part Two, Part Three, and Part Four.

There are so many cheeses, there is no way to cover them all, but let's consider the types of cheeses. There are fresh, soft, semi-soft, hard, and blue cheeses. On top of that, cheese can be made from cow's, goat's, or sheep's milk - each imparting different flavor profiles.

In general, when pairing cheese with wine, think the lighter/ fresher the cheese.. go with crisp, fruitier wine.

Semi soft cheeses move up in weight, as well as mouth coating creaminess, so think acid, but with weight and fruit (this can range from a fruity Sauvignon Blanc to a full bodied Pinot Noir, and everything in between).

Hard cheeses tend to be aged longer, and have more distinct flavors. A "rule" to follow here would be, "the stronger the flavor, the bigger the wine" (Merlot to Zinfandel and Cabernet Sauvignon). 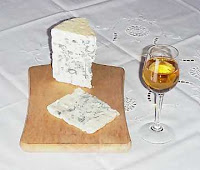 Among the cheeses often associated with red wine pairing are blues such as blue cheese and creamy cheeses such as Camembert. However, the creaminess of the cheese is drowned out by the dryness of the tannin in the reds.

Blue Cheese can range from mild to strong. Remember to match salt with sweet, so the salter the cheese, the sweeter the wine. Sweeter styles of white wine such as Sauternes pair best with blue cheese such as Roquefort, as the drink enhances its saltiness.

The acidity of German Riesling offers a nice contrast to the tangy nuttiness of a Parmigiano-reggiano, while the grassy, mineral flavors of French Sauvignon Blanc can also deliver beautiful flavors when paired with goats’ cheese. But the bolder, more tropical flavors of Sauvignon Blanc from New Zealand tend to be too strong for this effect.

Whites which have been “oaked”, left in oak barrels to absorb the wood’s flavor, should generally be avoided with cheese. Look for those fermented in stainless steel.

If you must pair a red wine with your cheese course, invest in an older wine, such as a traditional Rioja at least five years old, as time will have softened the tannins. But it will still need to be served with a strong cheese such as cheddar, or (my favorite) Manchego.

Port and Stilton are a classic pairing, but instead of the ruby ports, try a lighter tawny Port.

As mentioned, Sauterne with Roquefort is a classic wine and cheese pairing. You may want to even try a Brandy with cheese. We had experimented with Calvados (Apple Brandy) and found that it worked wonderfully with Camembert covered with sauteed onion and apple. 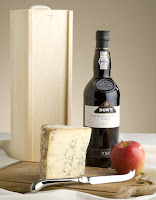 Remember that when you are pairing wine and cheese together, first taste the wine by itself. Next taste the cheese, and sip the wine with the cheese....wine, cheese, wine. Your cheeses should be arranged from mildest to strongest, to help keep your palate from being overloaded. Softer cheese before hard cheese, and cow's milk (the mildest) to Goat, then Sheep and finally Blue Cheeses. The cheese will influence the taste of the wine, more than the wine will influence the cheese. Don't "waste" your best bottle of wine with a cheese pairing.

Another little "trick" with your wine and cheese pairing, is to have some palate cleansers served with the cheese. Water crackers are a nice addition. I have also found that almond nugget and quince paste make a nice addition to a cheese plate.
Posted by The Sommelier: