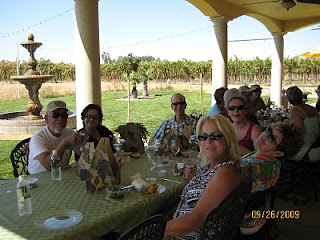 This weekend, I’ll be taking 28 people wine tasting in Paso Robles, so I thought it might be a good time to look at the area, and see what it’s all about.
Paso Robles (originally El Paso de Robles) is Spanish for “The Pass of the Oaks”. The area is located about halfway between Los Angeles and San Francisco in the wine region known as the "Central Coast". Called "Paso" by California locals, the city sits on the eastern side of the Santa Lucia Coastal Mountain Range, with elevations from 675 to 1,100 feet . The actual Paso Robles AVA (American Viticultural Area) has over 26,000 acres planted with over 40 wine grape varieties. Grapes were first introduced into the area in 1797 by missionaries at Mission San Miguel Arcangel, However, commercial wine wasn't grown until 1882, when Andrew York established Ascension Winery (actually now in the York Mountain AVA, adjacent to Paso Robles AVA). As of July 2010, the vineyard is now part of Epoch Wines. It is the longest continuously operating winery in County. In the 1920s, Italian families starting vineyards included Dusi, Martinelli, Busi, Vosti and Bianchi, some of which might sound familiar, as they are still being farmed today by the third and fourth generations of the family.
Paso Robles is known for the diurnal temperature changes (daytime-nighttime temperature swings, where the difference can be as much as 50°). The primary climate is defined by long, hot, dry summers and brief, cool, sometimes rainy winters. Paso Robles enjoys long-lasting, mild autumns and occasional early springs, giving the region a unique climate suitable for growing a variety of crops. Due to the somewhat close proximity to the Pacific Ocean, the marine layer occasionally makes it over the coast range and into Paso Robles, creating occasional fog. The marine layer, and cooling effect from the coast, creates completely different growing conditions on the west side versus the east side. Soils range from weathered granite, old marine sedimentary rocks, volcanic rocks and young marine sedimentary rocks featuring calcareous shale, sandstone or mudstone. Most of the top vineyards are located on the west side. These are hillside vineyards planted in calcareous (limestone) and dense clay-based soils. Combine that with relatively plentiful rainfall, and it is possible for some vines to be dry-farmed without supplemental irrigation. Additionally most vineyards are within 10 to 15 miles of the Pacific Ocean. The east side doesn’t have as much of the marine influence, and has more rolling hills, versus the foothills of the Santa Lucia’s. The distinct microclimates and diverse soils of the area, create a wine tasting experience unlike most areas. 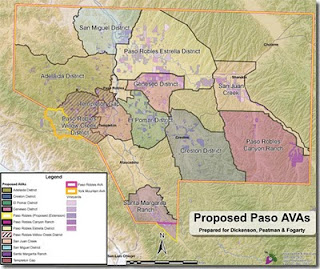 Recognizing the area’s unique, yet diverse terroir, the 617,000-acre Paso Robles AVA and adjacent 6,400-acre York Mountain AVA were established in 1983. In 1990, there were fewer than 20 wineries in and around Paso Robles. Today there are more than 200 wineries in Paso Robles AVA. In 2009,  a new proposal was made to break up the AVA into 11 smaller viticultural areas. It has also been proposed that wineries could list the new AVA’s along with the larger, regional Paso Robles AVA, much like what is currently being done in Napa. So we may see wines labeled “Paso Robles AVA, Adelaida District”, or “Paso Robles AVA, Templeton Gap District”.

Paso may be best known as the home of the “Rhône Rangers”, a group of winemakers who promote the use of grape varieties found in the Rhône Valley of southern France.
The main red varieties used in Rhône wine are Carignan, Cinsault, Counoise, Grenache, Mourvèdre, Muscardin, Syrah, Petite Sirah, Picpoul Noir, Terret Noir and Vaccarèse. Zinfandel is also prominent in Paso Robles, this grape variety has origins in Croatia but grows right along with the Rhône varieties, and is an "honorary member" of the club.
The main white varieties are Bourboulenc, Clairette Blanc, Grenache Blanc, Marsanne, Muscat Blanc à Petits Grains, Picardin, Picpoul Blanc, Roussanne, Ugni Blanc and Viognier.
Paso Robles used to have a reputation for rustic, high tannin and high alcohol wines. My how things have changed. Paso Robles is now one of the most exciting wine regions in California. While I still find those high alcohol wines, I am finding more finesse and balance in the wines produced. Not all wines are Rhône or Zinfandel based wines either. Many Bordeaux style blends, and numerous Italian, and Spanish, varieties can be found.
When I return next week, I’ll share some of my “finds”, and make some recommendations to try.
Posted by The Sommelier: