I often get e-mails from friends asking wine questions. Usually they are wine recommendations, or wine/food pairing questions. This week, I received one from a friend of mine, and I thought it might be worth expanding on. His question, "Quick question...,maybe? In your opinion, where on the west coast of the U.S. is the best Zinfandel grapes grown?"
My response was that "best" is pretty subjective, but that I could narrow that down a little bit. First, California has the "best" Zinfandel, and to narrow that further, I think there are a few regions that do a good job with it: Paso Robles, Lodi (and the Sierra Foothills), and Sonoma/Napa.

Zinfandel has always been referred to as California’s native grape, but that is impossible, as there are no Vitis Vinifera grape varieties that are native to the Americas. It is now thought that it was brought to California during the gold rush, and probably came from the East Coast, via imports from Europe. It is directly related to Italy's Primitivo grape and probably a descendant of a Croatian variety known as Crljenak Kastelanski. DNA evidence is now supporting this theory. While California gets all the attention, Zinfandel is grown in at least 15 other states in the U.S., as well as small production in Australia and Mexico.

Zinfandel is a late ripening grape, so a long growing season is needed, but doesn't respond well to continuous warm weather. Diurnal temperature changes are needed (warm days and cool nights). Soil also makes a difference, as Zinfandel is subject to bunch rot. Well drained soil is ideal. Many of the old vines around the Lodi and California river delta are planted in sandy, well drained, soil.

Harvest is a crucial time for Zinfandel. It is an uneven ripening grape. Within a bunch, you may have ripe grapes mixed in with green grapes and even raisins. The best wineries will make multiple passes through their vineyard to pick only the ripe grapes. Zinfandel also is a high sugar grape, so when fermented, those sugars can convert into a large amount of alcohol (have you ever really looked at the alcohol levels on your bottle of Zinfandel?). With those high sugar levels comes lower acidity, and softer tannins. This helps to emphasize the dark fruit notes that are so typical of Zinfandel. Zinfandel is one of those unique grape varieties that can be made into different styles. From white Zinfandel, to fruity, to spicy to dessert wine, Zinfandel covers the field. Since Zinfandel is a fairly light colored wine, it is often blended with Petite Sirah, which adds a little depth of color. 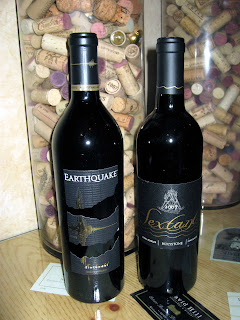 Certain California regions are regarded as "exceptional" for Zinfandel, each with their own particular characteristics:

So, to answer the question of "best"...it would have to be determined by the style you like. I like Tobin James. They seem to make the most of these different styles. You can get full blown "fruit bombs" with their Fat Boy, or drier spicier styles with their Ballistic. I happen to like their Dusi Vineyards label (or anything coming out of Dusi Vineyards)...as it is a nice cross between spicy and fruity. My wine club just had a Zinfandel from Napa (Buehler Vineyards) and it seemed to be the favorite of the night. One of the nicest Zinfandels I've had was Ancient Peaks, however they are hard to find, and even when you go to their winery, their inventory may already be depleted. If you look at wine ratings, the Russian River, Dry Creek, Napa Valley, Paso Robles and Lodi seem to get the high ratings, but again, it depends on what you like, as to which region is the "best".