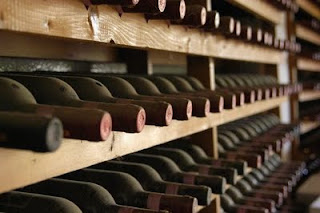 It’s probably not one of those things you really think about, but what was the color of the last wine bottle you opened? What shape was it? What size?  Have you ever wondered why the standard size bottle is 750ml.


Why the standard sized wine bottle is 750ml, is not entirely clear, it has simply evolved into the standard size by custom. You could argue that the old imperial bottle of one sixth of a gallon may have something to do with it, but it could also be that 750ml is just about the right amount for a meal for two. Two to three glasses per person in a bottle. There is a story that 750ml is the size of bottle that could be hand-blown with a single lung full of air. The bottom line is that no one is really sure.


The color of the glass used for wine bottles are also based on tradition, and can be used to identify the type of wine. Dark Green typically indicates a red wine, while light green is used for dry white wines. Clear, or amber glass is used for sweet white wines. In the Mosel and Alsace, this can be confusing, as wine bottles can be dark to light green, but others have traditionally used amber. Champagne has traditionally used dark to medium green, but Rosé champagnes are usually colorless or green. Clear bottles have recently become popular with white wine producers in many countries, most notably New Zealand. Most red wine worldwide is still bottled in green glass. In general, dark bottles protect wine from the damaging elements of light. Lighter bottles are meant for more immediate consumption. 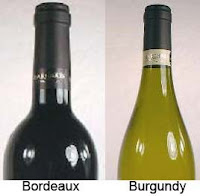 At the bottom of most bottles, there is an indentation. This is known as a punt (or kick-up). There is no consensus on the purpose of this, but the most likely explanation is that it is a tradition leftover from the days when wine bottles were hand blown. Hand blowing glass required the use of a pontil, a technique which left a “punt mark” (a word derived from “pontil”) on the base of the bottle. By indenting the point where the pontil was attached, the scar would not scratch the table or make the bottle unstable. This also had a function of making the bottle more stable, and less likely to tip over, if there was some imperfection in a flat bottomed bottle.


Bottle shapes can also give you a clue as to what is inside, and once again are based on tradition. Bordeaux style wines come in straight-sided / high-shouldered bottles, with a pronounced punt. Port and Sherry bottles are similar. Burgundy and Rhone style wines come in tall bottles with sloping shoulders and a smaller punt. The wines of Germany (Rhine region) and Alsace come in narrow / tall bottles with little or no punt. Sparkling wines follow the Champagne tradition, and come in thick walled, wide bottles, with sloping shoulders, and a pronounced punt. Many of you will be familiar with the old traditional Chianti bottle, known as a “fiasco”. This is a round bottomed flask-like bottle nestled in a straw basket. These are usually seen only in the everyday Italian table wines, as most serious producers are using the Bordeaux style bottle. Obviously, there are other types of bottles out there, and a producer can create any type of special bottle with today’s glass making techniques. However, these are the traditional bottle styles.


Probably one of the more confusing issues is bottle size. The traditional bottle is 750ml, but there are many other choices, most of which are rarely seen by the average wine buyer.


Split/Piccolo/Pony -187 ml
Half-Bottle - 375 ml or one half of the standard bottle size.
Standard Bottle - 750 ml
Magnum – 1.5 liters or two bottles.
Double Magnum - 3.0 liters, or the equivalent of 4 standard bottles.
Jeroboam - There are two sizes of Jeroboams: the sparkling wine Jeroboam holds 4 bottles, or 3.0 liters: the still wine Jeroboam holds 6 regular bottles, or 4.5 liters.
Rehoboam - Champagne only - 4.5 liters or 6 bottles.
Imperial - 6 liters or the equivalent of 8 bottles. Bordeaux shaped bottle
Methuselah  - Same size as an Imperial (6 liters) but is a Burgundy-shaped bottle.
Salmanazar - 9.0 liters and holds 12 regular bottles.
Balthazar – 12.0 liters and holds 16 bottles.
Nebuchadnezzar – 15.0 liters and holds 20 bottles of wine. 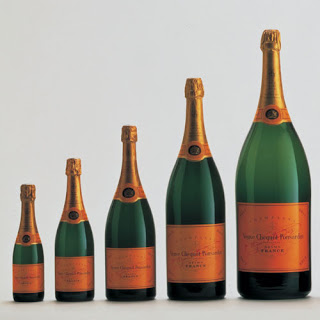 Most of these are ancient names, derived from the names of kings mentioned in the Bible. They seem to have been fanciful creations, dreamed up by a someone, on the basis of the Biblical associations of jeroboam. Jeroboam, for example, was a king of Israel.

So, the next time someone presents you with a blind tasting, observe the bottle they are pouring from...it might just give you a clue as to what's inside.
Posted by The Sommelier: