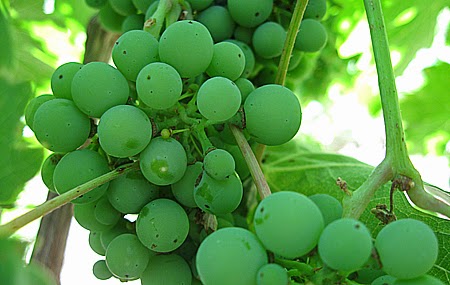 Are you getting tired of the same old oil and vinegar for your salad? How about trying something a little different? This week, we take a look at verjus (pronounced vair-ZHOO).

Verjus is also known as “verjuice” in the United States. It is a highly acidic juice made by pressing unripe grapes. Traditionally it is made with the grapes that are thinned from the vineyard crop (known as "green harvest" or "crop thinning").  Early in the growing season, most good vineyards will thin the clusters of green, unripe grapes.  By doing so, the vines can focus their energy on the remaining clusters, thus producing a better crop, and ultimately a better wine. Verjus is really nothing more than sour, acidic grape juice, made from the high-acid, low-sugar grapes. The word “verjus” derives from the middle French term vertjus, literally “green juice”. 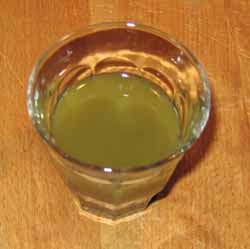 The production of verjus was a natural outgrowth of the wine growing regions of the world. The use of verjus was first documented in early Rome. Verjus has been used since the Middle Ages, and has become more popular in recent years. With the western preference for lemon to acidify foods, it has taken a while for American wineries to catch on, and increase the production and use of verjus. It is still widely imported from France.

Middle Eastern countries produce and make verjus too. Verjus is known as “husroum” in Arabic, and is used extensively in Syrian cuisine. In Lebanon it is “hosrum”, and in the Persian regions of Iran and Azerbaijan, verjus is called “ab-ghooreh”.

Verjus can be made from red or white grapes. Typically, red verjus has an earthier flavor, and can range from gently floral, to rich and hardy. The white verjus is usually lighter, with a crisper taste. Unlike wine, verjus is not fermented, so is non-alcoholic. But, like wine and vinegar, each varietal, and brand, will have a distinct aroma and taste.

In the Middle Ages, Verjus was widely used all over Western Europe as an ingredient in sauces, as a condiment, or to deglaze preparations. It has a gentler flavor than vinegar, and is often used to increase the flavor in mustards. Since there is no alcohol in verjus, the flavor will not interfere with wine, thus making it ideal for wine pairing recipes. Verjus provides a comparable sour taste component, without "competing” with (or altering the taste of) the wine, the way vinegar or lemon juice do. This is one reason modern cooks are using  verjus in salad dressings as the acidic ingredient, particularly when wine is going to be served with the salad.

So how can you use verjus? Obviously, salad dressing and condiments are a “no-brainer”, but how about using to de-glaze a pan? Any recipe that calls for red wine vinegar, red verjus can be a good, wine friendly substitute. It is particularly good in sauces for meat, spicy foods, and great for marinades.  If a recipe calls for white wine vinegar or lemon juice, then use white verjus. Perfect for chicken and fish dishes, or even in beurre blanc sauce.

Once you have opened your verjus, it will keep, re-corked, in the refrigerator for 2 to 3 months.

Verjus is readily available at specialty gourmet stores, and even at some winery gift shops. There is a large selection available on Amazon.com, and also some on igourmet.com. Prices range from about $10.00 to $50.00. One of the best known in California is Navarro Vineyards Verjus.
Posted by The Sommelier: