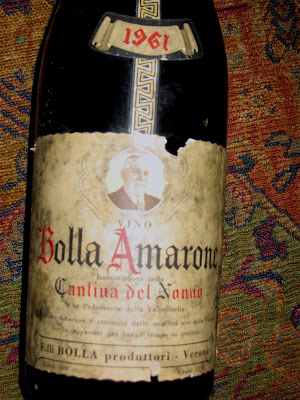 This week, I had the opportunity to be on Grape Encounters Radio program again. The host, David Wilson, is a longtime friend, and follower of this blog. He had read last weeks article about Barbera, and thought it might be an interesting subject to discuss on his radio program. The show will air on Saturday, August 3rd. Here is the podcast.

As we discussed Barbera, the topic turned to one of David’s new favorite wines: Amarone. I haven’t done an article about this unique Italian wine, so this week, I share some of the basics you might want to know. 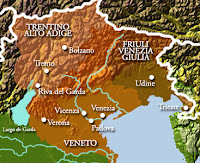 To understand Amarone, we need to first take a look at Valpolicella. This is probably the most recognized wine in the Veneto region of Northeastern Italy. Valpolicella translates to “valley of many cellars”, and is made from a blend of grapes: Corvina, Rondinella, and Molinara. I’ll talk briefly about each grape in a bit.

The best wines come from a series of ridges and mountain valleys (the 4 valleys—Garganago, Fumane, Marano, and Negrar constitute the “Classico” zone which is about half of the total area of Valpolicella). While the “Classico” zone would indicate that these are classic examples of the wine, there is no guarantee of quality. It still comes down to the terrior and the winemaker.

As I said earlier, Valpolicella is a blended wine. Usually consisting mainly of the Corvina grape, plus Rondinella and Molinara in supporting roles. Corvina is the most important grape, due to the aromatics it contributes: floral and dark cherry notes. It is, however, low in phenolics (color and tannin), and also high in acidity. Rondinella has firmer tannins, is higher in sugar and in color than Corvina, which helps balance the wine. Rondinella is also important in the production of Amarone, as you will see. Molinara is the lost partner in the blend. It really doesn’t add much to the blend, except as a filler.

…Amarone (classically known as Amarone Della Valpolicella) is an appellation for a stylistic technique, and the zone is identical to that of Valpolicella, including the classic zone. Because of the international success of Amarone, the best grapes in the region are reserved for this style of wine (it is difficult to make first-rate wine from second-best fruit, hence the reason for regular Valpolicella being second rate).

So what is that “stylistic technique” that makes Amarone so special? Amarone is a “passito” wine. It has gone through a process known as “appassimento”. The process involves drying grapes to concentrate their sugars and flavoring components. During the process, which may take anywhere from several weeks to several months (though 3 months is common) depending on environmental factors and the desired wine style, the grapes suffer the evaporation of water and lose 25-40% of their weight. It is a very rigorous technique, and wines produced by this method are typically expensive. The grape bunches are carefully selected (only perfect ones will do) and hand harvested, and transported in a single layer to the winery. They are then laid out on bamboo mats in special sheds or barns which are increasingly equipped with dehumidifiers. The first two weeks are critical, as rot can set in, and ruin the entire vintage. Fermentation traditionally starts up in the winter, and is always difficult to get going given the sugar level of the must and the cool winter temperatures. I had mentioned earlier about the importance of Rondinella in the production of Amarone. It is particularly important for dried grape wines because it has berries that are smaller than Corvina, and dry faster, reducing risk for the producer.

So, here we have semi-dried grapes, and we are making wine. Everything has been concentrated, and the cool weather has made it hard to even get a fermentation going. The yeast is challenged during the entire process. When you have high sugar levels, you can get a “stuck fermentation” (where the sugar wins, and the yeast dies off). In this case, you are left with a lower alcohol wine and residual sugar. These wines are known as “Recioto” (Italy’s answer to Port). But, when the yeast wins, the sugar is converted to alcohol, and we have “Amarone”. Because of the drying-process, Amarone is a high-alcohol, high-extract wine. The lowest alcohol versions will start at about 14% (the minimum, by Italian law) and 14.5-15% is common; some, however come in above 15% and even as high as 17% (similar to Zinfandel).

The best versions of Amarone have intense cherry/kirsch aromas and an earthy complexity. Roasted flavors, raisins, caramel, coffee, chocolate, tar, barrel-spice are common descriptors. Amarone ages well, but in the highest alcohol wines, they occasionally run the risk of drying out, and losing all fruit notes. 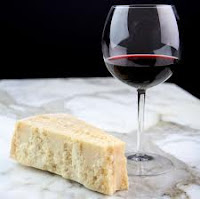 The Italians consider Amarone to be a “meditation wine”, the perfect complement to old cheeses like as Parmesan and Aged Gouda, and to rich blue cheeses like Gorgonzola. In America, we tend to drink wine with a meal, and it can be a great companion, especially to dishes whose preparation is similar to the production of the wine itself, such as long, slow braises of beef and game.

In my interview with Grape Encounters, David mentioned that he had found a wonderful bottle of Amarone at Trader Joe's (he didn't mention them by name, but it was pretty obvious) for around $20. Considering that most Amarone is $40 to $80, it might be worth checking out your local TJ's.

So, are you ready to explore and try something new? I hope you'll share your tasting experience.