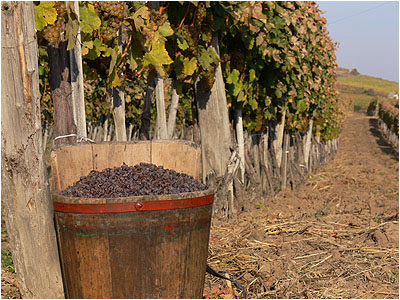 One of the joys of being a wine educator is when you get to introduce students to regions and wines that they might otherwise never try. This week we were studying Austria and Hungary, focusing on the main regions, and their historical wines. When we got to Hungary, the focus was on Egri Bikaver (Bull's Blood) and Tokaji Aszú.

As you might imagine, the Egri Bikaver garnered interest due to it's name and history. There is no bull's blood in the wine, but the Kekfrankos grapes does make an interesting wine that would be great with pizza. Where the "aha" moment occurred was with our last wine of the day, Oremus Tokaji Aszú 3 Putt. At the moment of tasting, I could literally see the students faces light up, and the conversation increased. This was a wine, unlike any others they had tried.

So, what is "Tokaji Aszú"? What is a "putt"? And, why is this an important historic wine?

Tokaji Aszú is a sweet wine from the Tokaji Hegyalja wine region of Hungary. This region is located in the north east corner of the country, next to the border of Slovakia. The main growing region is located on a plateau of south-facing slopes close to the Tisza and Bodrog river. The weather conditions are perfect of the development of Botrytis Cinerea, or "noble rot". There are a number of grapes grown in the region, but the two most important are Furmint and Hárslevelü, which will account for about 90% of the blend in the wine. The remaining grapes are: Sárga Muskotály (also known as Yellow Muscat), Zéta, Kövérszőlő, and Kabar

No one is sure how long sweet wine has been made in the region, but written records show that it predates French Sauternes, and could possibly be the first "noble rot" wine produced. It gained worldwide recognition in the 18th century when King Louis XIV, of France, crowned it as "Vinum Regum, Rex Vinorum" or "the king of wines and the wine of kings".

The production of Tokaji Aszú is also interesting. The botrytis affected grapes are individually picked in 20 to 25kg containers, known as Puttonyos,  The grapes are pressed gently under their own weight and the first run juice is referred to as eszencia.  This juice can be set aside to make the Eszencia wine.  The aszú berries are then very gently pressed and blended with a base wine made from ripe, but non-botrytised grapes, then fermented in large, 136 liter casks, known as "Gönc". The sweetness of the final product is defined by the number of puttonyos of paste added to a Gönc. This can range from 3 "putts" to 6 "putts". Above 6 "putts" the wine is called,  Aszú-Eszencia. The Gönc are traditionally not topped off, and the wine is left to slowly oxidize with the yeasts and bacteria. Alcohol content of aszú typically runs higher than 14%. The challenges of fermenting due to the heavy amount of sugar (500 g/l to700 g/l) in the Aszú-Eszencia, the alcohol content remains much lower. The Aszú-Eszencia wines are some of the most expensive wines in the world, often exceeding $1,500/bottle, but they are also able to age hundreds of years.Aszú-Eszencia is not really a wine in the conventional sense, but rather an elixir

Aszú is filled into Tokaj’s unmistakable trademark half-liter (500ml) colorless bottles that have remained unchanged for centuries. The wines are medium deep amber colored wines, with bouquet and the taste of coffee, honey, apricot, sun-dried fruits and a long finish.

Tokaji Aszú wines are traditionally served at the end of the evening or as an aperitif. They also pair well with white meat in sauce, game, blue cheeses, and desserts. Once opened, these wines can be kept for several weeks in the refrigerator. The wine should ideally be served between 50 and 54°F.
Posted by The Sommelier: