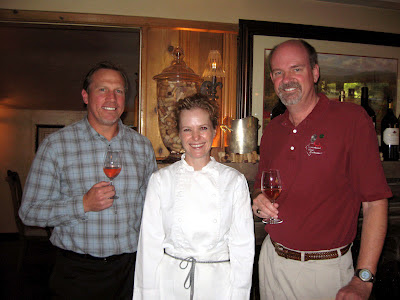 Last month I shared with you, the process involved in putting together a winemakers dinner. Well, after five years that dinner came together last night at Casual Elegance.

Two months in advance, the dinner had sold out, and anticipation of the event had built. The guests were scheduled to arrive for a 5-course meal paired with the wines for Dragonette Cellars. Obviously, the wines were a draw, but having John Dragonette there, to present his wines, and share his wine stories, added to the excitement factor. 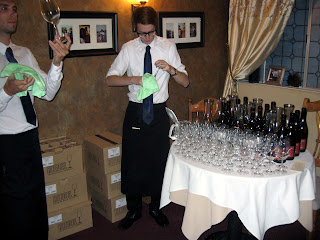 Those of us involved with the winemaker dinner arrived well before the guests. Chef Kathleen was already there when I had arrived at 5:30. The stove and oven were already in production mode, and the staff had just finished arranging the tables. The red wines had been opened up hours before, and were poured into decanters to help aerate them. The boxes of Riedel glassware were opened, glasses washed and polished. John Dragonette showed up a few minutes after me, and was introduced to the staff, and he discussed his wines with all of them. 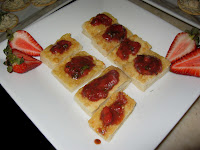 At 6;30, the guests started to arrive, and were presented with the first wine of the evening: Dragonette Cellars 2011 Rosé, Santa Ynez Valley. This was a wonderful, dry rose made of Grenache, Mourvedre and Syrah. The fresh strawberry and raspberry aromas worked well with the appetizers that were carried around by the service staff. They presented the guests with a Smoked Salmon Mousse on flat bread, and a second appetizer of Strawberry Foccacia. 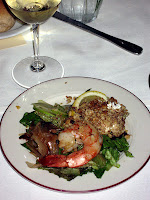 By 7:00, the guests had found their seats at the table, and staff brought out bread baskets of fresh rolls and flat bread, accented with sprigs of rosemary. On cue, the guests were served the first course of the evening: a Roasted Shrimp and Goat Cheese Walnut Salad with Granny Smith Apples and Balsamic Dressing. This was paired with the Dragonette Cellars 2010 Sauvignon Blanc, Happy Canyon of Santa Barbara. The wine is a wonderfully complex and elegant Sauvignon Blanc, and not what you would expect if you are used to the austere style wines most associate with the grape. This Sauvignon Blanc is barrel aged with lees stirring, which adds a good amount of body to the wine, but maintains the expected acidity. A very nice pairing! 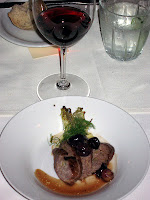 The second course of the evening was a little counter-intuitive. Normally, we would have moved to the Pinot Noir, but we chose to go with the 2010 Grenache, Mourvedre, Syrah, Santa Barbara County. This wine has a velvety smoothness to it, with hints of sweet spices, that just popped out of the glass, when paired with the Roasted Chicken and Apple Sausage, served with roasted Fennel and Grapes. Sometimes, pairings work well, and other times, they are fantastic. This was one of the best pairings I have had with wine...a real "wow". The cinnamon and spice in the sausage worked beautifully with the flavors of the predominately Grenache based wine. 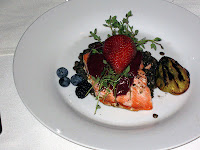 The third course was  grilled salmon filet with French Green Lentils and a Berry Thyme Sauce, and a side of grilled peach. This was paired with the 2010 Pinot Noir, Sta. Rita Hills. The wine is very full bodied for a Pinot Noir, and the berry aromas jump from the glass. There was a lot going on with this plate and the wine, and I felt the wine was overpowered by the entree. If done again, I think I would replace the salmon with a duck breast, as the salmon skin left a fish aftertaste that didn't work with the Pinot Noir. 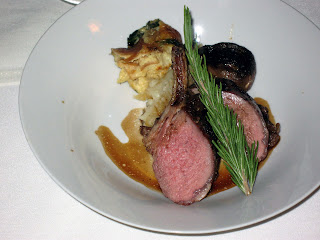 After a palate cleanser of Mango sorbet, the fourth course was presented: Grilled Lamb Chops with Whipped Potatoes, and a last minute addition of savory Bread Pudding. While simple in appearance, it worked beautifully with the last wine of the evening, the Dragonette Cellars 2009 Seven. This was a dense wine, that is predominately Syrah based, with lesser amounts of Grenache and Mourvedre. Is there a better pairing for Syrah than lamb? I don't think so. The wine had been decanted about five hours in advance, but it could have been a day before. This wine will hold for another 3 to five years, and will be wonderful. The marriage of meaty flavors in the wine, worked with the slight gaminess of the Lamb. The last minute addition of a savory bread pudding helped emphasize the spices in the wine. 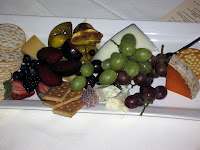 We ended the evening with an assortment of cheeses, purchased at the new wine & cheese shop in the Lake Arrowhead Village: The Grapevine". Along with the cheese was a mixture of fruits and crackers. Chef Kathleen surprised three of the guests with freshly made chocolate Birthday Cakes. The guests were offered the opportunity to purchase wines, and join the Dragonette Cellars wine club. Those that purchased wine received bottles that were signed by John Dragonette, as keepsakes. 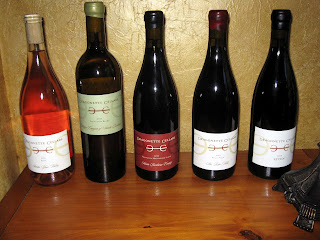 So, after five years of trying to get a winemaker dinner together with Dragonette Cellars, we succeeded in meeting (and hopefully exceeding) expectations. The cost to guests was an incredibly low price of $65 (not including tax and tip). Chef Kathleen Kirk presented the guests with a culinary experience, and Dragonette Cellars has a bunch of new fans. I've been there all along, and I'm happy to have had the opportunity to expose others to this wonderful winery, and one of our local chefs.