A Weekend in Las Vegas


Last weekend, I was one of fourteen people invited to attend the International Sommelier Guild's Teacher Education Program (TEP). Half of the group was from Canada, and the rest from different locations across the United States. This is an instructional program that reviews all the policies, procedures and curriculum of the Guild, and is intended for those that want to become wine instructors. The sessions were conducted by Wayne Gotts (VP) and Roberta Belfry (Dean of Academics). Now before you leave this article, let me tell you up front, that I'm not going to bore you with the three day details of study and presentation. I wanted to share some of the wine experiences our group had. 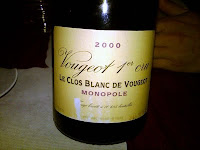 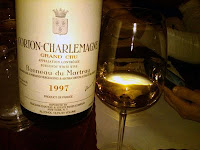 It's been a while since I have been in Las Vegas, even though it is only a little over three hour away (the return trip took twice as long on a Sunday afternoon). When I walked in to the casino, my first thought was, "why are all these people smoking in the building"...not allowed in California. The second thought was, "I'm sure glad they have air conditioning", as it was 104 degrees at 8:30 at night. 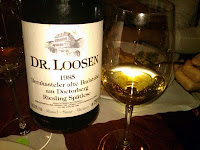 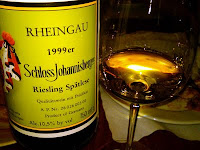 After class on Friday night, ten of us ventured over to the Lotus of Siam restaurant. We had been tipped off that their wine menu was exceptional, and their prices were even better. We were not disappointed. As you can imagine, a group of Sommeliers is an interesting bunch. We started off the evening with a bottle of 2000 Le Clos Blanc de Vougeot (white Burgundy), followed by a 1997 Corton-Charlemagne (which is debatable as to whether it was corked or not...my feeling was that it was just old). By this time we sat down for dinner, and as is the case with large groups, we couldn't decide on how to order dinner, so we left it up to the restaurant. We asked the chef to put together a dinner for our group, and keep the cost around $15 to $20 per person. We were well fed, and the food was great. But, I digress...back to the wine....since this is a Thai restaurant, their selection of German Riesling was outstanding. There was some debate on Kabinett versus Spatslese, but in the end we ordered a 1999 Schloss Johannisberg and a 1985 Dr Loosen Bernkasteler Doctorberg. I've got to say that the Dr Loosen was an outstanding pairing with the Thai food, and the 1985 vintage was wonderful. Believe it or not, each persons' total cost for dinner and wine was $70 (that included tip, and the additional bottle of Champagne Louis de Sacy we had with appetizers).

Now I know I probably lost some of you with the wines I was able to try, but hang in there. I'm sure that Saturday night's wine might be recognizable to most of you. On Saturday, we had our only organized dinner of the weekend, and met at the top of the Palms Casino, at Nove. We were greeted with a cucumber/tequila shot, that was very refreshing, and interesting, followed by Champagne and bottles of Brunello, and Prado Enea Muga Rioja. We had a great Italian dinner, with loads of appetizers, but the real fun was to come after dinner. We were told about this great wine shop that was located in the bottom floor of the Rio Casino. The Wine Cellar is managed by Hung Nguyen. He has the most amazing selection of wines I have ever seen in one place. To start, he has every bottle of Chateau d‘Yquem from 1855 to 1990 (one of only two full collections in the world). Hung invited us into the large cellar, and here we encountered bottles of Petrus, Chateau Lafite, Vega Sicilia "Unico", Sassacia, and Chateau Margeaux (not to mention the other thousands of bottles on hand). All of us chipped in some money and bought a bottle of 1999 Sassicaia, and 1995 Poggio Antico Riserva Brunello. 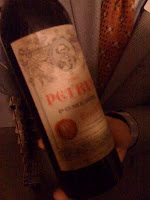 While the weekend was full of course study, presentations, learning, and a bit of stress...the evenings were filled with unbelievable experiences. Spending it with a group of Sommeliers, made it even more memorable. Did you know that Las Vegas has the highest concentration of Sommeliers of any city in the world? I can see why. I made some great new friends, and many of them will be heard from in the wine world. Oh, and for those who were wondering...yes, I completed the course, and am certified as a Wine Educator with the International Sommelier Guild. Now, we just need to find a location and people willing to learn, in the Inland Empire.
Posted by The Sommelier: