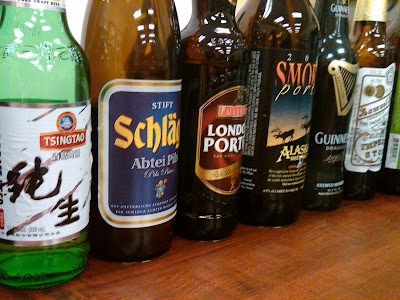 It's been two years since I wrote about beer production, so it's probably about time I circle back around, and satisfy my beer loving friends.

Last weekend, my advanced Sommelier class to a break from wine study, and we spent the day reviewing beer, cider and sake. As we worked our way through over twenty beers, it was evident that there is some confusion as to beer styles, versus beer types. Read on, and hopefully I'll make myself clear.

When studying beer, the process is important, and one of the things a brewer must determine is what type of yeast to use. In most beer courses, you will learn that there are two types of beer: Ale and Lager. I'll argue that there is a third: Lambics. What is the difference between these three? First, Lambics are beers that are fermented with wild yeasts. There is no control over the types of yeasts, and the beers might also pick up ambient micro-organisms (brettanomyces and bacteria) which create this unique, sour beer. The typical flavor profile is dry, sharp, and sour. Sugar (faro) and fruit is often added to balance the sourness of the beer. Lambics are probably the original beer.

The two acknowledged types of of beer are Ale and Lager. Ales are fermented using top fermenting yeasts. These yeasts are no doubt, relatives of the yeasts found in the foaming heads of early beers. the yeasts ferment on top of the beer (or wort) at relatively high temperatures (59 to 68 degrees) for a few days to a week. These top fermenting yeasts leave behind complex esters and sugar, due to their inefficiency. These leftovers result in the complex flavors of ales. Ales generally have a more robust taste than lagers, and are best consumed cool (45 degrees) 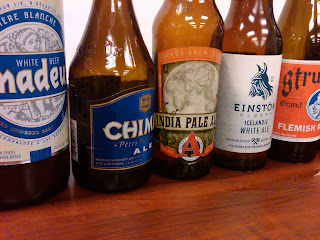 Lagers really didn't come into being until the 19th century, when Emil Hansen (a brewer at Carlsberg) followed up on work done by Louis Pasteur, and isolated a pure yeast culture that fermented at the bottom of the barrel, and at cooler temperatures (39 to 48 degrees) than ale yeasts. These yeasts also take longer to ferment, producing dryer, cleaner, rounder beer with less complexity than ales. As a result of their cool fermenting yeast strains, Lagers have less yeast derived flavors, allowing for a clearer expression of the hops and grain. The word "Lager" comes from the German word "Lagerung", meaning storage, due to the long storage periods required for these types of beers. 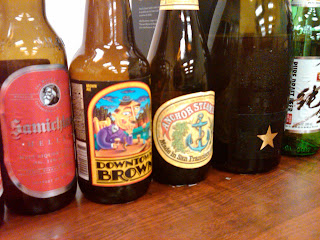 So, depending on how you look at it, we have two or three types of beers, but that doesn't explain the styles. When it comes to styles, there are two many to discuss in a small blog like this. Heck, there are thick books written on the subject, but let me summarize a bit....there are light, pale, hoppy, malty, chocolaty, fruity, wheat, rice, corn, barley...well you get the point. Each one tastes different. In Belgium alone we find Lambics,  Hoegaarden, Red Ale, Gold Ale, Trappist, Abbey, Saison (all ales) as well as Belgian Lagers. Where Belgium is mostly known for ales, Germany is known for Lagers, like Dunkel, Vienna-style, Helles, Dortmunder, Bock and Doppel Bock. Then there are those beers that can be made either way: Altbier and Kölsch. Most British beers are Ales: Bitter, Pale Ale, IPA (India Pale Ale), Barley Wine, as well as heavier beers like Porter and Stout. Americas most popular (at least as far as sales go) are Coors, Budweiser, and Miller - all lagers. 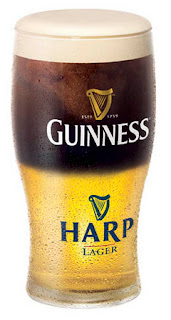 For those of you who have read this far, I've got a couple fast facts about beer, that you can share with your friends.: 1) In the middle ages, beer was the poor mans drink, but essential to their health, as it provided vitamins and minerals, and the alcohol killed bacteria that was prevalent in the water; 2) Beer makes up 85% of all alcohol consumed in the United States; 3) China is the largest producer of wine in the world; 4) Darker beers are usually lower in alcohol and calories than lighter beers, due to the malting process, which toasts the grains, and accounts for the amount of sugars available for fermentation; and lastly 5) Ever wonder why beer is more popular among males versus females? Sour and bitter tastes trigger built-in genetic warning signs in humans that help us spot potentially poisonous foods and liquids. These senses become more acute in pregnant and nursing women, which may explain the stylistic beer preferences of men and women.
Posted by The Sommelier: