Last week, I shared our group wine tasting adventure in the Salinas Valley, and the Santa Lucia Highlands, with Wine Tasting in Monterey Part 1. Our large group of 23, whittled down to ten, that decided to make it a 4-day weekend. I had one winery that I really wanted to visit while we were in the area, and that was Calera. I had read the book, The Heartbreak Grape, as well as tried numerous Calera Pinot Noirs, so I had to finally visit the winery. I called to inform them that a small group of us would be there when they opened, and since the winery was about one hour away, I researched other wineries in the area, and planned our day. 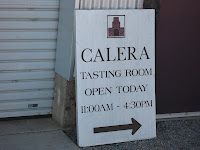 We headed out of the fog in Monterey, and drove up Hwy 101 past the Salinas Valley, and into the Gabilan Mountains in San Benito County. When we reached Cienega Road, we wound our way back in on the narrow roads, lined with oak trees, and rolling hills of brown grass. Just a couple miles short of Mt Harlan (the location of the limestone soil and vineyards for Calera), we came upon the winery and tasting room for Calera. I held out hope that Josh Jensen would be there to greet us, but no luck.

We tasted our way through each of the 2009 Pinot Noir vineyards, and noted the differences between each. I had settled in on the Ryans Vineyard, as my favorite one to hold on to, and store for a few years (a double magnum is now sitting in my cellar). Then, who should walk in the door, but Jim Ryan, the longtime vineyard manager for Calera. For me, this was a highlight of the trip. I should note that Calera is in the process of digging a cave for storage of their wine inventory. The work has just begun at the end of the parking lot. I'm not sure if this will be open to the public once completed.

Next, we drove back down the road, and turned at a group of large warehouse (which I'll talk about soon), and headed up the road. The road was lined by vineyards, and olive trees, and we ended at what can best be described as a Mission Style building. The temperature was already getting up into the 80's, and there was little shade, so after adjusting our previous wine purchases, to protect them from the heat, we headed into Pietra Santa (Italian for "Sacred Stone").

The tasting at Pietra Santa included a large mix of varieties. We tasted whites, rosato and red. From single variety, to blends. The tasting room also had a variety of gifts, as well as olive oil and basalmic tastings. I found their old vine Zinfandel (planted in 1905) to have a lot of depth in flavor, but my favorite was their "super Tuscan" blend, known as Sassolino. The rose of Dolcetto (called Rosato) was also very refreshing, and a nice change of pace from the Grenache based you find all over the central coast. While the rest of the group was tasting, I headed down to the winery, and stumbled upon the large stone olive oil press, imported from Italy. Pietra Santa produces olive oil exclusively from five different olive varieties, grown on the estate.

Our next stop was the surprise of the day, DeRose Vineyards. This winery was on my list to visit, just because of it's historic significance. This is the oldest continually operating winery in California (producing wine since 1851). Eventually the winery was purchased by Almaden, and now owned by the DeRose family. When we pulled up to the large dilapidated looking warehouses, the people in my group were questioning my decision to stop. We walked into the warehouse, and were greeted by Al DeRose, who was ready to pour whatever we wanted to taste. The tastings included wine from Chile (where Al has some vineyards), old vine Zinfandel, and the buy of the weekend....a Claret, made of 75% Cabernet Franc, and the remainder of Merlot and Cabernet Sauvignon. Price? $9 per bottle!

By now we were getting hungry, and we had planned ahead with coolers full of cheese, meats and chocolate (we knew this area was a bit remote, and finding food might be a challenge). Al DeRose offered us two bottles of wine for lunch, and in return, we gave him most of our leftover food.

Next stop was back in the town of Hollister. We drove to Leal Vineyards. The grounds were beautifully maintained, and I can see where they probably get a lot of wedding events. The tasting room was a shock to the system, versus the friendly one-on-one we had at the previous three tasting rooms. The women behind the counter looked like they had just come from a Robert Palmer video shoot ("Addicted to Love" came to mind). All the tastings came from a wine dispensing machine built into the wall behind the tasting counter. This felt very commercial and impersonal. None of us connected with the winery or the wines.

As we drove back to Monterey, I diverted into the town of Salinas, to seek out Star Market. I was looking for a specific wine, and was told that this grocery store not only had the best selection of wines in the region, but also the best prices. Both were correct. Unfortunately, the Lucia Pinot Noir (from the Pisoni Family) was sold out. I'll have to keep searching.

To end the weekend, I had made a group reservation at Casanova in Carmel. This was by far the best dining experience of the weekend. The staff served our large group of 14 people with a great attendance to detail. The wine list was huge, and every bottle was in stock. The spinach gnocchi appetizer was great, and just melted in your mouth. This is a "can't miss" appetizer.  The main course and desserts were excellent, and I must say, the pricing was very reasonable for the quality and quantity.

After dinner, the Maitre d' invited us to visit the 30,000 bottle wine cellar. The collection of wines is extensive, and covers all wine regions and all price points. A real treat for a group of wine enthusiasts.

As it always seems to happen, we had to head back home. We drove back the "long way" by driving up Carmel Valley, We had hoped to stop at a few wineries on the way back, but as we found out, most are not open on Monday, and don't open until 11:00. So, no stops, but we did find that most are located closer to the ocean, and once you get back in the valley, not a whole lot else is there.

Lastly, we made two quick stops in Paso Robles. The first was at Castoro Cellars to meet up with some friends who were staying in Cambria, and then a quick stop at Tobin James. I must add an observation that most in Paso Robles are tired of hearing...but its' true. The alcohol levels in the hotter Paso Robles region were a shock to the taste buds, after coming from the cooler Monterey region, where alcohol stays around 13 to 15% (versus the 16 to 17% we had with most of the Tobin James Zinfandels). 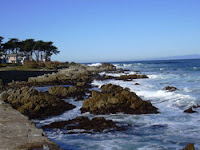 While the wineries are a bit harder to find,  and more spread out, I encourage you to visit the Monterey wine region. Within a one hour drive of Cannery Row, or Fisherman's Wharf, you can find a lot of tastings rooms at both the winery and in-town tasting rooms. The variety of restaurants, plus the scenic beauty of Monterey and Carmel will keep you coming back. Next time up, we'll have to check out the wineries of Santa Cruz!
Posted by The Sommelier: