Put a cork in it…if you are a traditionalist, then this might be your mantra when it comes to that bottle of wine you are about to purchase. Lately there has been a lot of discussion about what might be the best stopper for wine bottles: cork, screwcap, glass, synthetic? I thought it might be worth taking a look at cork (we’ll look at the other stoppers next week) and see what it is and why it’s used.
In the 1600s, the blind French monk, Dom Pérignon, took the first steps towards the use of cork as a wine closure. Containers holding sparkling wine (the glass bottle had not been developed yet, which could hold sparkling wine) traditionally had been plugged by wooden stoppers wrapped in olive oil-soaked hemp. Dom Pérignon observed that these stoppers often popped out. He successfully swapped the wooden plugs for cork stoppers and cork soon became essential for wine bottling.

Cork is actually the bark of the Cork Oak tree. These trees grow mainly in Southwest Europe (Portugal and Spain account for over 80% of cork production). Every ten years, the bark is stripped from mature cork trees (at least 25 years old). This process does not harm the trees, which can live over 200 years. The harvesting of cork takes place during May to August, when the cork separates easily, without causing damage to the tree. 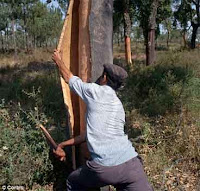 The workers specialized for this job use a very sharp axe-like tool, that they use to make some cuts: one horizontal around the tree, called a crown, and two or three vertical cuts,  called rulers. This is the most delicate phase of the work because, despite using a lot of force to cut the cork, it must not cut into the underlying “mother bark”, whose disturbance could lead to the death of the tree. Following the harvest, the bark is seasoned and sorted. Seasoning allows the cork to stabilize and develop a uniform level of moisture. After seasoning, the cork is boiled to remove organic solids stuck in the pores and to bring it to the correct moisture content for processing. This maximizes the cork's thickness, compressibility and elasticity. The cork is then punched, dried, polished and a thin film of paraffin wax or silicone is applied to each cork, to make it easier to insert into and extract from the wine bottle. Lastly, the corks are packed in plastic bags, with sulfur dioxide gas and shipped to wineries around the world.

Because of the cellular structure of cork, it is easily compressed when inserted into a bottle and will expand to form a tight seal. The interior diameter of the neck of glass bottles tends to be inconsistent, making the cork’s expansion and contraction an important feature. Natural cork stoppers are important because they allow oxygen to interact with wine for proper aging, and are best suited for red wines purchased with the intent to age. However, natural flaws and cracks in the cork bark make its’ sealing ability a bit inconsistent. This would cause the wine to age too fast, even to the point of being oxidized.

The biggest complaint about cork is “cork taint” or “corked wine” What this refers to is a wine fault. There is a noticeable odor that is often described as “moldy newspaper”, “wet dog”…or to me “chlorine”. This is a chemical reaction caused by 2,4,6-trichloroanisole (TCA). However, in recent years major cork producers have developed methods that remove most TCA from natural wine corks. It’s now thought that TCA may actually occur in the barreling process.

When you are in a restaurant, and the Sommelier hands you the cork, what are you suppose to do? Don’t bother smelling the cork, it won’t tell you anything. But do look at it. You can tell several things from a cork. Many are marked with the place the cork was made, as well as the winery the wine came from. The narrower and more misshapen the cork, the longer the cork has been in the bottle. You should also look at the “mirror” (the portion of the cork that has been in contact with the wine). Sometimes you will see small crystals - this is not broken glass, but merely tartrates (or “wine diamonds”), a harmless substance sometimes found in wine that hasn’t been cold stabilized. Also, if the wine has stained up the side of the cork, this may be an indication that the cork has failed, and the wine might be oxidized.


Next week, we’ll take a look at some of the other wine stoppers, and let you determine which you prefer.
Posted by The Sommelier: