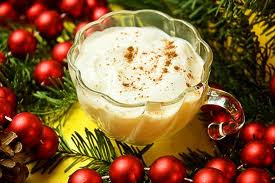 It's that time of year again, and some people either love it or hate it...no, I'm not talking about the holidays or even fruitcake. I'm talking eggnog. I can tell we're in the holiday season as soon as I see the yellow stuff showing up on the grocery store shelves. So what is the history of eggnog, and what do you do with it?

I can't shed any new light on the history of eggnog, so here is what I've been able to find out through some research. Eggnog appears to have been developed in Old England. At the time, only the upper class was able to afford dairy products such as eggs and cream. Also remember that sanitation was an issue back in the day, and one way to ensure that bacteria was killed was with the addition of alcohol (at the time, probably Madiera, Brandy, or Sherry were added). As the concoction moved to the new world, the availability of Rum and Whiskey replaced the traditional additives. 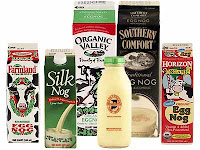 Eggnog is basically a mixture of cream, sugar, raw eggs, and maybe some cinnamon or nutmeg. Nowadays, you can get low fat eggnog, soy eggnog, Organic eggnog, and lactose free eggnog. Under current U.S. law, commercial products sold as eggnog are permitted to contain milk, sugar, modified milk ingredients, glucose-fructose, water, carrageenan, guar gum, natural and artificial flavorings, spices (though not necessarily nutmeg or cinnamon), monoglycerides, and colorings. Personally, I've only found one commercially produced eggnog that tastes any good. See my note below.  Heck, if you are going to drink eggnog, don't worry about the fat content...just drink the best tasting stuff.


There are differing opinions as to the origin of the name for eggnog. One version says that "nog" derives from an Old English word for strong beer, hence “noggin”. Another version attributes the name to early America where colonists referred to thick drinks as “grog” and eggnog as “egg-and-grog”. Either way, we know it today as Eggnog.
Original Recipe For Egg Nog 1859
From ‘The Philosophy of Housekeeping’ By Joseph Bardwell Lyman, 1859

Egg Nog. — Teaspoonful of sugar well beaten with an egg; add a gill* of milk, and then, by degrees, one or two tablespoonfuls of good French brandy; spice with grated nutmeg. (*Gill = a unit of liquid measure equal to 1 / 4  pint)
Recipe By Jerry Thomas in  ‘How To Mix Drinks’ published 1862
Egg Nogg (makes 1 drink) (use a large bar glass)
1 tablespoon of fine sugar; dissolved with 1 tablespoon cold water; 1 egg; 1 wine-glass of Cognac brandy; 1/2 wine-glass Santa Cruz rum; 1/3 tumblerful of milk.
Fill the tumbler 1/4 full with shaved ice, shake the ingredients until they are thoroughly mixed together, and grate a little nutmeg on top. Every well ordered bar has a tin egg-nogg “shaker”, which is a great aid in mixing this beverage. 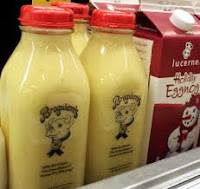 Now most of you will use your holiday eggnog for toasting to friends and family, or sitting around the fireplace. For me, I use it a little differently. First off, there is only one brand of eggnog that I purchase, and that is from Broguiere's Dairy, here in Southern California. Huell Howser visited their facility a while back, and they were featured on one of his television shows. Huell Howser Video.  This is a rich, thick traditional eggnog, with no funky ingredients (you'll know every ingredient on the label). I use this eggnog to make a traditional Christmas Breakfast of French Toast. I take day old French Bread, and dip it in the Broguiere's Eggnog (to which I have added some powered cardamom), then fry in some butter over the stove. This is the best french toast you will ever taste. Add a little Mahogany Smoked Bacon from Meadow Farms Smoked Meats and you have a great breakfast.

So, when you are walking through your local dairy section at the grocery store, take a look at the shelf, and see what they have. Read the ingredients, and if it's natural, buy some and try it. If what they carry is full of ingredients you can't pronounce. try one of the above recipes, and enjoy the holidays!